It is often said that the plasma exiting the coronal hole (of the Sun, obviously) follows the open magnetic field line. E.g. a direct quote:

"Coronal holes are regions of low-density plasma on the Sun that have magnetic fields that open freely into interplanetary space".

So my question is: since the magnetic field is in its essence a solenoidal vector field, could its lines be truly open? That would make the coronal hole a certain magnetic monopole, wouldn't it? Or do they actually close somewhere at the heliospheric boundary, for example?

It's either that or maybe my understanding of electromagnetism doesn't quite fit into plasma behaviour (I've heard this story of "frozen in magnetic field lines", but fail to see how it answers my question), in which case I also ask for some correction/explanation.

Field lines are always closed. The following diagram shows what your book appears to be talking about (from http://soi.stanford.edu/results/SolPhys200/Poletto/uvcs_spiral.jpg): 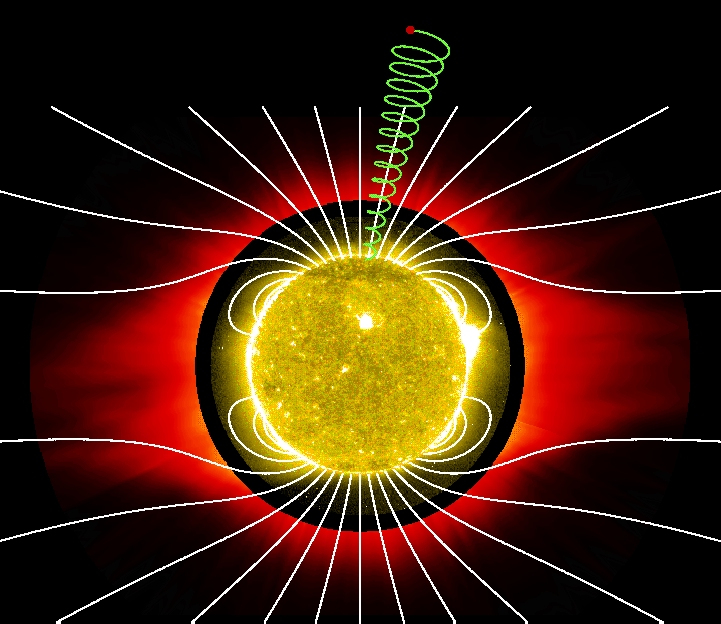 Some field lines look obviously "closed" while others "go off into space". But then they turn around and come back again... something like this:

I found the caption that goes along with this image at

From there I quote (emphasis added by me):

The white rays are lines of magnetic force from a theoretical model of the magnetic field of the Sun at the minimum of solar activity (see Banaszkiewicz et al. 1998, Astron. Astrophys., 337, 940). The polar coronal holes (dark regions on the solar disk and in the extended corona) have primarily open magnetic field lines along which the high-speed component of the solar wind accelerates away from the Sun. In the extended corona viewed by UVCS, the density of particles is so low that individual ions very rarely collide with other particles, and thus they execute spiraling motions around the magnetic field lines (see green curve for an illustration of an example particle's motion).

Not the answer you're looking for? Browse other questions tagged magnetic-fields sun plasma-physics or ask your own question.