I happened to notice this while fidgeting with a coin. It is a common trick to hold up a coin between the index finger and the thumb, place it on the table and give it a good spin. The coin spins about its diametrical axis, while its center of mass follows a trajectory(not circular in general) about some external axis. My observation corresponds to the point of time, when the coin begins to wobble significantly(i.e: it has lost most of its kinetic energy, and will come to rest face down soon.) While wobbling, the C.O.M velocity is non zero,as it keeps moving in trajectories having progressively smaller radii. One will see this while performing this trick. We will notice a peculiar thing. As the velocity of the plane of the coin as it wobbles, decreases, so does the C.O.M velocity, and both reach zero at the same time. In other words, the damped oscillation of the plane of the coin, and the velocity of the coin moving across the table ceases to zero at the exact same time. Why dosen't it happen like:

1) The coin wobbles in a certain region, with the C.O.M coordinate along the table being constant.(it can rise up and down, based on the wobbling, but no horizontal motion)

2) The wobbling stops first, and then the coin skids to a halt across some distance over the table.

How do we prove that both types of motion stop at the same time? Neither of the 2 possibilities i mentioned above are observed in the real phenomenon. Can someone explain?

PS: I forgot to add, but the rotation of the coin stops simultaneously with the wobbling motion, and sliding as well.

You are correct in saying that the two forms of motion appear to stop simultaneously. It would be interesting to look at it with a high-speed camera to see if that is really true, and also to look at various surfaces to consider different friction conditions. With physics, it is essentially impossible to measure a zero, since there is always some measurement error, so determining the simultaneity of the two events is not trivial (in fact it is probably impossible in principle).

However, within your experiment it seems that way, and that in itself is enough to be interesting. The only reason the coin stops spinning at all is because there is some dissipation of the energy. This comes primarily from rolling friction, although towards the very end (which is the part you are looking at), air drag comes into play also. This means that you are looking at an area of messy physics.

However, this does not stop us looking at the physics roughly. Note that the kinetic energy before it stops is, by definition, very close to 0. This is because there is a very tiny amount of dissipation that is gradually bringing the system to a stop, so just before it stops, it has only a tiny amount of energy.

The two main forms of dissipation going on are (1) rolling friction, which is the edge of the coin rolling along a surface, and (2) air friction.

Rolling by its nature has a very low amount of dissipation, far less than sliding in general. So let us consider your two scenarios: 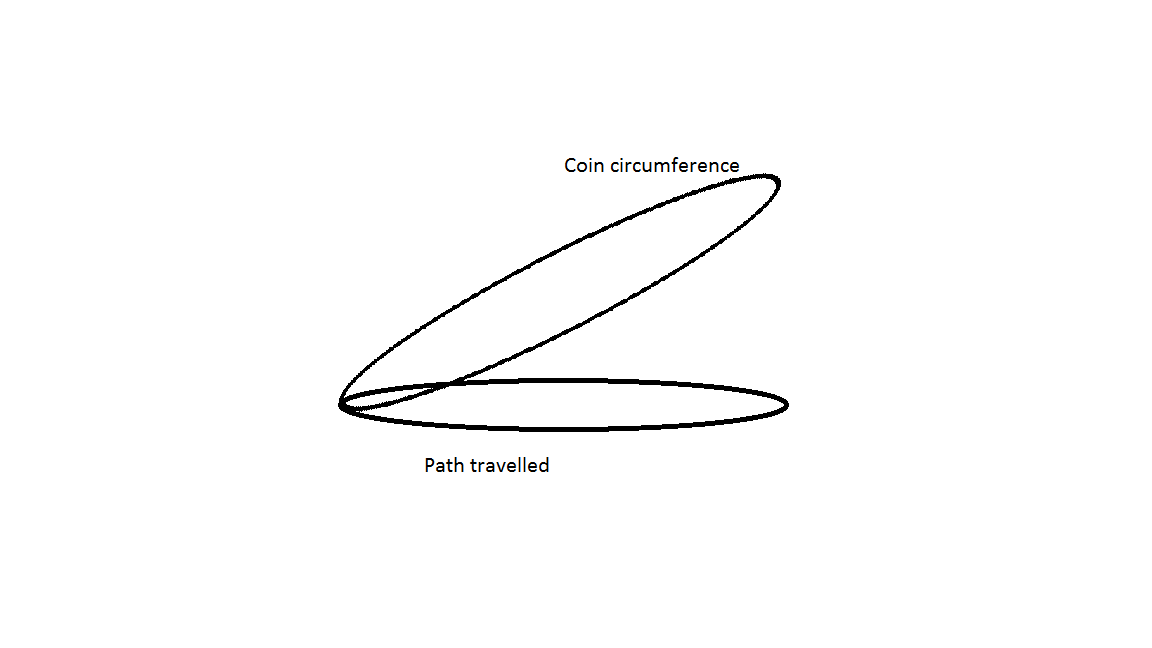 My guess is that number 2 will be detectable in a laboratory setting though.

Edit: I took some 1000fps video of a coin wobbling. It is available here. As I mentioned earlier, it's probably a strong function of the kind of surface you're spinning on and the relative friction. But what is apparent (at least here) is that as the coin gets closer to the surface, the two radii in the diagram above approach each other, and so you might expect the C.O.M. to spiral in to a central point, but only hitting that central point when the coin is flat on the table. In this sense, there is a physical, geometrical reason for the two to converge together and stop simultaneously.

Not the answer you're looking for? Browse other questions tagged home-experiment or ask your own question.

4
Movement of a rotating coin

2
Why does a coin falls faster when it's flipping as well?
4
Can I find the frequency generated by tapping a battery on a coin?
0
Do I need the exact velocity when experimenting with sliding coins?
510
Can I compute the mass of a coin based on the sound of its fall?
1
Can you pre-determine the result of a coin toss?
131
Why is the vibration in my wire acting so oddly?
3
Floating sketchpen?
1
Determining the mass of a rolling cart