In the following video:

DrPhysicsA describes the results of an experiment involving three polarized mirrors randomly selected by the perennial Alice and Bob. 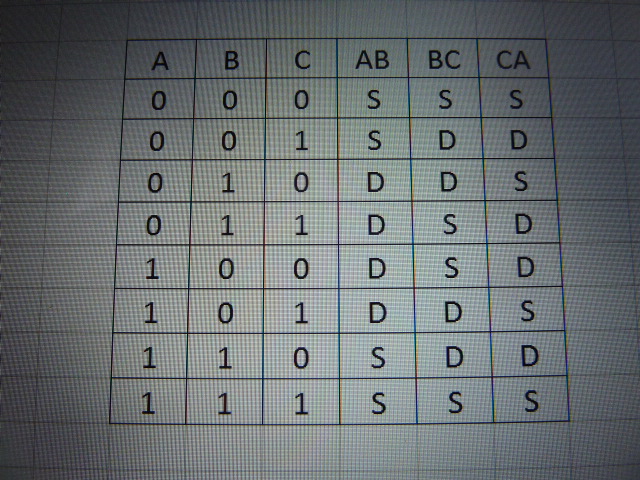 The first three columns represent possible pre-determined polarizations (hidden variables) of entangled photons sent to Alice's and Bob's randomly selected mirrors, A, B, and C. The second three columns represent the possible results of observations by Alice & Bob for three different combinations of mirrors. The results tabulated show that considering only the middle six rows there will be six occurrences when Bob and Alice measure the same result, either no photon is detected by both, or they both detect a photon. According to the presenter this means that they will make the same 33% or more of the time if there are hidden variables, while Quantum Mechanical analysis predicts, and experimental results show 25%. Thus the possibility of local hidden variables is eliminated.

My question is this: On what basis are the top and bottom row of the hypothetical data eliminated from the calculation? Considering all possible results there would be 12 "Same" observations out of 24 possible results, or 50% instead 33%. Also, when running the experiment, it would not be possible to exclude a top or bottom row from the results. Any "Same" looks like any other. So why are only the six middle rows counted?

Independent of the question of which rows you count, the presenter's claim (at least in your paraphrase) does not make a whit of sense unless you add the observation that each row is equally likely --- and this isn't something you want to assume.

The important point is that no matter what probabilities you assign to the different rows, the implied probabilities for the experimental outcomes cannot match what we actually observe. That's a far far stronger statement than what you're quoting here, which is only about one particular set of probabilities (namely zero on the first and last rows and 1/6 for all the others). That's not something you can learn from naive counting (though you can learn it from some fairly simple algebra).

Not the answer you're looking for? Browse other questions tagged quantum-mechanics quantum-entanglement bells-inequality or ask your own question.

1
In Copenhagen, can this idea preserve locality for Bell inequalities?
1
What are the Implications of Bell's Theorem?
2
Bell's original inequality in "Speakable and Unspeakable in Quantum Mechanics
1
If Alice is moving at relatavistic speeds compared to Bob, is collapse still simultaneous?
1
Do polarization measurements of entangled photons in any basis always produce correlated outcomes?
1
I'm missing something basic in understanding Bell's theorem