How does a geodesic equation on an n-manifold deal with singularities?

My general premise is that I want to investigate the transformations between two distinct sets of vertices on n-dimensional manifolds and then find applications to theoretical physics by:

Well, what an ambitious project. But in any case I have made some progress for the n-dimensional case with n-vertices where the space is "regular" and I haven't introduced advanced mathematics yet. I'm mostly playing around in configuration space for vertices in euclidean space or something similar.

Where $\lambda_{1}$ and $\lambda_{2}$ correspond to the start-point and end-point of the transformation. The members of the gauge group are $s$ (dilatation), $R$ (rotation), and $a$ (translation). $q_{I}^{j}$ corresponds to a point in configuration space representing $I$ vertices and it lives in $j$ dimensions. ($i$ is also a dimension index) 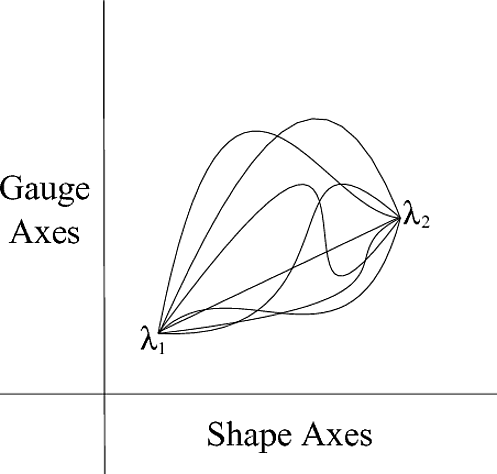 Hopefully, you have a general idea about what I'm talking about, this is at about page 5 in the paper where this is introduced, there is a lot of background that I'm not going to discuss. I've constructed an explicit example with tetrahedra where a tetrahedron is approximated to another tetrahedron in a minimalized manner. Here's a figure I made: 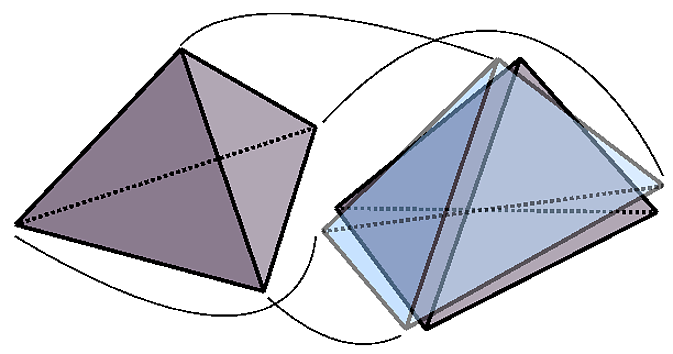 that may help you understand what I'm trying to work with... in any case I'll ask my questions now.

[Optional for the intrigued reader]:

How can I begin to generalize this geodesic equation so that it can comment on spaces with different metrics, or irregular behaviour? As an example of what I am trying to reach for, I would be interested in seeing how a set of vertices could geodesically traverse a singularity in a smooth 2-manifold, and if I could define a general functional for any behaviour on any manifold (I would attempt to restrict it to 2-dimensions to start) eventually. There are two main types of singularities I would be interested in investigating, the first would be the "black hole type" in which a diffeomorphism in the manifold causes "a hole at the bottom". This means that there would be an exponential increase in curvature around the vicinity of the singularity, and I want to find out how a set of vertices deals with those imposed conditions. The other would be for a 2-manifold with no curvature and I know that for a particular configuration of vertices, with the geodesic (based on the equation above) lying along a certain line. If I create a hole (simply remove a point in the same way you can create a hole in a single-variable piecewise defined real function), what happens to the geodesic? How can I encode this information, so it either pushes right through the hole somehow, or defines a new path around it?

Main Question: For a functional (assuming I could derive one) that gives the path from a distinct set of vertices to another in an n-dimensional smooth manifold with shape preserving characteristics. When a singularity is introduced into the manifold, will the geodesic equation:

You seem to be describing some interesting work, although the presentation above makes it tough to understand exactly what you are doing and what you would like to do with it. Perhaps you could link to the paper you allude to above.

Anyways let me first point you in the direction of some work I think is related to what you are trying to do, for instance: http://citeseer.ist.psu.edu/viewdoc/summary?doi=10.1.1.18.4543, and references within.

As to your main question, I believe that it will be strongly dependent on precisely which geometry you put on your manifold. The geodesic equation (in some coordinate chart) is just a differential equation, and so you will have to use the analysis of singular points from the theory of differential equations (is the singularity for instance regular or irregular: http://en.wikipedia.org/wiki/Regular_singular_point). So I think that any concrete answer to your main question is impossible unless you can provide a concrete example you would like to study.

Finally let me just say that for applications to general relativity and black holes, presumably you would want the geometries you are studying to result from solutions to the Einstein field equations. Of course, black hole solutions have different types of singularities: coordinate ones (which are non-essential and can easily be removed by changing coordinates) and essential ones where things become undefined and physical problems result, for this however there is of course the cosmic censorship hypothesis: http://en.wikipedia.org/wiki/Cosmic_censorship_hypothesis.

Not the answer you're looking for? Browse other questions tagged research-level differential-geometry gauge-theory singularities geodesics or ask your own question.