I am currently doing a solid state physics class and am stuck on a concept regarding molecular orbital (MO) hybridization.

As an example consider an HF molecule bonded along the z-axis. This molecule will form a $\sigma_{1s-2p_z}$ bond between the 1s orbital of the H atom and the $2p_z$ orbital of the F. However, the $2p_x$ and $2p_y$ F orbitals can't form a hybridized orbital because their nodal symmetries are not along the bonding axis.

AO’s must have the same nodal symmetry (as defined by the molecular symmetry operations), or their overlap is zero.

Any illumination on these points to help my understanding would be greatly appreciated.

MO's form as an interaction between two Atomic Orbitals (AOs) and mathematically can be seen as the linear combination of two AOs.

MOs can be formed when some conditions are met: 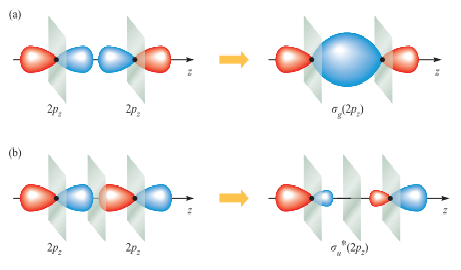 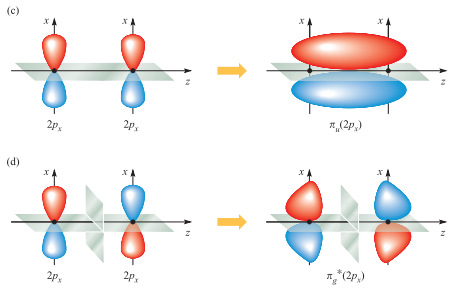 The cases (b) and (d) above lead to anti-bonds because the orbital lobes are of opposite sign (as indicated by colour).

3. AOs must be of comparable energy levels.

Hybridisation features heavily in Valence Shell Electron Pair Repulsion theory. Hybridisation minimises the potential energy of many molecules by minimising the electrostatic repulsion between the MOs.

It explains the bond angles for compounds of the $EX_n$ ($X$ is a halogen or hydrogen, $E$ is some element) group of binary compounds. For example, methane's ($CH_4$) tetrahedral structure is explained by it, because that bond angle minimises electrostatic repulsion between the MOs (four $\sigma$ MOs from linear combination of (hydrogen) $1s$ AOs and hybridised $sp^3$ carbon AOs).

The hybridisation process can be schematised as electron configurations as follows:

For carbon the $sp^3$ hybridised AOs look like below. For clarity the AOs have been presented separately, with white dots representing the C-nucleus: 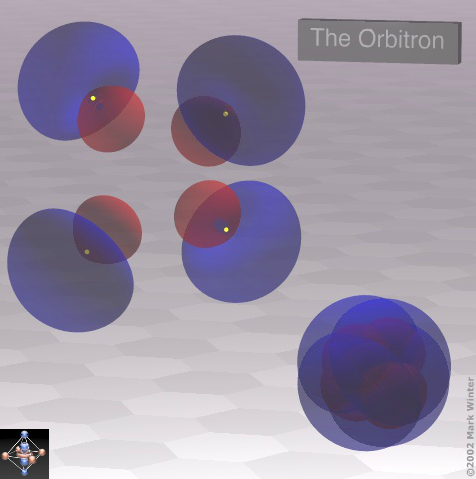 The molecular shapes and bond angles for $EX_n$ compounds, due to hybridisation of MOs: 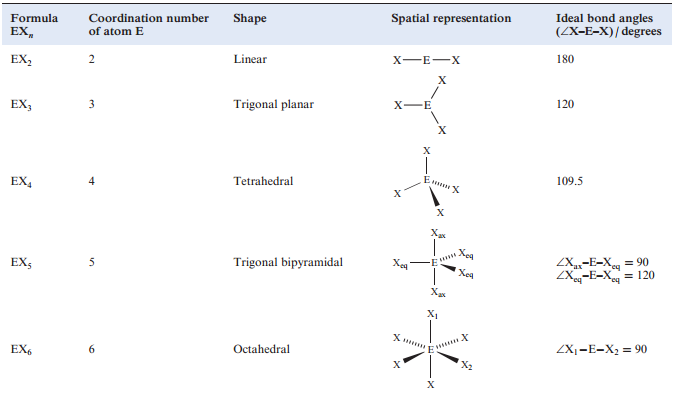 Edit: in response to OP's question in the comments.

$s$ and $p_{x,y,z}$ orbitals can combine to bonding $\sigma$ bonds (MOs), as long as one of the $p$ lobes lies on the inter nuclear axis (the axis connecting the nuclei of the bonding atoms) and provided the energy levels of the $s$ and $p$ are not too far apart: 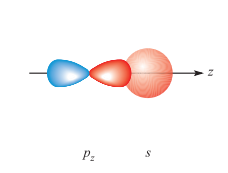 What we call that $p$ orbital ($x$,$y$ or $z$) is a matter of convention, as we can choose the coordinate system to our convenience. Conventionally, the one interacting with an $s$ is set to $z$.

Now have a look at this, bonding and anti-bonding between two $1s$ AOs: 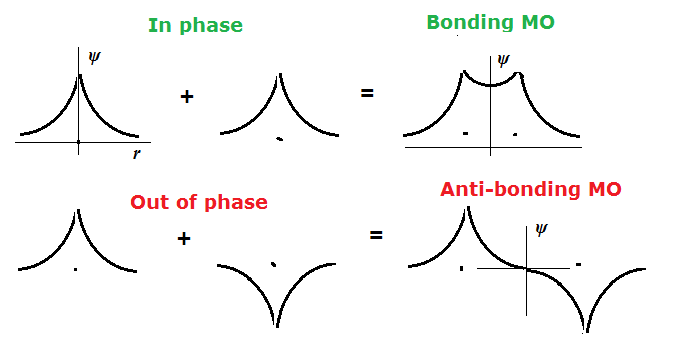 In the top situation a bonding molecular orbital has formed. See how in the top part the value for $ψ^2$ between the nuclei (represented as dots) is positive. This means there is considerable probability of finding the electron(s) in that region and this is where they reduce the electrostatic repulsion between the (both positively charged) nuclei. A $σ_{ss}$ ($σ$ for short) has formed and a $H_{2}$ is born.

But in the bottom part for $ψ^2$ between the nuclei is zero and with no electron presence in that region there is nothing to prevent the electrostatic repulsion between the nuclei from ripping the ensemble apart. This orbital is called an anti-bonding molecular orbital, noted as $σ^*$.

The same principle holds for other types of bonds: the interacting lobes must be in phase (of the same sign - i.e. colour in the figures higher up).

Not the answer you're looking for? Browse other questions tagged molecules orbitals or ask your own question.

2
Explanation on Atomic Orbitals and Molecular Orbitals
5
Is there any significance of atomic orbitals?
2
Orbital plot to explain bonding and anti-bonding molecular orbitals
2
Molecular orbital theory
1
Notation of complex valued atomic orbitals
7
How does covalent bonding actually work?
2
LCAO - Constructing a molecular wavefunction
1
Why can only orbitals of similar energy interact significantly?
0
Does an electron in an orbital have exactly the same energy as the orbital's shell?