Breathe Air from a source without any pressure compensation?

I just thought about what I'd do if I was on a sinking ship and of course breathing was the first thing that came into my consideration.

Now imagine the ship's front going up and the room you are in being filled with water. An upper edge of the room (where 2 side-walls and the ceiling meet) will be - at one point - the only one containing air (as the rest of it is filled with water). I could swim there and grab some air before trying to escape. But regarding the fact that water doesn't compress very well this will get harder the less volume is taken by the air.

When I think about 100l of air at the described edge of the room I suppose this won't affect breathing too much as I guess there is enough space to compensate the pressure. But let's say there is only 2 liters of air surrounded by said water, do you have a chance? Your lungs won't be able to push the air that much that the water level somewhere else at the ship will rise (maybe at the edge of the room next to you) right?

To eliminate any sources of error let's just assume the room is built out of one piece of steel without any holes, also there is no waves at al. 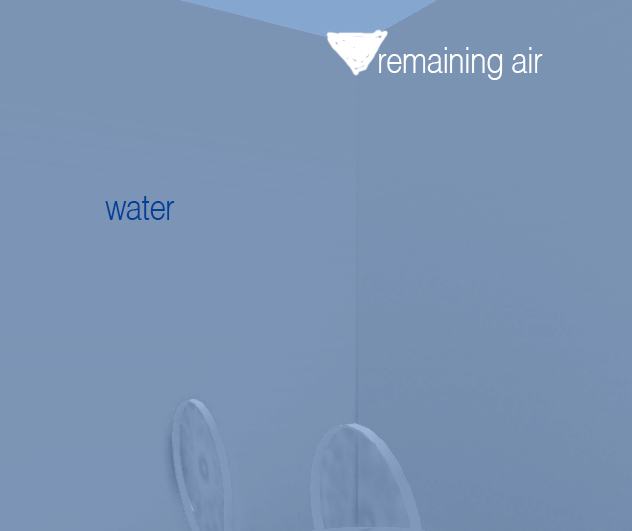 Inhale first and exhale second. Since you are removing a volume of air no problem. It will only matter as you rise to the surface and the air in your lungs expand. That could be a problem.

Almost panicking about the thought of not being able to breathe I noticed my stomach moving - which made me that my stomach which is still in the water will roughly move as much (and therefore make room) as the air I am inhaling/exhaling which should roughly compensate the compression/release of pressure.

But regarding the fact that water doesn't compress very well this will get harder the less volume is taken by the air.

If water is flooding the room, the room must have a breach where water can enter. As such exhaling will just push the water out. The incompressibility of water is not a factor. Only the pressure of the water at the breach.

Not the answer you're looking for? Browse other questions tagged water or ask your own question.

1
How does the temperature in a bucket of water with ice change over time?
6
Can you really breathe through a submerged toilet?
3
Room is being filled with water
5
How do I calculate how long water will take to warm from 22°C to 35°C?
1
Do sound waves in the ocean reflect off the surface at 90 deg incidence?
0
Hydrostatic pressure to measure water level
2
Falling elevator filled with water
19
Freezing water: in layers or all at once?