Reducing eddy currents, changes the property of the conductor & circuit?

In an attempt of reducing the eddy currents in a conductor, such as having gaps to break the induced eddy currents, would that by any chance change the conductor's orientation from series to parallel?

An example, from the following diagrams: 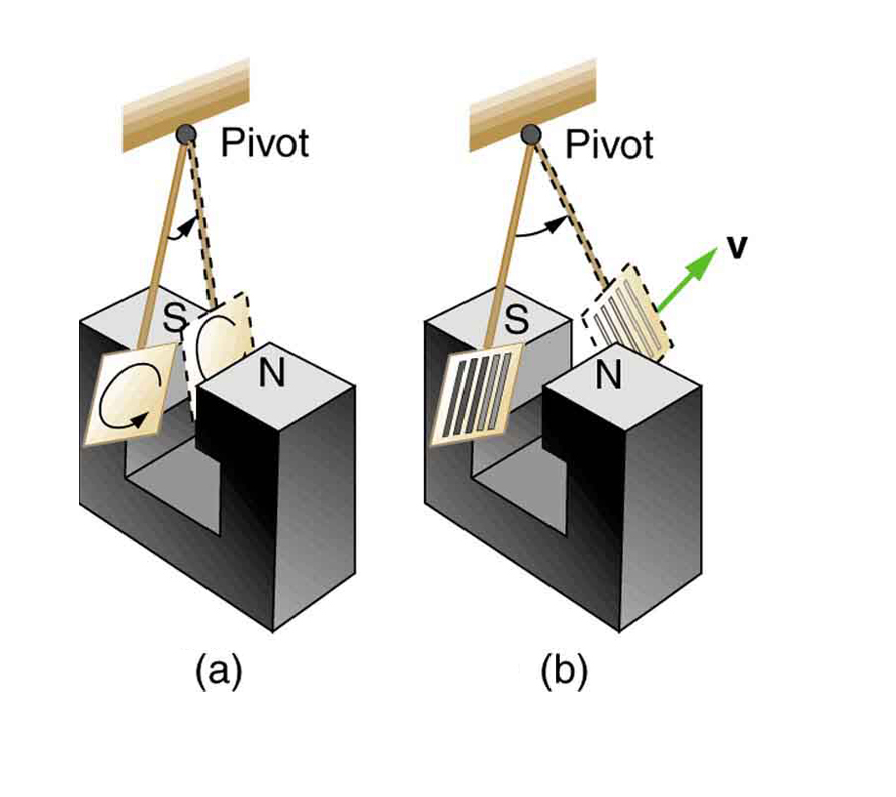 Imagine both diagrams we're connected to a separate circuit somehow. Diagram(a) is a complete conductor inducing high eddy currents, also a series layout with respect to the circuit. However, if diagram (b) was connect to a circuit, would the conductor be oriented to a parallel circuit? Diving out the input current flow all around the conductor or is it still in series, regardless of the air gaps?

I guess, this goes deeper into my understanding of parallel/series circuit, I would understand that it's usually the components(resistors/diodes/inductors/ etc...) that are connected either in series, or parallel to a circuit. But what about a single individual wire, could it be broken down into the same concept?

Wires usually are in series, one whole piece of conductor, when it brakes into branches that would indicate a parallel circuit being formed, but what about the conductor in diagram(b) then?

A bit, odd comparing a single wire to a whole circuit but I hope the question(s) are clear enough.

Reducing eddy current does not change property of conductor or circuit Eddy currents (also called Foucault currents) are circular electric currents induced within conductors by a changing magnetic field in the conductor, due to Faraday's law of induction. Eddy currents flow in closed loops within conductors, in planes perpendicular to the magnetic field. so it happens in any type of conductor providing its orientation should be perpendicular to magnetic field actually eddy currents are undesirable because they dissipate energy in form of heat energy so to reduce them we technically try to reduce the surface area as in above copper plate example so the less area is available for eddy current and henceforth means less energy dissipation in form of heat

Not the answer you're looking for? Browse other questions tagged electromagnetism electric-current voltage or ask your own question.

0
Inductively coupled DC circuit
1
Reducing Eddy Currents?
0
Induced EMF, additive to conductor's closed circuit?
3
Eddy currents on a conductors surface, and induced current flow around the loop both coexist?
1
Induced EMF dependent on terminal wire connection?
1
How to vary the current using batteries?
0
Changing current and magnetic materials in an inductor to genereate eddy currents
0
Ohm's Law Complications
2
How resistance in coils affects the damping of oscillations of a magnet through them