Would it be possible to create a submersible boat engine using the combined principles of electrolysis of water, ramjet propulsion, and hydrogen-oxygen combustion similar to that used in rocket engines?

For example, the engine structure would be similar to that of a ramjet with a small intake opening in the front that lets in water and a wide bell shaped nozzle at the back where the explosive force would be expelled. In the middle of the chamber there would be two wires protruding with one being for positive voltage and the other being ground. The voltage between the two wires would be kept consistently high enough to trigger the electrolysis and there would be periodic voltage spikes (KV range) to create an arc to trigger combustion of the hydrogen and oxygen. 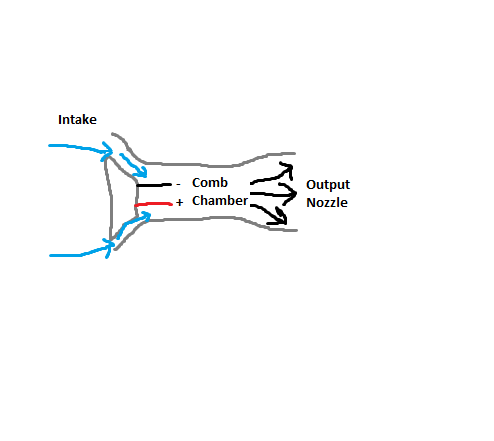 I would think the advantage of this propulsion system would be a lack of moving parts that require waterproofing such as standard propellers and rotary motors. So would this be a feasible method of propulsion or am I missing something? My background is primarily electrical so I could be missing a critical chemistry/mechanical component of the process.

This scheme would be terribly inefficient thermodynamically. Firstly, where is the energy needed to generate the electrical pulses coming from? Secondly, neither the process of electrolysis of seawater or the combustion of the resulting hydrogen and oxygen is 100% efficient.

Finally can this system really generate enough thrust to propel a boat?

But this type of system has inefficiency problems of its own as well. Not the least of which is again, the generator needed to generate electricity for the water current and magnetic field. A conventional propeller driven by a gas or diesel engine on a small boat or geared turbines or gas turbines on a large ship, is much more efficient.

The energy required to split the water into oxygen and hydrogen is quite a bit less than the energy you would get back when you burn it (commercial electrolysis units run at about 70% efficiency). I think that makes this an inefficient method of propulsion.

If you just (electrically) heated an amount of water until it became steam you would reach the same effect. Possible, inefficient.

Sealing moving parts isn't that hard. The engine you propose would be very noisy, too...

Not the answer you're looking for? Browse other questions tagged water physical-chemistry propulsion combustion or ask your own question.