Can UV light make us invisible?

For an object to create different EM waves, it needs to increase the temperature, so what if we or some material could be so hot, that it would emit ultraviolet light, and thanks to that be invisible for the human eye.

I have a lot of questions about this and I would like you to answer me.

Thanks for reading this, and for breaking my dream of making someone invisible, I invite you to day-dream and imagine stupid questions.

You're right that as the temperature increases, shorter wavelengths receive a higher proportion of thermally radiated power, and longer wavelengths a smaller proportion, because of the shifting Boltzmann distribution of your molecules' kinetic energy, and therefore the shifting power spectrum of the light they emit.

However, most of the objects you see around you are not visible because they're thermally radiating, they're visible because visible light from the sun or a lightbulb are reflecting off their surface.

For example, right now you are "glowing" mainly in the infrared spectrum. You are emitting almost no visible light due to thermal motion of your molecules, because you are too cold to emit an appreciable amount of visible light by that process. But even though you aren't thermally radiating visible light, you are still reflecting light from external sources, and thus are perfectly visible.

It's also worth pointing out that while as an object gets hotter, it does radiate a higher percentage of its thermal radiation in higher frequencies, and a lower percentage in lower frequencies, as an absolute measure, the amount of power in any given frequency band actually increases with temperature. You can see this visually in the power spectrum curves in this graph. If you pick any wavelength, the amount of power is greater in each successive temperature curve. That means that when you heat an object hot enough to radiate primarily in the UV, it will actually be brighter in the visible spectrum than at cooler temperatures.

Planck's Law gives us the intensity of black body radiation as a function of temperature:

If we plot a normalized plot of this curve for different temperatures, you see the following: 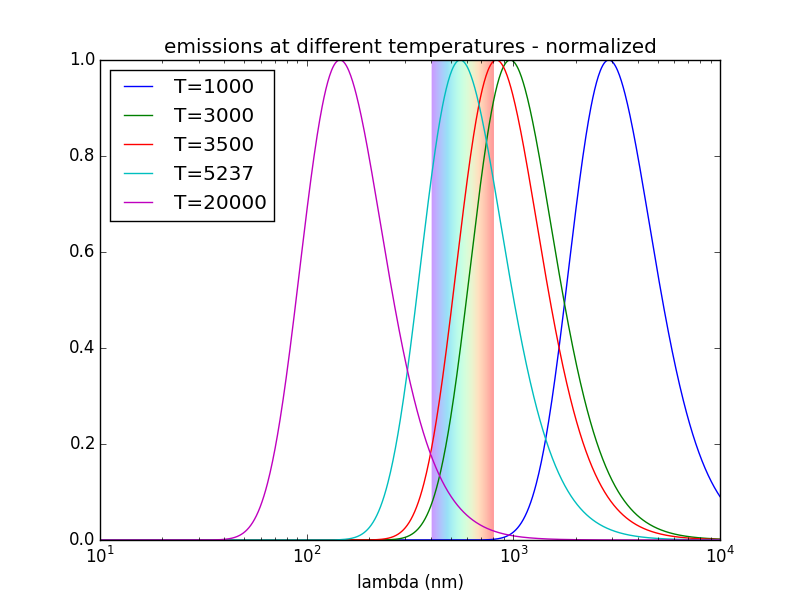 As you can see, it does look like the higher temperatures make the relative intensity in the visible part of the spectrum lower. However, if we plot the absolute intensity (I can't figure out how to show the visible colors on this plot, sorry) you need a log scale to see what is going on: 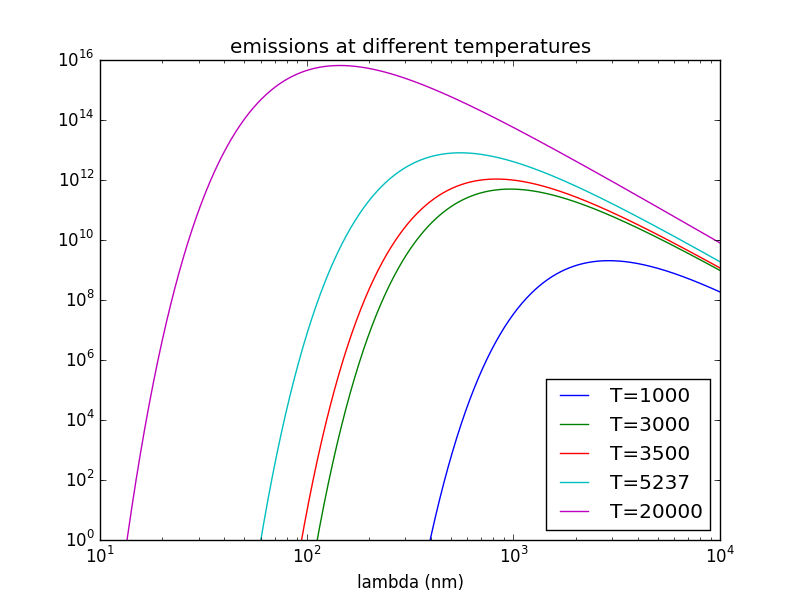 As you can see, at the higher temperatures the entire curve is shifted upwards - the intensity in the visible part of the spectrum gets higher.

Of course, with that much UV you will probably make everyone who looks at you blind in an instant, after which you would indeed be "invisible". But I don't think that is what you had in mind with your question...

Unfortunately it does not work that way. If a body is hot enough to emit in UV it will still emit in visible light, and will actually emit more EM radiation at optical wavelengths that when it was colder and the peak was in visible light. So, no invisibility here. It is due to Plank's law, a good graph can be found here.

1) It's true that the peak wavelength for a black body decreases with temperature. But let's say you want to know what temperature has what peak wavelength. Well, you can Google on "peak wavelength temperature calculator" and try for yourself. But I'll give you the short form. Since visible light is in the range of 400 to 700 nm, your body would have to be at about 8000 degrees Kelvin to have a peak in the UV. You might notice a whole lot of visible light being emitted, not to mention your surroundings bursting in to flame (it's hard to be invisible at a time like that). Just for comparison, iron melts at 1800 degrees K.

2) But let's say you could somehow reflect all light that hits you, but it is somehow transformed into ultraviolet. Would you be invisible? No, you would appear dead black. That is, you would emit no light that your eyes can detect, and that is the definition of black. Plus, of course, you would not be transparent, so you would be easy to see.

To summarize: hotter => bluer, but more radiant => brighter. Something which is very hot, but invisible, would need to be small and have an energy output proportionate to the lower surface area.

An energy source of a given number of watts is indeed easier to "hide" if it emits mainly at higher frequencies. This is what makes cobalt-60 dangerous when carelessly scrapped, although that is not at a black-body spectrum. (Also, I'm not sure which part of its radiation is worse, the gamma rays or the electrons.)

To make an object "invisible", one important thing you have to do is to stop it from blocking the light behind it from the observer's perspective.

If you have an opaque object that emits/reflects no visible light, then what you will see is a black silhouette of the object. The only way it will be invisible then is if it's against a completely black background, which means it's not preventing any light reaching the observer.

Not the answer you're looking for? Browse other questions tagged visible-light temperature radiation or ask your own question.

5
Why aren't the hottest stars mostly invisible due to radiating mostly in ultra-violet?

1
Can we create invisible things?
1
Can a beam of light be modulated close to it's frequency?
2
The sun glows bright white, but what color of light does it reflect?
3
Danger to Expose Eye to 10,000+ Lux of Ultraviolet Light
0
If an object emits radiation, is that object visible to us?
1
How does transition from violet visible light to invisible ultraviolet look like?
0
Do all objects we see emit light which then forms an image inside our eye?