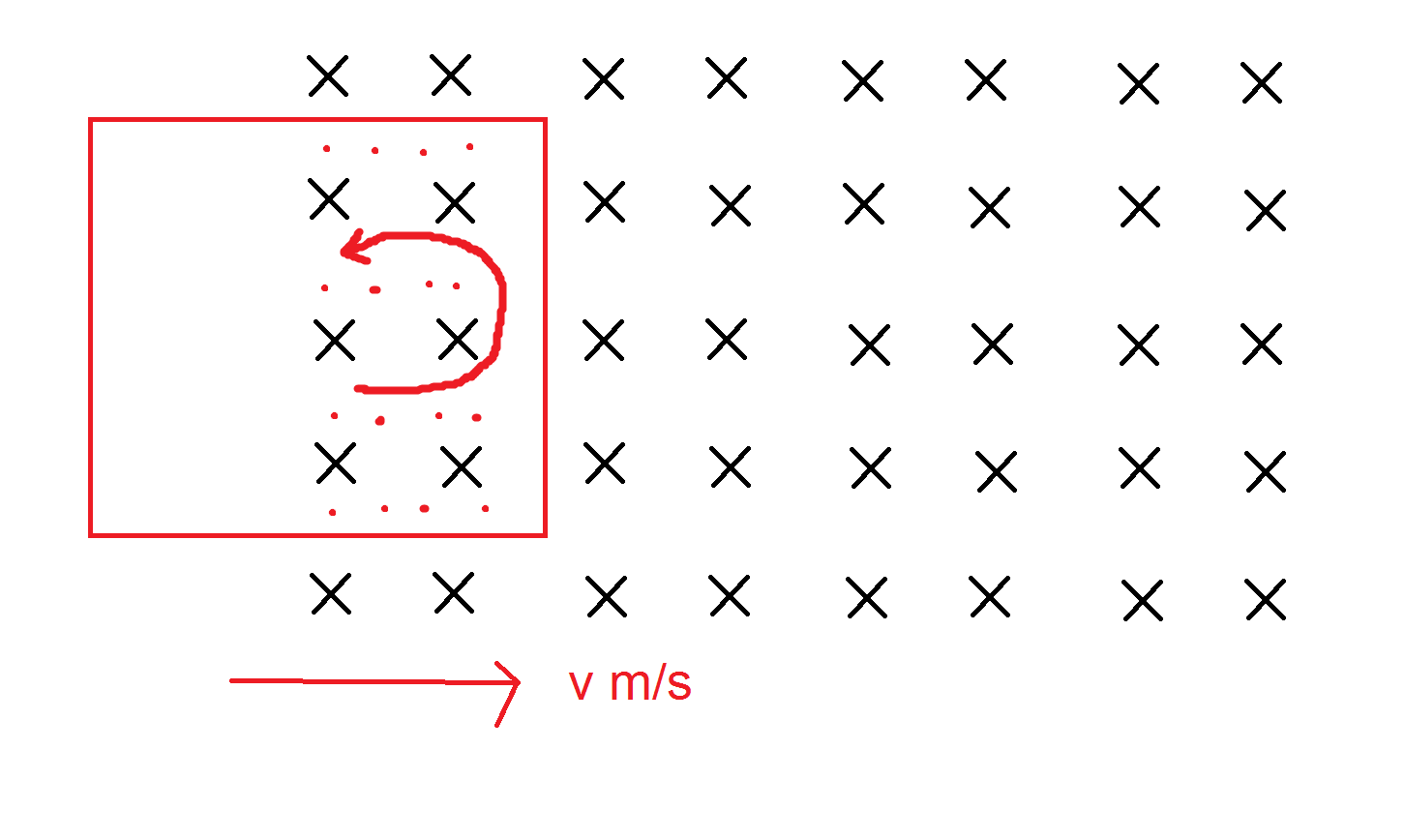 where a rectangular sheet of metal is entering a constant magnetic field at $v \dfrac{m}{s}$. Due to Faraday's law of induction + Lenz's law, we can state that an eddy current will be generated to oppose the increase of magnetic flux through the sheet of metal, so as to produce a magnetic field coming out of the page (represented by the red dots). Intuitively, I believe that this induced magnetic field should act as a 'brake' on the metal plate, as Lenz's law implies that the induced current should always in some way act against the motion, but I don't see how to calculate this 'retarding' force that would act to reduce the plate's speed?

I will use a very crude model to find the maximum restoring force, whereas the real force will be smaller. Imagine the disk to be made of rectangular loops, such that their horizontal parts are superimposed at the upper and lower edges of the plate, while their vertical parts are alined consecutive to each other and each having "width" $dx$. Then the EMF along each rectangular loop will be $Blv$, where $l$ is the vertical length of the plate, and $v$ the velocity at which the disk is moving into the magnetic field. The current is then $I = Blv/R = Bvt\sigma dx$, where $t$ is the thickness of the plate and $\sigma$ is the conductivity of the material. The restoring force due to each loop is thus $dF = lB^2 vt\sigma dx$, which implies that the maximum force is

I think that the most intuitive way of getting a grasp of the phenomenon is by means of energetic considerations. The induced current is due to the relative motion and it dissipates energy to a rate of $RI^2$, where $R$ is the resistivity of the material and $I$ is the induced current. Hence the moving object is losing energy at this rate and when it comes to a stop there will be no more eddy currents.

Part of the issue you're forgetting is the dynamics of the situation. The surface fields are not perpendicular because of the movement and the physical delay in setting up the induced eddy current to produce a counter field. If the velocity is very low or static then the forces cancel, which is why eddy breaking doesn't work well at low speeds.

With regards to calculating the breaking force, this is very complicated. The force that you get from magnets moving near copper or aluminum structures depends on many factors, including:

Most measurements are done empirically but estimations of the force can be done with three-dimensional FEA (Finite Element Analysis).

I had a fundamental misunderstanding of eddy currents. I believed that eddy currents were formed simply in the part of the metal that was already submerged in the magnetic field, but in reality it is actually something like 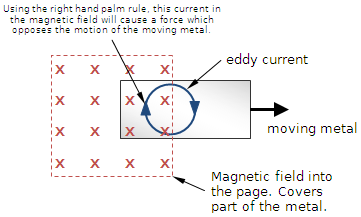 this, where only half the eddy current is actually in the field. If this is the case, then you can just use $F = qv*B = IL*B$, probably with some integration, and you can find the force. So the retarding force is just a variation on the lorentz force.

1
Eddy current - What determines the intensity of eddy current braking?

0
How does a force on electrons produce a force on a metal plate
2
Faraday's law and “infinite induction”
0
How does back-EMF oppose the input-current?
2
Electromagnetic braking hypothetical situation?
6
How to find the direction of an eddy current?
0
Eddy Currents and Lenz's law
1
Magnetic field inside conductor and linearity of eddy currents
2
Influence of Lorentz force on Eddy Current