Magnetic field inside conductor and linearity of eddy currents

Eddy currents are currents that are generated in a conductor to produce magnetic fields that oppose the magnetic field originally produced by current flowing in the conductor. The figure below (from Wikipedia's skin effect article) depicts this nicely: 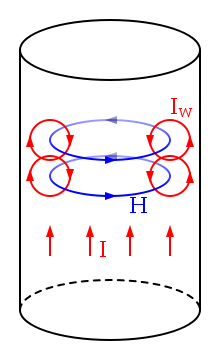 Current $I$ flows up through a wire, producing a counterclockwise magnetic field $H$ into and out of the page. By Lenz's law, to oppose this change in flux, an eddy current $I_W$ is created that flows in concentric circles centered along $H$ which produces a magnetic field that opposes $H$. This is known as the skin effect.

Yes, you are right. The skin effect will vanish for DC very quickly since there is no changing current (except from turning on or off) and hence no changing magnetic field.

Not the answer you're looking for? Browse other questions tagged electromagnetism magnetic-fields electric-current induction or ask your own question.