I chose true for this one, as I figured that if our force has to oppose friction, then it must be greater than that force without friction. However the correct answer is false.

I chose true for this one too. If acceleration is constant, then velocity is linear. This turned out to be false as well.

Can anyone explain to me why I was wrong for both of these?

Mark I liked his approach very much, by he stating his reasoning I had enough information to figure out where the flaws on his rationale were. Which for he to do it by himself would be much more difficult. The things I did not like in his question were, the vague title question, and that two question were asked in a single thread. fprime, to set an example, would split te two questions and reformulate it. I will put the proper answer after.

The second question you could have asked more directly.

Then put your answer and rationale below.

Now lets go for the answers. 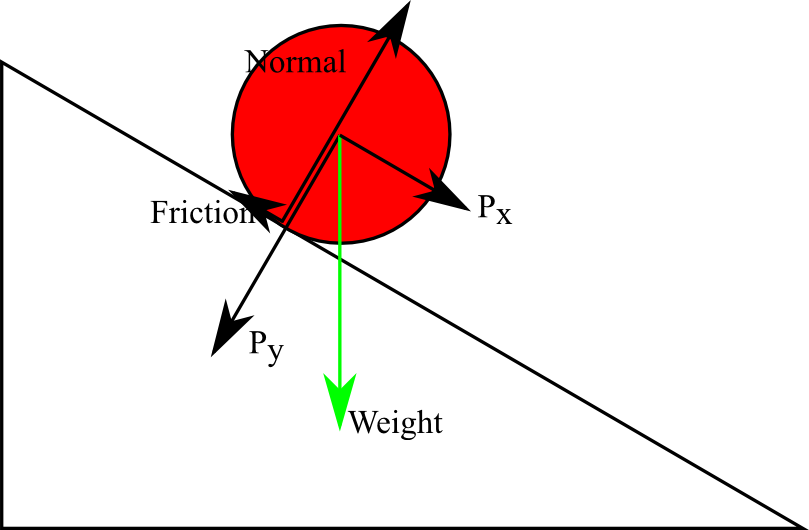 We actually use the wrong definition all around in our daily life. When we say do not accelerate while turning in a curve. We mean do not step the gas. But by the formal definition, it is impossible to turn without accelerating. So when we hear this phrase we know the person is not using the formal acceleration concept.

From an energy perspective you can suspect that with friction some of the work done goes towards rotating the ball and thus will be less left to move it linearly.

The math also supports this argument if you work out all the forces/moments, as well required rotational motion for each scenario.

I'll just give you (very obvious) hints because I don't want to solve the problem completely for you (it's better to solve it on your own).

Hint for 1: just think what kind of forces are there in both cases.

Hint for 2: think about all the possible values the constant might have.

Hint for 2 for a different solution: think in more dimensions.

Not the answer you're looking for? Browse other questions tagged homework-and-exercises acceleration velocity or ask your own question.

0
Conservation of Energy with Rotation Caused by Friction
8
Why do sticky (like rubber) items slide slowly down a ramp?
0
Average Velocity Question (isolation?)
0
Acceleration due to a force applied outside the center of mass
1
Confusion about acceleration in rotating without slipping