What happens when a force is not applied on the centre of the mass? [duplicate]

The answer to this question

force applied not on the center of mass 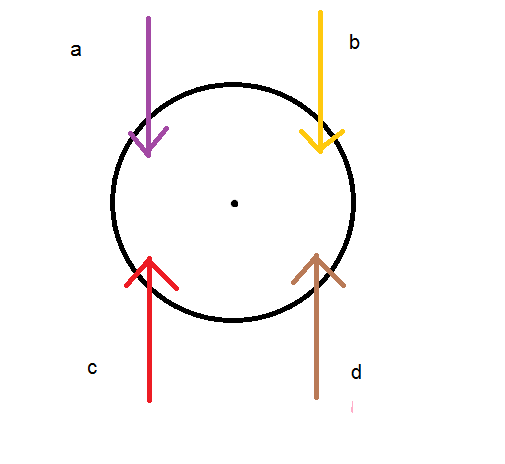 A disc with center of mass on the dot. Firstly, does that mean that force a will result in purely downward motion, as if a could be translated towards the center of mass (of course with some torque as well), or will it be at an angle (if so, what angle?). Secondly, does force a balance with force c (no net linear force) or does force a balance with force d (for linear) or do both pairs balance? I'm supposing that a and c will generate no torque and a and d will, but I am only really interested in linear motion for now.

Force a alone will produce both downward motion (as if the force were applied at the center of mass) and rotational motion, because it causes torque. But the linear acceleration is the same, regardeless of where you apply the force. For traslation, both c and d balance a, so the disk will not translate in either case, but it will rotate with d because there will be net torque.

1
Does mass concentration affect the torque induced by a force?
4
force applied not on the center of mass
0
What happens with an originial force if a part of it creates a torque?
0
Centre of Mass - Mechanics
0
Why does the force of a torque applied on a cylinder of mass $m$ at an arbitrary point equal to $F=ma$ circumference?
0
Acceleration of The Centre of Mass of A Rod
0
Is a force on the edge of a disk also a torque if the disk is not constrained?