Is there a state beyond gas?

If you could boil water in a sealed container until it became vapor and you still kept applying heat to it would something happen? Maybe gas to super-gas? This has been on my mind for a long time I really hope someone can help out.

Plasma is described as the 4th state of matter, which is what you get if you give so much heat energy that the molecules begin to break up and ionize into positively and negatively charged fragments. 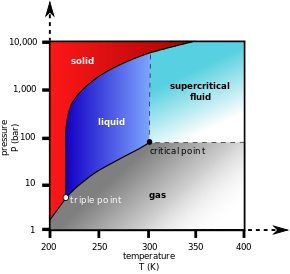 As can be see from the diagram the supercritical state exists above the critical temperature and pressure.

Supercritical fluids have many interesting properties. For example supercritical water dissolves organic molecules (such as organic solvents), which would not normally dissolve in water. It is also very acid and very alkaline at the same time because there is a high concentration in the liquid of both H$^+$ and OH$^-$ ions.

Finally to go back to your question, if you took water and heated it in a sealed container it would 'go supercritical' if it did not break the container first - please don't do this at home, because if the container breaks then you would have alot of very hot dangerous steam --- people who research this for science tend to work with very small volumes for safety.

It would start to ionize and them you would get plasma, the 4th state of matter. The "gas" would begin to become an electrical conductor

Gas is indeed not the highest state of matter, the next step in from it is in-fact plasma: a super-heated gas which acts as a liquid even though it has gone far beyond and vastly different from that form.

Super-heating that water to the state of plasma would take a fair bit more heat than a kettle or stovetop could ever produce, but if persistent pressure and energy were applied to it, eventually it would change to this fourth, higher, state of matter.

This material is found naturally in and around our galaxy but also on Earth, plasma forming directly below where particularly large lightning bolts have struck; the ground, or whatever upon which the bolt impacted, heating so fast and violently because of the extreme electrical voltage it goes through all stages of matter [solid, liquid and gas] before turning momentarily into this "super gas" as you think it as being...

One more state - the most extreme plasma that only existed microseconds after the Big Bang or in high energy accelerators like CERN - the quark gluon plasma. That's where temperature is so high the constituent quarks found in nucleons become fluid and flow freely through the mass.

There are in fact two more beyond gas.

1) Plasma: the temperature is sufficient to ionize the atoms.

1
What is the nature of equilibrium between water and air in a sealed container that is heated above 100C?

2
To which state of matter does the flame belong to?
27
Freeze water in red-hot container
0
Is there a generalized steady state state equation(s) that considers all states of matter?
2
Matter state between liquid and gas
3
New electronic state of matter
2
Why are there clear-cut states of matter instead of a gradual transition from gas to solid?
10
How does removing air from a vessel of water create bubbles?