How fast until you feel wind in space? [duplicate]

I couldn't find this question asked anywhere else, so I thought I would ask it here: does anyone know how fast you would have to be traveling in space to feel 'wind' from the particles in front of you? Say a piece of thin, 0.05 N piece of paper traveling in perpendicular to it's width and length. How fast would it need to travel before it would experience, say, 1 N of force?

That's rather an unusual question though interesting, but it amuses me to make an even more unusual answer.

Disclaimer: this is in no way a rigorous answer, as many assumptions, simplifications have been made (even entire phenomenons such as gravity attraction if the velocity is not perpendicular, solar pressure from photons...) - only a reflection on drag alone. But I think you figured it out since it's Superman we are talking about here.

If you were actually flying like Superman, how strongly would you be affected by drag? 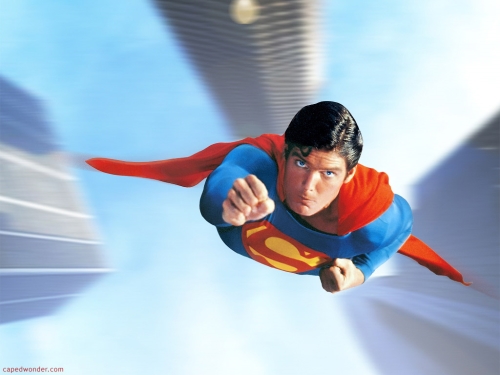 We'll see not only

As innisfree said in the comments, the usual formula to quickly get estimates is the drag equation: $$F_D=0.5 \rho v^2C_DA$$ Let's fill in the gaps, what do we have, what do we want?

Loading the above picture in an image editor, Superman's head diameter is ~200px; a lasso select yields a cross sectional area perpendicular to the velocity of ~124900px². Assuming Superman has a head 1.5 times bigger than the average male (just because), this is 725px/m, which means the area is really 0.238m².

This is an experimental parameter linked to the airflow around the geometry, but we'll take it as 0.82 for that of the side of a cylinder.

When calculating Superman's top speed, we'll assume he can develop the equivalent of the thrust of a medium airplane such as the Airbus A321, or 114kN (after all, he's been seen struggling to stop a plane). No comments on how he's supposed to achieve thrust. Top speed will be reached when drag and thrust oppose eachother.

First, let's answer your question. Rearranging the formula to find the speed at which 1N of drag is developed: $$v=\sqrt{\frac{2F_D}{\rho C_DA}}$$ We find that you need to fly at:

Still considering the maximum thrust of 114kN, the same equation tells us that Superman can go as fast as:

1.8 million km/h at 100km of altitude (maybe that's why he does not age that much - starting from here numbers become irrelevant as Newtonian mechanics is no longer valid as we get closer to the speed of light)

Not the answer you're looking for? Browse other questions tagged forces space vacuum or ask your own question.

19
Would a fast interstellar spaceship benefit from an aerodynamic shape?
16
How vacuous is intergalactic space?

4
How hot would space feel?
2
Lorentz force in superposition of two magnetic fields
2
Collision force between equal masses but at different velocities
0
How is shear stress different from normal stress?