Is magnetic levitation a good way to vibrationally isolate a speaker from its support?

I recently heard about this company planning to sell a magnetically levitating bluetooth speaker. I understand that the levitation is partly motivated by visual aesthetics, but on the website the company makes this claim:

My first thought was that surely some vibrations must be transmitted via the magnetic coupling between the speaker and the base unit. Maybe the speaker is not held very stiffly in its position by the magnetic field, but this "damping" could have been achieved by mechanical vibration isolators as well.

So, what I'm wondering is:

This is not a question about this particular speaker, but rather about the physical principle that the company seem to claim to benefit from.

It is bunk, mostly. A magnetically levitating speaker maintains a certain (hovering) position because of a gradient in the magnetic field; ergo, when the speaker moves up or down, the force changes - that's how you get a stable equilibrium. In other words - if the speaker vibrates (in reaction to the motion of the coil/membrane), it will transmit a force to the support structure. Now the change of force with position may be small (a shallow "potential well"), so that the motion of the speaker will not result in a lot of vibration coupling into the shelf. In that sense, it's not unlike putting the speaker on a pad of foam - in either case, there is an acoustic impedance mismatch between the speaker and the support, and this reflects most of the sound energy back.

This leaves the speaker designer with having to deal with the case of the speaker as a "second sound source", but the motion is typically small (mass of case is much larger than mass of coil + membrane) so the effect (on the sound pattern) is small. By contrast, if you couple the motion of the speaker case into (say) a large shelf, then the "sound board" you create is quite large, and now you lose control over how the sound is emitted / propagates to the listener. You will get distortions, and certain frequencies will be amplified more than others.

So yes - controlling the coupling of speaker vibrations is a good think. But no - there is nothing unique (other than esthetics and marketing buzz) in a magnetically levitating speaker that makes the sound "better" than other forms of isolation.

Having said that - it does look very cool: 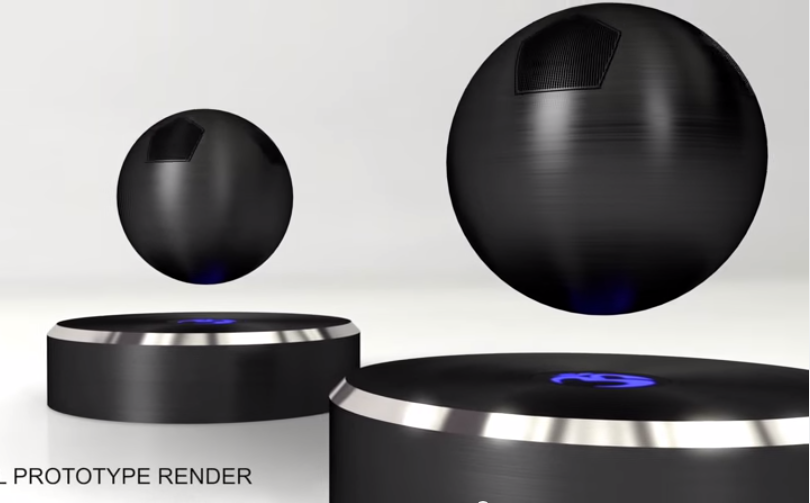 I found an online marketing movie for this speaker - the designers clearly state that the speaker works just fine when it's not levitating.

This advertising strategy is basically using pseudoscience to get naive people to buy a product. The efficiency problem in speaker design has nothing to do with momentum transfer from the speaker to the air. That's trivial, since the mass of air a speaker moves is typically orders of magnitude less than the mass of the speaker itself. Instead, the (low frequency) limit is given by an acoustic short between the back of the moving membrane and the front of it. Basically, the two waves emitted by the membrane are interfering destructively, if the wavelength is longer than the size of the membrane. The potential solutions to this problem are

a) Make the membrane larger than the wavelength of the lowest sound that has to be reproduced. This is hardly practical.

b) Absorb the wave emitted from the back of the membrane completely, which eliminates the interference. This comes at a significant loss of power.

c) Introduce a 180 degree phase shift between the front of the membrane and the back. This way the destructive interference turns into a constructive one.

In practice, most efficient speaker designs use a combination of all three. There are a large number of other problems in speaker design, but none of them are solved by levitating the speaker.

Two things: First of all, Newton's laws of motion still hold, so all the energy applied to the voice coil is going to move something. Since $ m_1 v_1 + m_2 v_2 = 0 $ (momentum conservation),and a speaker bolted to a wall has a seriously large mass, it's more likely that it'll send a higher proportion of its energy into the air than a "free-floating" speaker. And yes, the speaker case's reactive motion certainly couples through the magnetic field to apply force to the base.

Now, onto vibration damping: Since the "resting height" of the speaker remains constant, certainly any motion of the base gets transmitted to the speaker. This suggests that what matters is the effective damping curve of the magnetic field, which may well serve to reduce audio-frequency-range vibrations from reaching the speaker.

Not the answer you're looking for? Browse other questions tagged electromagnetism magnetic-fields acoustics levitation or ask your own question.