I have read that the pressure in a water barometer at the top of the water column is around 0.5 psi and at such low pressures water should boil at around ~26°C (Room temperature). [1] [2] 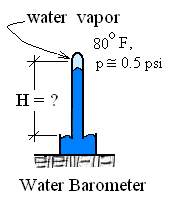 How come the water in the column near the surface doesn't boil?

The pressure above the water column is indeed very low, and water molecules at the surface may escape - but they are also held back by the surface tension of the water (is your meniscus concave or convex?). There is an equilibrium here, and the temperature is low enough that the water won't boil off all at once. So at room temperature a water barometer can work "reasonably well" - for a while. Eventually the void fills with water vapor, and the water column will drop (as the pressure in the void rises). Eventually you get an equilibrium where the water vapor above the column reaches saturation for the given temperature.

The residual pressure of 0.5 psi is just about what you expect: it's the saturation point for water at 26 C, so the point where water vapor re-enters the liquid as fast as it escapes.

I conclude that you need to know the room temperature to make the appropriate correction to the pressure reading from the barometer - both for the density of the water, and more importantly to compensate for the vapor pressure in the void.

Not the answer you're looking for?Browse other questions tagged thermodynamics water pressure temperature or ask your own question.

1
Boiling water at low pressure with heat supply
2
How long does it take for water to boil when subjected to intense heat?
1
Does atmosphere pressure affect the reading of a submerged barometer?
1
Does water boil when going through a tap (valve)?
1
Why is water inside a vacuum chamber not boiling?
1
How quickly does water lose heat by thermal radiation?