What does the Higgs boson have to do with the uncertainty principle and quantum oscillations?

I was looking in New Scientist the other day when I saw something to do with the Higgs boson, energy levels, entropy, space/time, quantum oscillations and many other things. It was in a feature to do with symmetry. I have read up about this and I know that the magazine does not accept original works, so I guess that this is mainstream physics. 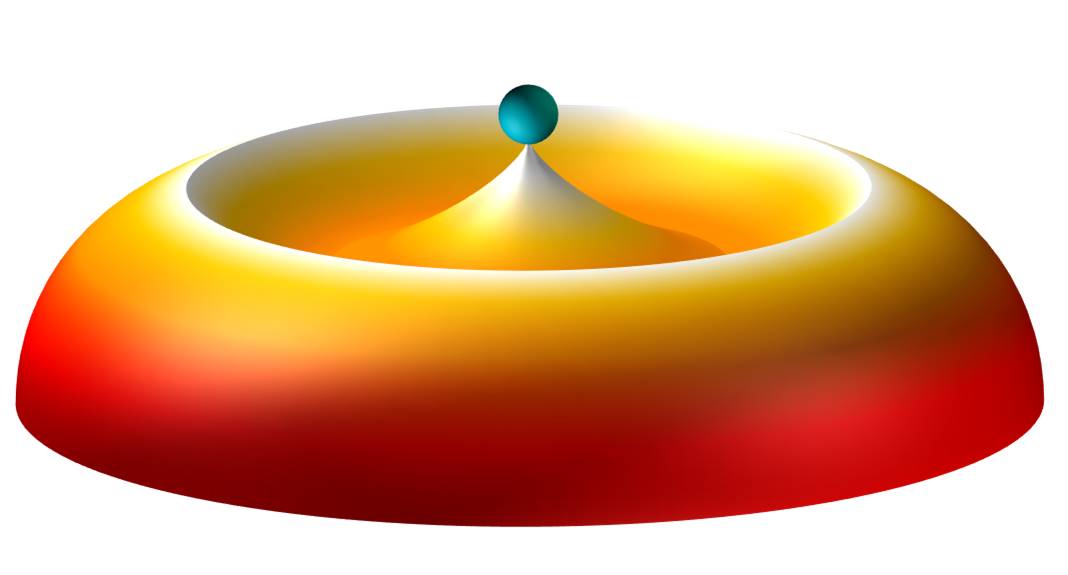 The above is a diagram of what I'm talking about. This is how it appears in the magazine:

According to NS, a ball (like the blue one above) that is sitting at the top of a piece of space/time warped like this has an unstable energy level and position. Given the slightest nudge, it will "fall" into a lower energy state and quantum oscillations (which occur as is "rolls" up and down the "pit") caused by the uncertainty principle create Higgs bosons in the Higgs field.

I have pondered this repetitively, and it still looks like nonsense (even in the eyes of quantum physics). What I want to know is: has this been regarded as true or is this "complete nonsense"? And if so, how can the uncertainty principle cause such things to happen?

What I do not understand is how a vacuum generates Higgs particles if it has no mass - unless it's trading it with energy.

What is actually happening (the magazine hasn't described it in enough detail for me to understand)?

The "Mexican Hat Potential" (although now more politically correctly called the "Champagne Bottle Potential" after the punt at the base) is the potential energy curve for the vacuum expectation value (VEV) of the Higgs field. Think of the blue dot as being "the vacuum", and the radial direction as turning up the strength of a background field that permeates all of space uniformly. When the radius is zero (at the top of the hill), there is no background field, but the vacuum is not in its ground state (lowest energy). Therefore it is unstable and quantum fluctuations will cause it to jiggle a bit in one direction and roll to the bottom, so that the Higgs field acquires a VEV. This is called the decay of the vacuum, and happened a very long time ago (it's possible that we're still in a metastable state, and the vacuum could decay to the true ground state). At the minimum, the whole universe is filled with a uniform background Higgs field of "strength" 246 GeV. Note that these are NOT Higgs particles, just a background field that all other particles must move through. The interaction coupling with the Higgs field is what gives particles mass; just like a bullet through jelly being slowed down, a massive top quark interacts strongly with the field and is "slowed down" (made more massive).

As always, quantum fluctuations (embodied by the uncertainty principle) will continue to jiggle the vacuum state back and forth along a radial line, and these oscillations give rise to Higgs particles (the "steepness" of the curve is what gives the Higgs its particular mass, 126 GeV). Notice that there can also be rolling along the circle at the bottom for "free" (it costs no energy). These motions are associated with the massless Goldstone bosons that are "eaten" by the weak vector bosons to give them a mass (the massiveness of the $W^{\pm}$ and $Z$ bosons is why many nuclear decays take a while, and one reason why nuclear forces have such short range).