Would two Neodymium magnets stick together with twice the power?

Probably not, but it depends on the geometry of your coil.

For a couple of dollars at the hardware store you can get a big stack of those coin magnets. If the answer to your question were yes in general, it'd be harder to break apart the big stack of magnets that to separate two of them. That's not consistent with my experience.

In general for a dipole $\vec m$ in a field $\vec B$, the force is $\vec F=-\nabla(\vec m \cdot \vec B)$. If the dipole moment is a constant, and the dipoles are free to rotate, they will orient themselves so that $\vec m$ is antiparallel to $\vec B$. In that special case, the force simplifies to $$\vec F \approx m \vec\nabla B. $$ In other words, the dipoles "want" to align antiparallel to the field, then to move up the gradient into the strongest part of the field. A dipole in a uniform field feels a torque, but not a net force.

If your coil is set up to generate a uniform field, your two stacked magnets will feel the same force — but that force will be zero. If your coil is generating a magnetic field with some dipole component, your stacked magnets will rotate to align with the field, then (since we've already assumed there is a field strength gradient) one of them will see a weaker gradient than the other. The gradient $\vec\nabla B$ typically vary like $1/r^4$, where $r$ is the distance from the center of the coil, so the force on the two coin magnets can vary considerably over a short distance. This is why strong magnets like to suddenly "leap" together and pinch your fingers when you are playing with them.

I actually happened to have some magnets with this shape on my desk. In response to Carl's comment, I built a little string lifting harness to measure the force on a single magnetized paper clip: 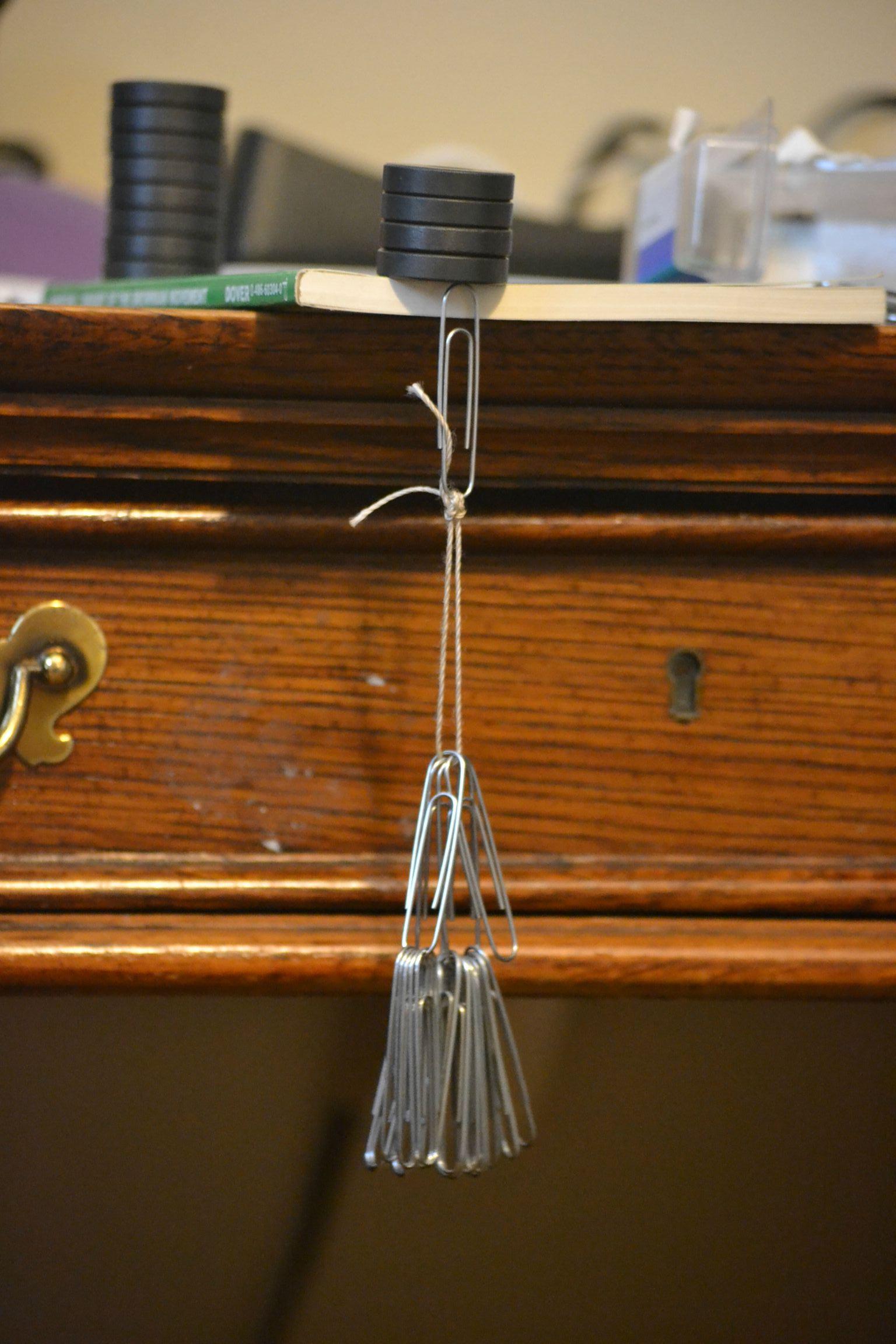 Adding a second magnet increased, but didn't double, the weight that the harness could hold:

The dominant effect in calculating the force is the field is right at the surface of the stack of magnets; it looks like that gets saturated, an effect I didn't consider in the first part of my answer.

1
If magnets exert greater force on heavier objects, why is it possible to separate magnets from very heavy objects?

9
Can I replace neodymium magnets with similar-size electromagnets?
12
How do permanent magnets manage to focus field on one side?
5
Do two magnets stacked on top of each other repel/attract stronger than just one magnet?
1
How can a magnet have a greater magnetic field strength than a bigger, heavier and more powerful magnet made of the exact same material?
4
Why my simple electromagnetic experiment does not work?
4
How strong is Earth's magnetic field in space?
0
What is the formula for the pull force of a cylindrical magnet
1
What would the magnetic field of two (practically identical) static cylindrical permanent magnets stuck together (called compound magnets) look like?
5
Why do two like poles stick together when one magnet is stronger than the other?