Do we need inertial frames in Lagrangian mechanics?

Do Euler-Lagrange equations hold only for inertial systems? If yes, where is the point in the variational derivation from Hamilton's principle where we made that restriction?

My question arose because I was thinking how could you describe the motion of pendulum with an oscillating suspension point, something like this: 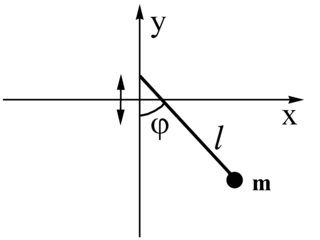 If you take your coordinate frame fixed in the suspension point, you would get the motion of a simple pendulum, which is false (because it's a non-inertial frame and you should have virtual forces).

But if it were moving at constant speed, a moving coordinate frame should give the same equations of motion.

And I'm not sure if the situation would be similar to Kepler's problem in polar coordinates.

The use of inertial frames in Lagrangian mechanics is by no means compulsory and everything can be done in any reference frame provided one takes all forces, real and inertial, into account.

Actually there are two possibilities in interpreting the question.

These are two completely independent viewpoints whose interplay I go to illustrate. Everything relies upon the following general result. I will refer now to a generic pair of reference frames $R$ and $R'$ without assuming that one of both are inertial.

The said result has two remarkable consequences: (i) The Lagragian of a given system is not uniquely given, (ii) as soon as we make a choice of a Lagrangian of a system we can suppose that it transform as scalar without affecting the equations of motion, written in whatever reference frame.

The mentioned result implies something for the special case where $R$ is inertial and $R'$ is not. Let us start constructing $L|_R$ in $R$. For the sake of simplicity we stick to the form: $$L|_R(t,q, \dot{q}) = T|_R(q,\dot{q}) - U|_R(q)\quad (1)$$ i.e. all forces are supposed to be conservative in $R$. The more general case of real forces due to a generalized potential (see below), like electromagnetic forces, does not involve any further difficulty.

In $R'$ the real forces associated with $U$ keep existing, but new inertial forces show up described by some added term $-V$ below, so the Lagrangian must be of the form:

It is easy to see, by direct inspection form (3), that:

It depends on how you "derive" Lagrange's equations, whether taking Newton's laws as fundamental or by assuming an action integral and minimizing it. However, there is no such requirement that you be in an inertial frame of reference.

I) In e.g. Ref. 1 is shown that there exist (possibly velocity-dependent) generalized potentials for all the fictitious forces, such as, e.g., the centrifugal force, the Coriolis force and the Euler force. So Yes, there exist Lagrangian formulations for non-inertial accelerated reference frames.

Not the answer you're looking for? Browse other questions tagged classical-mechanics lagrangian-formalism reference-frames inertial-frames or ask your own question.