How much light can pass through a point?

The other answers have addressed rather well what happens in a vacuum. However, the situation is rather different in a medium, and there are indeed certain fundamental constraints which mean you absolutely shouldn't go above a certain intensity in material media.

The name of the game is Kerr lensing. The Kerr effect is the most basic of nonlinear optical phenomena in isotropic media, and it essentially says that if the light intensity is large enough, it will start affecting the index of refraction: at intensity $I$ the index of refraction can be approximated well as $$n=n_0+n_2I,$$ where typically $n_2>0$. This sounds innocent enough, but it can actually be catastrophic. The reason is that light beams tend to be more intense in the centre, which means that the nonlinearity will make the medium optically thicker there. That is, the light encounters a medium with an optically thick region surrounded by optically thinner regions, and this is precisely what a convex lens looks like. Therefore, the light will focus a little bit.

You can now see the problem: since the light gets focused a bit tighter, the intensity at the centre gets stronger, the medium becomes thicker, and you get even more focusing. Past a certain threshold, you get a positive feedback loop in which the beam self-focuses into a spot that's tiny and where the intensity is large enough that it can and will cross the damage threshold of the medium.

This is bad enough that running your laser at an intensity high enough for self-focusing to matter is a recipe for ruining your laser, and you'll typically get a string of damage as the beam de-focuses at damaged spots and re-focuses down the line. This kind of damage was for a long time the limiting factor in obtaining high peak power lasers, 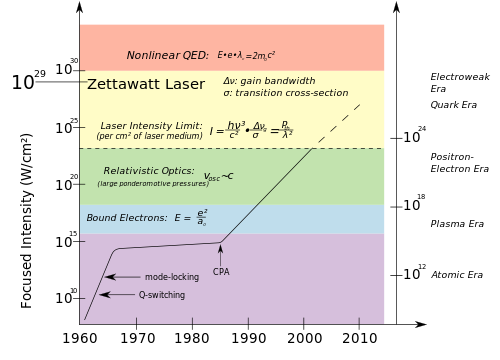 until the advent of Chirped Pulse Amplification, which allows you to stretch your pulse out in time, amplify it at a safe intensity, and compress it back to a short duration. And of course, after you've compressed it back then any transmissive optics need to be very carefully designed to avoid ruining the whole beamline.

Of course, if you simply want to focus as much light as you can on a single spot, you can focus multiple beams on an empty spot. However, if you do this in a gas, you run the risk of falling afoul of a small but nonzero $n_2$, and there you need to be careful.

There is a limit, though I'm not sure exactly where that limit will be.

We know there must be a limit because if you concentrate enough energy into a small volume you get a black hole. However this limit is far, far above anything we can achieve at (for example) the NIF.

Photons are bosons so there is no limit to the number that can pack into the same volume. In principle this allows you to focus any amount of light below the black hole limit. Classically light does not interact with itself, but quantum mechanics allows photons to interact by creating virtual electron-positron pairs. This will presumably create some problems trying to pack photons into the same volume, though I don't know what the limits would be.

There have been several questions related to this, of which Scattering of light by light: experimental status seems the most useful. Several other questions about photon-photon interactions have gone unanswered.

Photons are massless so there's nothing stopping any amount of them from being in the same place at the same time. The only thing that I can think of that might be interesting is that, depending upon the wavelength(s) of the laser(s) and each beam's phase in space, you could have either destructive or constructive interference.

Beams of light have a spatial extent and that will be macroscopic enough for the statement that the intersection at a point , define it as the intersection of the central ray of each beam, will have a ball around it of classical dimensions, let us say microns cubed. In this space one would expect first classical interferences, and as the intensity increases quantum effects from second order Feynman diagrams which may destroy the interference patterns by changes in the involved photon's direction. If the frequency is high enough, larger than the mass of the electron ( 0.5 Mev energy gammas) then pair production will start from higher order diagrams (and the ball will expand ) . The link goes into detail on how to make a gamma gamma collider.

If one goes to smaller volumes then the nanometers cubed of the proposed beam one would start hitting on the Heisenberg Uncertainty Principle, i.e. if one knows the accuracy of the frequency very well , the intersection will become fuzzy, which will put a limit on the diminution of volume in which one could increase the intensity of the beam, and in that sense there is a limit quantum mechanically that does not exist for classical optic rays.

The important point in your question is the point.

According to Huygens principle, each point of the wavefront is the source of a secondary disturbance and the wavelets emanating from these points spread out in all directions with the speed of wave.

According to de-Broglie, radiation exhibits dual nature, each corpuscle (photon) is accompained with a wave.

7
Do all light rays from a point passing through a thin lens converge at the image?
0
New focal point of converging light through a concave lens
1
Can Incoherent Polarization Beam Combining be Used to Produce Polarized Light?
1
Can light be rotated using lenses or prisms?
5
How is light able to pass through more than one polarizer
0
Would an incoherrent point source of light have any effect on a coherent
4
How Small a Slit can Light Pass through?