Does a muon detector on Earth's surface correctly measure the mean lifetime of a muon?

Just a simple question. Does a muon detector on Earth's surface correctly measure the mean lifetime of a muon? I would think the answer is no because most muons detected are created about 15 km above Earth's surface, so on average they will have survived for some amount of time calculated using special relativity before reaching the detector.

The detector I'm talking about is a scintillator, so it detects when the muon enters the detector with a flash, then if the muon decays it detects another flash. The time between flashes is said to be the muon's lifetime.

Is this muon's lifetime the machine giving me the actual lifetime (2.2$\mu s$), or just the lifetime of it on Earth's surface? 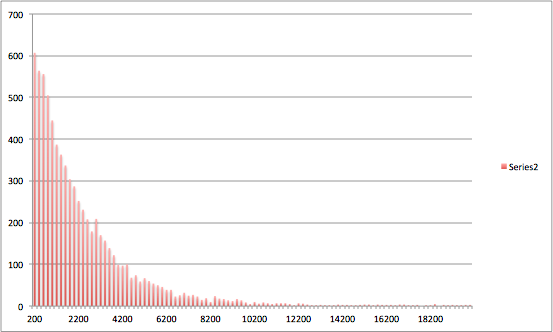 Your worry is not necessary.

In the usual experiment the detector measures the distribution of the time between the muon stopping in the detector and the time of it's decay. Then an exponential curve is fit to the data and the lifetime taken from the fit parameters

Muon decay is a processes analogous to radioactive decay, and (like all exponential processes) it has the special property that the lifetime from the fit does not depend on the absolute start time.

An important thing here is what the "lifetime" means. And what it doesn't mean.

It does not mean that muons tend to decay $2.2 \,\mathrm{\mu s}$ after they are created (which would imply that you are looking for a peak and that the absolute start time matters).

"The difference between theory and practice is that, in theory, there's no difference, but in practice, there is."

At Colorado State University over the past several years, students using the Teachspin muon lifetime apparatus have been consistently getting muon lifetimes that are slightly but significantly too short. In late 2012 I spent several months collecting my own data, and re-analyzing the student data from spring 2012. My results are explained in http://www.riverrock.org/~howard/Teachspin_error.pdf (Ignore the (relatively small amount of) material about QTD and Van de Graaff generators; they are irrelevant for your purposes.) There are many possible sources of experimental error, some of which I detail in section 4. I also explain how to correctly analyze a truncated exponential (or geometric) distribution, and give source code for all my analysis software.

Section 3.6 explains that "a property unique to the exponential and geometric distributions is that they are memoryless; the probability of an event occurring does not depend on how long we have already waited for it to occur. Another way of saying this is that they have a constant failure rate. Because muon decay (like nuclear decay) follows an exponential decay pattern, we do not need to be concerned with the history of the muon before it arrives in our apparatus. Indeed, the entire experiment would not be possible without this property, since we do not measure the entire lifetime of the muon from its creation in a pion decay while still traveling at nearly lightspeed, but only its lifetime after coming to rest in our detector." These distributions are also the maximum-Shannon-entropy distributions given only the constraint of having a particular mean lifetime, which means that assuming any other distribution of decays is equivalent to claiming that you know something special about the internal decay process, that allows you to predict it better.

After the above paper, I was able to demonstrate that a part of the error was due to contamination by shorter-lived particles like pions (26 nS) and K_longs (51 nS). Since CSU is at about 1500 m altitude, a few more of these should be expected than at sea level, but the data indicates even more than that. The best guess at the moment is that the excess were "structural" pions generated by cosmic rays colliding with the steel and concrete of the physics building; these wouldn't have to travel very far. They show up as an increased number of events in the first few decay bins.

However, pion contamination is insufficient to explain the whole discrepancy. Much of the remainder is still a mystery.

Not the answer you're looking for? Browse other questions tagged special-relativity experimental-physics data-analysis particle-detectors particle-physics or ask your own question.

4
should the Z0 decay at the same rate that the neutral pion?
2
Difference in decay for muon and anti muon
2
Dilemma in race between muon and light
26
“Reality” of length contraction in SR
5
Ideas for extending Muon-Life-Time experiment?
0
Relativistic muons traveling in a circle
0
Reference frame of non-localized particles?