Do neutrinos not couple to the Higgs field?

I was reading the CernCourier, my favorite source of message on Higgs and friends. I was rather shocked, when I saw this:

"The mechanism by which neutrino mass is generated is not known."

What? Not known? Wiki says: In Higgs-based theories, the property of 'mass' is a manifestation of potential energy transferred to particles when they interact ("couple") with the Higgs field, which had contained that mass in the form of energy.

Does this mean that neutrinos don't couple to the Higgs field?

The exact mechanism of producing neutrino mass is not known. The main problem is that the neutrino masses are extremely tiny compared to all other energy scales. That means that any interaction responsible for their appearances is highly suppressed.

The massless fermions can be described by the so called chiral spinors, left or right. That correspond to the left/right helicity (the projection of the spin on the particle momentum) of the particles and the opposite helicity of the antiparticles. It's interesting that the weak interaction involves only the left spinors. When we assumed that neutrinos are massless we used only one left chiral spinor $\nu_L$ to describe each sort.

However for massive fermion you can always find a reference frame where it moves in the different direction. Therefore the helicity of the massive fermion is not invariant. This is connected with the fact that to describe the massive fermion you need to get some spinor of the opposite chirality. The most straightforward way (known as the Dirac mass) that is realized for charged leptons and quarks is to mix two different spinors with opposite chiralities. If we assume that neutrino masses are realized by the same mechanism we should introduce extra spinor $\nu_R$ and couple it to $\nu_L$ using the Higgs field with some vacuum expectation value $\langle v\rangle$. Then at the low energies we would obtain in the Lagrangian, \begin{equation} g\langle v\rangle \nu_R^\dagger\nu_L+g\nu_R^\dagger h \nu_L+\mathrm{h.c.} \end{equation} The first term correspond to the mass of the neutrino equal to $g\langle v\rangle$ and the second describes its interaction with the Higgs particle $h$ which is represented by the following Feynman diagram vertex. 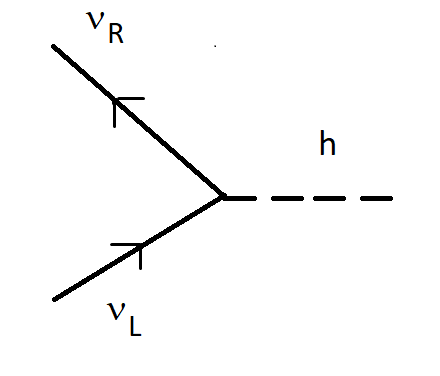 The issue is that the neutrinos are very light compared to other fermions. That means that the coupling constant $g$ for neutrinos should be extremely tiny compared to e.g. the one for the electron which seems rather strange. As $g$ determines the coupling constant for neutrino interaction with the Higgs particle that means that such processes are extremely suppressed. As the neutrinos are electrically neutral and $W^\pm$, $Z^0$ bosons interact only with $\nu_L$ the new component $\nu_R$ doesn't play any role in any other proccess. So we have to introduce practically invisible new field using some strange values of parameters.

The other way (so-called Majorana mass) uses the fact that particles and antiparticles coming from the same chiral spinor $\chi$ has opposite chiralities. So the charge conjugation $\chi^c$ of that spinor behaves as the spinor of the opposite chirality and we can use $\nu_L^c$ instead of $\nu_R$. Because of the weak interaction to make a theory self-consistent you have to couple them also to the Higgs field in the following way, \begin{equation} \frac{g}{\Lambda} (\nu_L^c)^\dagger h^2 \nu_L \end{equation} This describes the different interaction with Higgs particle represented by the following Feynman diagramm vertex, 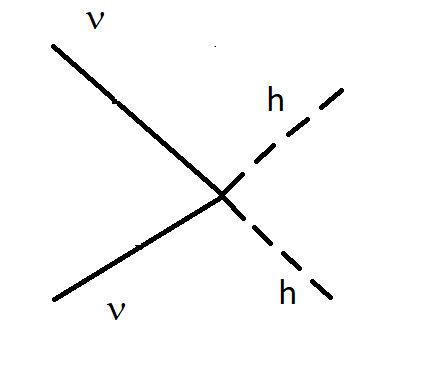 Now the coupling constant becomes dimensional characterized by some large energy scale $\Lambda$. That means that our model becomes non-renormalizable i.e. it will be broken when our energies becomes comparable with $\Lambda$. Therefore adding Majorana mass to neutrinos means that we touch some more fundamental new physics. This can however explain why those masses are so tiny - in this hypothesis they are actually a weak echo of some new physics at very high energy scale.

You can actually get this Majorana neutrino with a very simple so-called seesaw mechanism that combines usual Higgs mechanism involving new component $\nu_R$ with some very heavy Majorana mass $M_R$ for $\nu_R$ (that can be introduced in the renormalizable way as it doesn't interact with the $W^\pm$ and $Z^0$). It's interesting that if $M_R$ is comparable with the hypothesized Grand Unification scale whereas interaction with the Higgs field is almost as strong as for the electrons the resulting mass for the light neutrinos has order close to the observations. Because this mechanism is so simple and natural this is quite popular hypothesis.

Of course those are the simplest options. It may be that neutrinos don't interact with Higgs directly at all and its role is played by some unknown fields with similar properties but much higher mass. We simply don't know yet.

To reduce this to popular science terms, the chirality of a fermion changes every time it interacts with a Higgs boson. More precisely interactions with the Higgs field mix up e.g. a left handed electron and the right handed antipositron. This mixture is what we call a massive electron. There is a much more detailed, but still fairly accessible discussion of this here.

But there is no right handed neutrino, or at least we have never detected one. That means the (left handed) neutrino cannot couple to the Higgs field.

There is no agreement between physicists about neutrino mass generation mechanism.

For instance, there is no neutrino mass in Standard Model(SM), because of ambiguity of Higgs mechanism(electron and neutrino_e is SU(2) doublet, and after spontaneous symmetry breaking the first one receives the mass, $m_e$, and second one remains uncoupled.

Mechanism of neutrino mass generation is much discussed today in different theories, like minimal extention of SM, and in more complex and exotic theories.

Not the answer you're looking for? Browse other questions tagged particle-physics mass higgs neutrinos or ask your own question.

0
Why doesn't the Higgs give mass to neutrino?
1
What is the origin of neutrino mass?
1
Do neutrinos get their mass via interacting with the Higgs Boson?
6
Does the Planck Spacecraft end the question of sterile neutrinos?
0
Can neutrinos change chirality?
0
Can neutrinos derive Higgs mechanism mass by a relationship to other particles?

2
What is the difference between the Higgs Boson particle and an electron moving through the Higgs field?
0
Can neutrinos change chirality?
4
Experiments to find right handed neutrinos
5
Why is the notion of neutrinos as possiblly Majorana fermions still promoted given the observation of neutrino oscillations?
2
How do we exactly use neutrinos to probe the core of the Sun (if they can only interact weakly)?
1
Why did particle physicists believe the neutrino was massless, according to their Standard Model?