Why do speed skaters use their right hand to accelerate?

I was watching the speed skating event, and was wondering, why do the athletes use their right hand while accelerating? If they want to increase the moment of inertia, then they should move the hand away from themselves, but they don't do that.

Is it due to the shifting of the Centre of Gravity to the right (leading to an increased torque and more chances of toppling over) that they don't move their left hand at all?

If I remember correctly they only do this in the turns and they use both arms in the straights. It is the outer arm that is active. This helps them turn in two ways. It helps accelerate the outer side more than the inner which is what is what turning really is. The reaction force at the shoulder also helps them lean into the turn which helps them stay stable through the acceleration of turning. This the same reason why bicycles and motorcycles lean into turns and why race tracks for some sports are banked.

The mechanics of swinging arms in skating are similar to those in running and even walking. The main benefit is during the back/down part of the stroke. Since the arm is moving back, down & also out, there is an opposing forward, up and inward reaction force on the torso at the shoulder. The forward component helps with acceleration, upwards helps extend the stride and the inward helps with balance. Doing this only on one side helps turn to the opposite side as described above.

There are (at least) two reasons why the return part of the arm stroke does not completely undo the benefit of the first part. One reason has to with timing. The active part of the stroke occurs while the foot on that side of the body is off the ground and the other foot is planted so it is helping propel the side of the body that is up moving and there is a longer lever from the shoulder to the fulcrum at the planted foot on the far side. During the return stroke that side of the body is on the ground so it does not slide back due to returning forces. Also the leverage from the shoulder to the planted foot is shorter. When the opposite foot is off the ground the return stroke actually helps move the opposite site of the body forward. A simple experiment to demonstrate these effects is to swing just one energetically arm back and forth while standing on one foot and then on the other. Observe the different ways your body responds to swinging the same arm in while standing each foot.

The other possible reason the return strong does not undo the benefit of the initial stroke is that the arm can be in a more relaxed position during the return stroke so it has smaller moment of inertia and thus the reverse effect is lesser. Also return stroke can be less aggressive. This is similar to the way falling cats turn themselves in mid air without violating conservation of angular momentum. I am not certain how big a role this mechanism plays in skating or running though.

My explanation is only valid in cases where the skaters move as I described. According to @Pulsar below, this may not be universally true. However, arms do go out of phase with legs 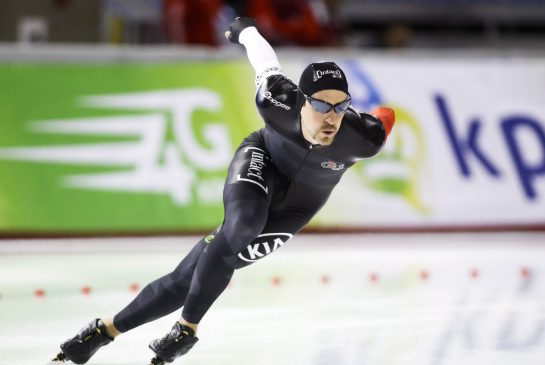 and both arm are used 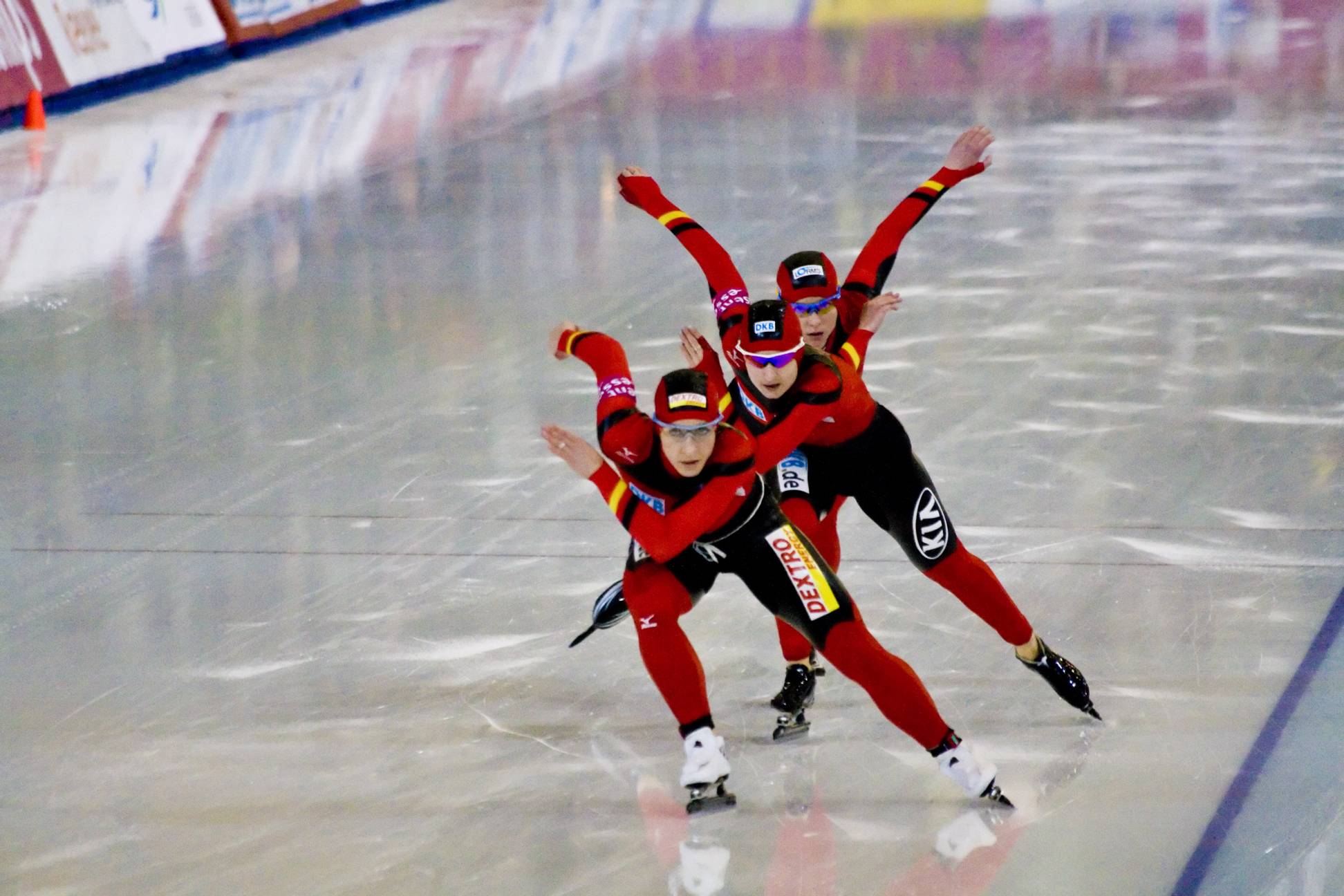 at least some of the time

This doesn't exactly answer the question, but it does suggest that the key explanatory link is the step frequency.

The use of one or both arms allows for an increase in "step" frequency. (Why? Don't know. Perhaps for the same reason that speedwalkers flap their arms. Biomechanics. The Dutch Wikipedia refers to a slight increase in "tempo" due to the use of arms.)

Immediately after the start you'll see skaters use both arms, and this is also when we see - I think - the highest step frequency, apparently required for acceleration.

During cornering fast skaters need to increase their step frequency in order not to miss the turn. This would explain the use of at least one arm in cornering. (Some will use both arms.)

Just before the finish you might see skaters trying to accelerate for a final push, also using both arms.

During the straights, skaters will use one or both arms when they feel they are going too slow and need to keep accelerating. Especially using both arms is usually commented on as being a sign of tiredness. But I think the more direct cause is that the skater knows that his/her speed exiting the corner wasn't sufficient and he/she needs to speed up.

So why do many of the top-skaters not use their arms on the straights during longer events? My "theory" might explain this as follows: it would increase their frequency beyond sustainability. Above cruising speed, too much work will go into maintaining the frequency itself as opposed to being used for forward acceleration. A lower frequency (with longer, more powerful strides) is preferred. Hence: arms on the back.

0
Boomerang angular momentum
4
Torque - Why does a block topple and net torque when net force is non-zero?
2
Why do vehicles with a higher center of mass roll more easily considering that they have a higher moment of inertia?
2
Why does force x distance not equal kinetic energy for objects rolling down an inclined plane?
1
Torque on a constantly rotating rod
0
Torques In Gears