So I was reading in Chapter 3 of my textbook, Sears & Zemanksky's University Physics with Modern Physics by Young and Freedman, 13th Edition, and the discussion took us to a definition of the acceleration vector.

(Please note that all pictures - which aren't obviously hand-drawn with with a pencil - do originate from this text.)

Not so hard to swallow.

But, one of the questions has me stumped - at least a little. Let's say we have sled sliding over perfectly flat terrain on perfectly super-slippery friction-less ice. Ignore air resistance - (the sled won't have much anyway, of course.) However, respect gravity. I know that this sled will have a 0-vector for acceleration when it is traveling along a perfectly flat surface, because there are no external forces acting on the sled other than the normal force! (3rd sled From right) 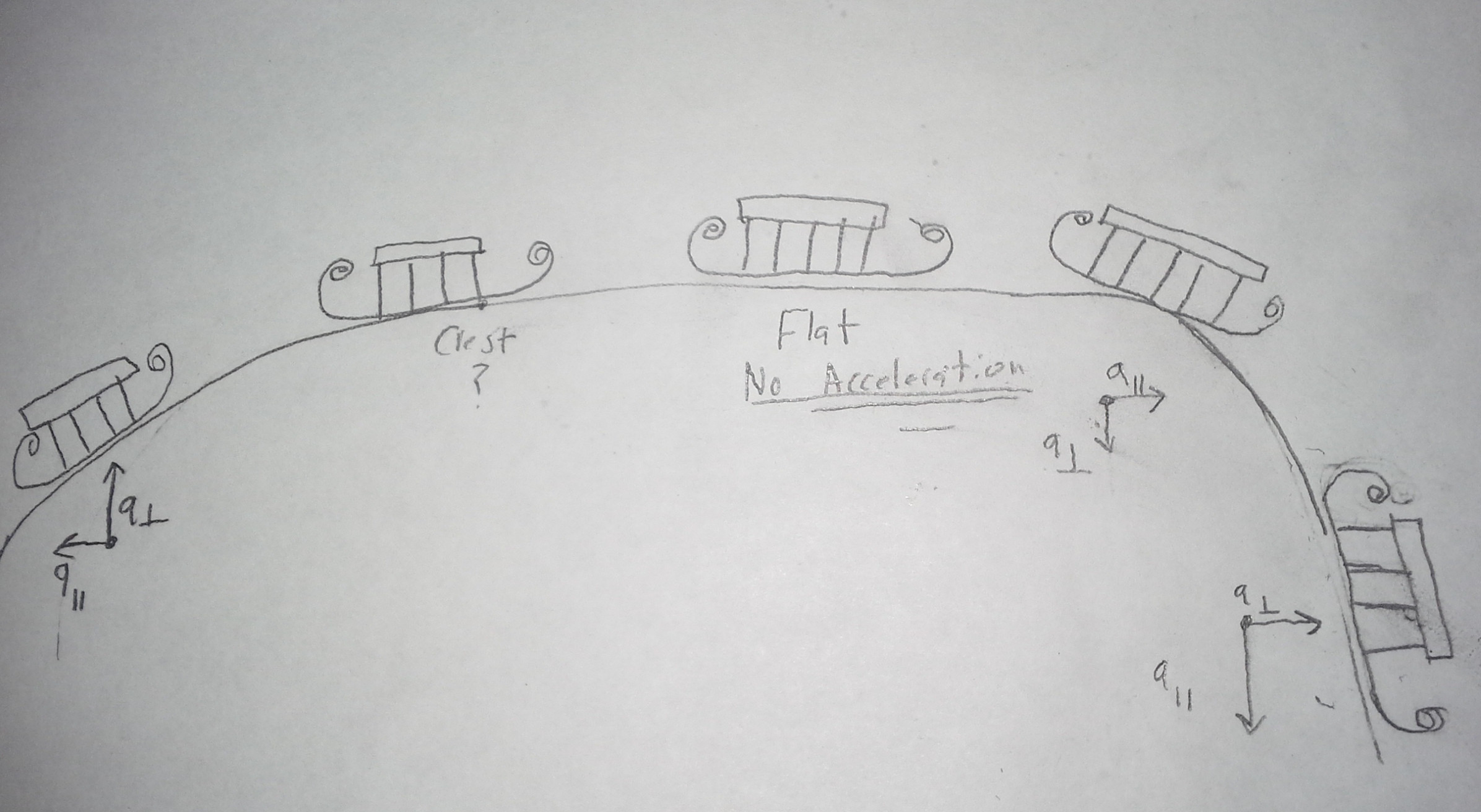 But in my physics book, we have this image, and by my 8th grade science teacher's Beard, the trough is fairly analogous to the crest. And here, we have a trough... and it's a trough with an acceleration vector on a similarly behaving object. 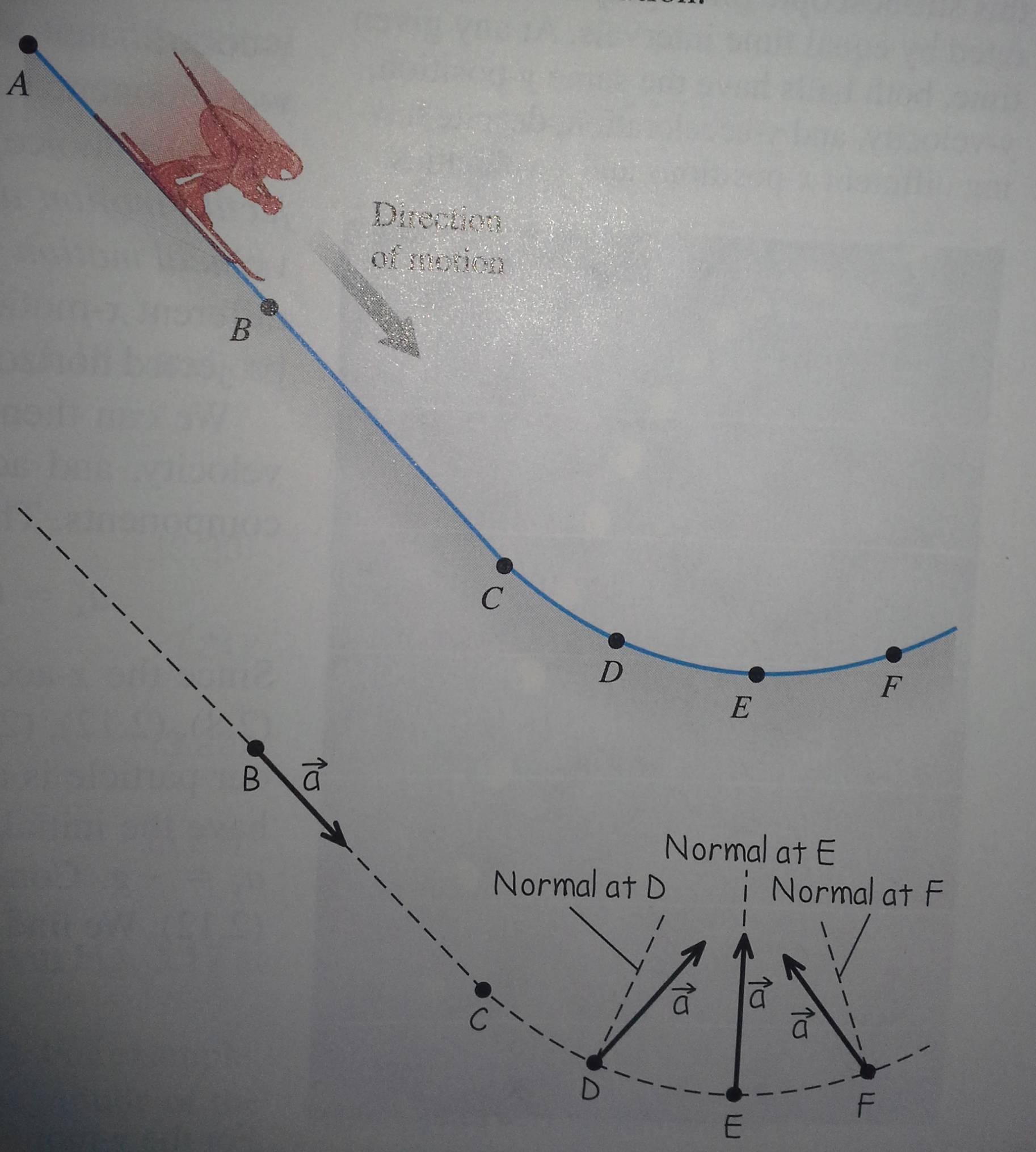 This suggests that the answer to the question using the diagram below - which vector is the acceleration vector? - is number 7 - despite the fact it seems as if normally there would be no acceleration there since the point of the crest qualifies as flat. 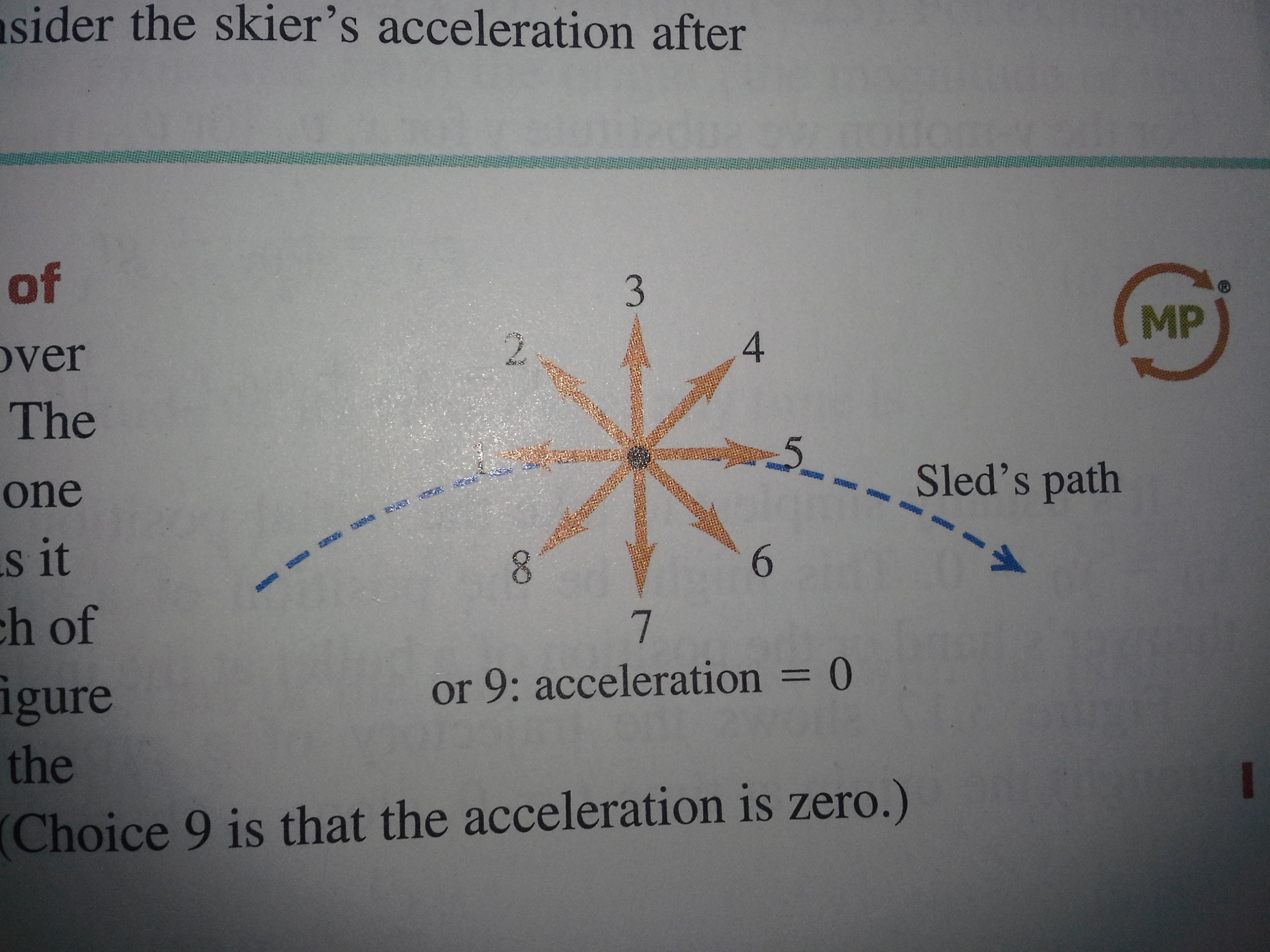 First off, which vector in the above image (1-8, or 9 for zero vector) describes the acceleration vector of the sled going over that crest?

Now let's say I know how to program my computer with 2D graphics. If I were to animate that sled going over the crest as shown in the book with the acceleration vector at every point right next to it, but the crest then becomes flattened as in my hand-drawn image what would the vectors look like?

If I were to make the similar animation for the skier going down the hill, would there be any differences in the acceleration vector, other than the obvious mirroring?

You are right that the difference between a crest and a trough is qualitatively just a mirroring. However, there is another subtle difference between the two cases. The skier is only on "level" ground for a single point along the path, while the sled on the hill is on level ground for an extended region. That is, your paths are not truly mirror images of one another.

Velocity is a vector, meaning it's direction must be taken into account. Acceleration is the change of velocity over time. On the crest the direction of the velocity changes continously, so there's an acceleration. In your hand drawing the sled passes over a horizontal terrain. Velocity does not change direction so there is no acceleration on the flat.

But, as already stated here, the main difference between your crest and the skier's trough is the presence of curvature across the entire trough. Curvature demands acceleration normal to the surface, as pointed out by @KvdLingen.

To turn the direction of your motion you always need to accelerate sideways.

2
Acceleration vector for an object moving in a elliptic trajectory