Is the $N$ factorial in the Partition function for $N$ indistinguishable particle an approximation?

I suspect that the $N$ factorial in the partition function for N indistinguishable particles $$ Z = \frac{ Z_0^N } {N!} $$ is an approximation. Please someone correct me if I am wrong and why or why not. Thanks.

statistical-mechanics identical-particles
Share
Improve this question
edited May 13, 2014 at 18:28

The factorial factor $1/N!$ is exact but does not apply to all statistics. 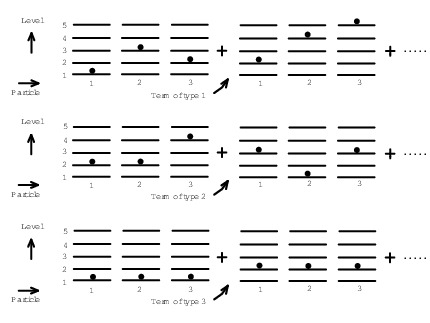 In the figure above, consider the different configurations that are possible with 3 particles and 5 energy levels. Dividing by 3! gets the symmetry factor correct only for configurations of type 1 but is wrong for configurations of type 2 and 3. You can see this by explicitly writing out $Z$ and comparing with $z^3/3!$. That is why the OP's statement that $z^3/3!$ is an approximation is correct. I can add details to this, if necessary. (Notation: The lower-case $z$ is the single particle partition function)

To add to Josh's remark above, even for fermions where terms of type I are only allowed, the expansion of $z^N/N!$ contains terms of type 2 and 3 which are not present in $Z$. Nevertheless, the dominant contribution at large $N$ (as well as number of energy levels) is from terms of type 1. Hence my statement that it is a fairly good approximation holds.

The claim that at high enough temperatures the number of accessible quantum states will be much larger than the number of particles is not true for all systems, for example it is false for those with bounded energy spectrum (such as the ideal paramagnet or the example the OP gives). Also, how high the temperature needs to be depends upon the system. For an ideal gas at atmospheric densities it's a good approximation for temperatures much above 1K.

The above is true for quantum particles (Fermions or Bosons). In the classical limit the quantum energy-level separation is taken to zero and the spectrum becomes continuous. For a continuous spectrum the probability that two particles are in exactly the same state is zero, and so the approximation becomes exact in this limit. Note however, that there is no such thing as a classical two-level system, such as the example given by the OP. A classical system with two local minima can in some cases be treated as a two level system, but this is in itself an approximation.

EDIT: This seems to be wrong. See other answers.

Not the answer you're looking for? Browse other questions tagged statistical-mechanics identical-particles or ask your own question.