Is observation a component of the Lorentz transformation?

For a while I've been trying to write a simple geometric derivation of the Lorentz transformation, based only on the second postulate. Although I'm able to successfully derive the Lorentz transformation, the geometry of that derivation is always a combination of relativistic effects (ie. Lorentz contraction and time dilation) together with observational effects related to observing an event through the medium of light.

Is observation a component of the Lorentz transformation?

From what I've understood previously, the Lorentz transformation has always been communicated as a transformation of space-time for a single event from one inertial frame to the same event in another inertial frame. So I'm guessing there's something wrong with the geometry that I'm deriving. 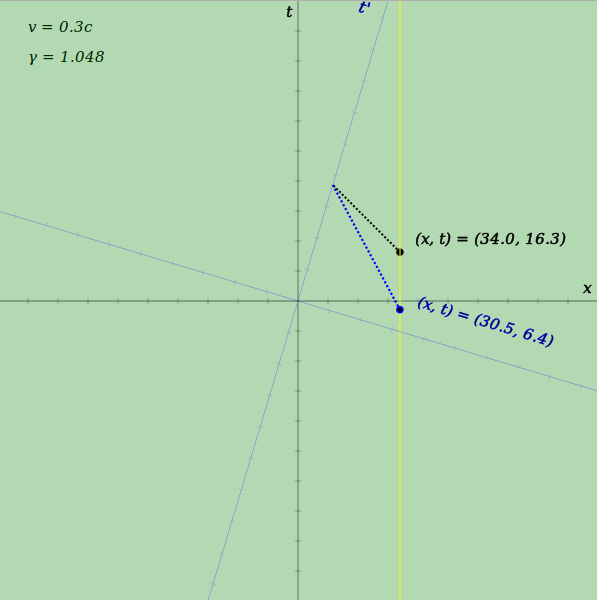 No, the Lorentz transformations do not include the travel time of the photon from the transformed event to an observer.

The Lorentz transformations do indeed derive from a geometrical property, but the property in question is the invariance of the spacetime interval:

I don't really understand your diagram, but it looks as if you've assumed the $S'$ frame is merely the $S$ frame rotated about the origin. If so, you've got off on the wrong foot. If you draw the original and primed coordinates together they look more like:

Not the answer you're looking for? Browse other questions tagged special-relativity visualization time-dilation or ask your own question.