People investigate and talk about orbital angular momentum (OAM) of photons. For example, see this well-cited paper here and the PRL here. The latter starts with the remark

It is well known that photons can carry both spin and orbital angular momentum (OAM).

Maggiore's book on Quantum Field Theory talks about the spin (or helicity, to be more precise) of photons by working out the action of the spin operator on one-particle photon states (see my answer here) brushing aside the action of OAM operator.

This is an interesting mix of misconceptions:

By definition, a photon is a one-particle state with definite momentum and helicity. In quantum mechanics, the OAM doesn't commute with momentum, and therefore a momentum eigenstate is not an OAM eigenstate. By that logic, individual photons cannot have definite OAM.

Now, here's the important thing: there is no requirement that the mode functions $\mathbf f_n(\mathbf r)$ be plane-wave states with circular polarization. It's a convenient choice, but it's not the only possible choice. Photons are excitations of the classical mode in question. Thus, if the classical mode is a plane wave, the photon will have a well-defined linear momentum, but if it is e.g. a Laguerre-Gauss or a Bessel mode, it will have a well-defined orbital angular momentum.

And, exactly as with the basis mode functions themselves, a photon with well-defined angular momentum can be understood as a superposition of photons with well-defined linear momentum (and vice versa), in the same way that you can expand a plane wave in terms of Bessel functions and vice versa. More importantly, this extends to linear combinations of modes with different frequencies: these give single-photon wavepackets, which evolve in time and are not eigenstates of the field hamiltonian, but are still $N=1$ eigenstates of the photon-number operator and therefore equally valid as single-photon states as the single excitations of a monochromatic plane wave.

OK, thus far for the standard description of how to deal with orbital angular momentum within the larger framework of quantum electrodynamics and quantum field theory, or within the more restrictive subsets of those that are often called quantum optics. However, just because you can describe something in a quantum way doesn't mean that you need to, but unfortunately ruling out alternative possible explanations, as you ask in your second question,

Is there some physical example that cannot be explained without assuming that individual photons carry nonzero OAM in addition to spin (or helicity, to be more precise)?

is a rather hard proposition.

However, OAM in this respect is no different to any other degree of freedom of light, and for any experiment that requires photons and a quantum-mechanical description on a given coordinate, you can produce an working experiment built on OAM, from Mandel dips to Bell-inequality violations to quantum cryptography, for which a good review is

Now, if you want a direct mechanical detection of the angular momentum carried by a single-photon excitation of an OAM mode, then that's unlikely to be feasible - in the same way that it's likely to be infeasible for the linear momentum of that state, because both are very small and very hard to measure. In that respect, atomic absorption experiments showing modified selection rules are likely to be conceptually sufficient, but I'm unsure whether the experiment has been done as yet.

Finally, if you want a comprehensive yet readable introduction to the subject of the angular momentum of light, I would recommend

R.P. Cameron. On the angular momentum of light. PhD thesis, University of Glasgow (2014).

If you read the wikipedia article on orbital angular momentum of light you will see that in the first place it is a classical electromagnetic concept, where the light has a vorticity, i.e. a helical motion around the axis of the vortex.

When one goes to the quantum detail of photons one can define an OAM against this classical axis for each photon in this specific classical electromagnetic beam. Thus OAM is not an intrinsic characteristic of photons, but only on photons in special beam distributions, as in the figure: 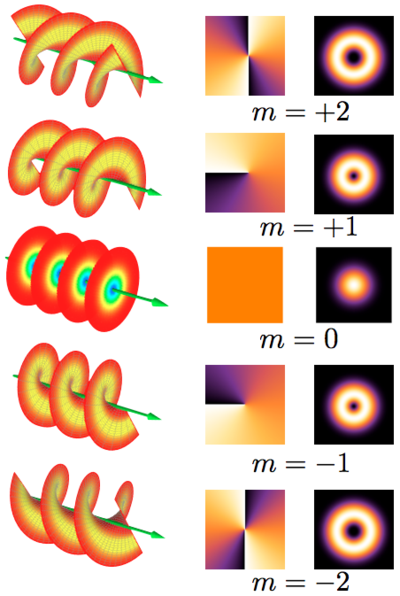 Edit after edit of question:

As far as I understand, in case of a free non-relativistic massive particle moving in a straight line, the value of L=r×p can be made to vanish (for all times) by choosing the origin of coordinates on the trajectory. Therefore, a free particle in classical mechanics need not have a nonzero orbital angular momentum.

As photons do not bind in potential wells, (except black holes by gravitation which is another story), there is no orbital% angular momentum because no orbits.

edit after discussion in comments:

%Definition orbital angular momentum as in this link.

Not the answer you're looking for? Browse other questions tagged quantum-field-theory optics photons angular-momentum quantum-optics or ask your own question.

6
Plane wave expansion in cylindrical coordinates
2
Photon spin and total angular momentun
4
How are the two independent states of polarization of photon related to the two helicity states?
3
What is the connection between quantum optical photons and particle physics' photons?
2
Can a single photon have circular polarization?
3
Is the intrinsic parity the only contribution to parity for single-particle systems?
0
What is the electric field due to a coherent radiation? Is it polarized?
2
Angular momenta of photon
0
What is the complete set of parameters that describes a photon in free 3D space?
1
Is it possible to increase the orbital angular momentum (OAM) of a photon?
See more linked questions