Push a box in a plane with friction. How to deal with the rotation?

Suppose I have a box (say, length-1m, width-1m, height-0.5m) on the plane with friction. I can apply a horizontal force in on the surface of the box.

If the force doesn't pass through the center of the box, then the box will rotate. My question is, how to solve the angular velocity, angular acceleration and the center of rotation?

I'm not sure about my idea. The problem is that the box doesn't necessarily rotate around its C.O.M, right?

Who can give me the right approach to think about this problem?

Thank you very much!

Simplifying the problem slightly, I think it can be solved. Assumptions:

Now we can draw a picture of the box at some point: 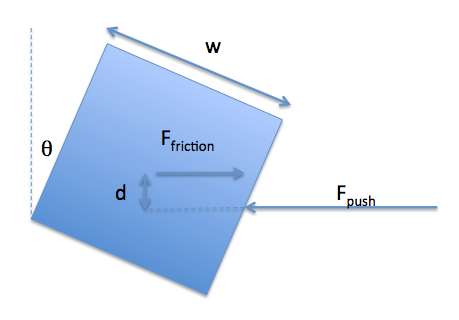 Now your question was - "what is the force of friction, and how do I deal with the fact that the apparent origin of rotation may not be the center of the box?" That deserves some more thought.

This should make the problem more tractable in terms of the equations of motion - at every moment in time, you can write down the total torque on the box as the sum of the applied torque (from the pair of forces shown in my picture) minus the frictional torque (due to the rotation of the box) plus the net force on the box (after taking account of the torque) accelerating the center of mass. I will see if I have time later to write down the equations more fully.

Not the answer you're looking for? Browse other questions tagged classical-mechanics rotational-dynamics friction rigid-body-dynamics or ask your own question.

1
Modeling a stool with three legs pushed on one leg

2
What causes a tall box to tip over on an inclined plane?
1
How does ground interact with a box rotating around its corner?
1
Spinning ball gently lowered onto rough floor
1
Friction during pure rotation
0
How can an engine provide more torque at the point of contact than the ground's response by static friction without slipping?
0
Torque on accelerating tire