Surface charge in a wire? 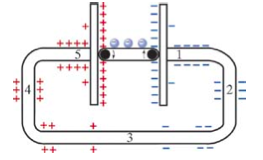 I don't understand the question and the diagram associated with it, partly because it contradicts with something I learned.

I was told that if I have a DC current in a straight current, by Ohm's law $\mathbf{J} = \sigma \mathbf{E}$, the electric field lines must be all directed along the current. So I don't see a way by which surface charge can build up on a straight conductor.

Now, maybe there is a way by which your diagram makes sense, but I don't know how to relate it to the above description. In typical Physics-II courses, when you deal with capacitors, you also consider the so-called spherical capacitor, which is just a conducting sphere. The other plate is imagined to be at infinity. If the sphere must have a potential, it must have a corresponding amount of charge, and by $Q = CV$ it has some capacitance.

Now, each segment of wire (assumed to be ideal) in a circuit has a potential. Maybe you could think of it as a capacitor with the other plate at infinity and assign it a capacitance. By $Q = CV$ (where $V = 0$ at infinity), it must have a charge on it.

On the positive side of the circuit, there is a positive potential, so $Q = CV$ with $V > 0$ gives you a positive charge etc.

Here's a simple explanation: the wire is assumed initially to have a net charge of zero. That is, for every electron, there is a proton. Because charge is conserved, and you haven't provided any mechanism to add or remove charge from some external mechanism, there must be an equal number of positive charges (protons missing an electron, holes) and negative charges (extra electrons).

You can also think of this: if you understand why there are equal and opposite charges on a capacitor (points 5 and 1, in your diagram), then the same reasoning applies to the wires on opposite sides (points 4 and 2). Two wires make a capacitor just like two parallel plates, the only difference being that the capacitance is much less, since the wires have less area, and are separated by a greater distance. In fact, if you imagine yourself as a charge in this system, the plates and the wires are really all the same thing: conductor. The wires are just an extension of the plates, as far as the charges are concerned.

Not the answer you're looking for? Browse other questions tagged electromagnetism electricity electrostatics electric-circuits or ask your own question.

3
Why doesn't a gaussian surface pass through discrete charges?
14
Relativity and Current in Wire
3
Electric field in a wire?
2
How do capacitors work?
0
Why does surface charge not move?
1
Field inside a wire?
2
How do electrons distribute themselves along a wire attached to one pole of a battery?
1
Charge of electron in AC/DC circuit
1
Effect of a current carrying wire on a point charge
1
How can a current carrying wire be electrically neutral if the wire at rest is already electrically neutral? (relativistically speaking)