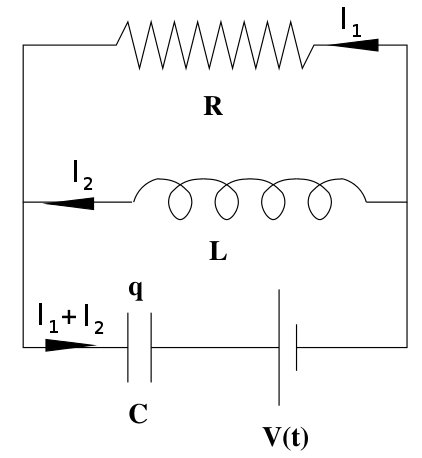 This is how ideal and impossible circuits elements behave, but it's a starting point for a simple analysis: At discontinuous changes in circuits,

1) inductors have the same current immediately before and after the discontinuity, but can have discontinuous voltage changes. The current will then change exponentially/sinusoidally/both.

2) capacitors have the same voltage immediately before and after the discontinuity, but can have discontinuous current changes. The capacitor voltage will then change exponentially/sinusoidally/both.

3) the current and voltage associated with resistors can both change discontinuously, following $V_R = I_R R$.

4) You must be meticulous with sign conventions on these relationships.

At $t=0^+$, the voltage is turned off. Technically, there are two ways to interpret this: $V(t)$ is replaced by a straight wire (a short, which is what EEs do when they kill a voltage source) or, $V(t)$ is totally removed and an open takes its place (which would be like having a switch in series with the source). The behaviors will be different, but the starting conditions of the inductor current and capacitor voltage are the same.

The inductor current will initially be zero, and the voltage across the capacitor is $V(0^-)$.

If the objective is to determine parameters at steady state it could be simpler to approach this situation with these 2 assumptions in mind :

Not the answer you're looking for? Browse other questions tagged homework-and-exercises electric-circuits electrical-resistance capacitance inductance or ask your own question.