I've always heard fusion depends on incredible temperatures and pressures, but I'm curious what the temperature dependence of fission is.

For instance, if I had uranium and heated it to a sufficiently hot temperature wouldn't it decay at a faster rate at some point? I'm not talking about 300 K, but instead say we had 5800 K or 11600 K or 17400 K. At some point I would expect the decay rate to increase, so does anybody have more information on this?

Temperature of the neutrons has abundant qualifiers on it. Neutrons in a fission reactor are really in a transient state - moving from genesis to absorption again. They are generated at extremely high energies, and absorbed at much lower energies on average.

We don't often measure the temperature of neutrons in the same units as the fuel. The fuel is in Kelvin $K$, whereas the neutrons are most often stated in electron-volts, most commonly $MeV$. Going between the two isn't a problem. There's no theoretical difficulty in applying the same relationship between particle energy and temperature as we do for gases ($ {\tfrac {1}{2}}m\overline {v^{2}}={\tfrac {3}{2}}k_{{\mathrm {B}}}T $). In fact, for light water reactors (LWRs), the neutrons are in direct momentum exchange with protons that exist in the moderator. They're even of similar masses. In the lower part of the neutron energy spectrum, in fact, the neutrons are relatively well thermalized to the moderator temperature, but it depends on the reactor design.

Here's one illustration of that: 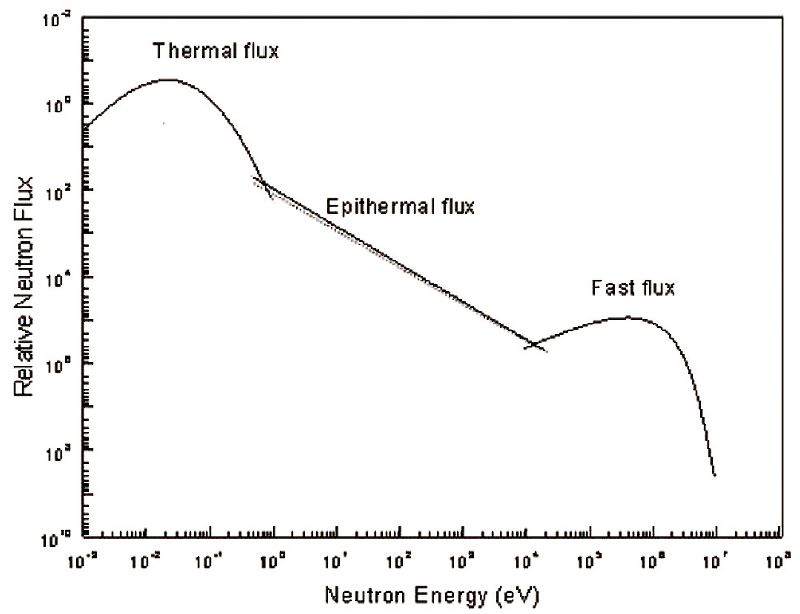 You can see that there is a "thermal flux" hump. This exists around the temperature of the reactor moderator. But we can't say it's the same. Even though the protons (in water) and neutrons are about the same mass, the neutron energy distribution is shifted toward the higher energies, because they downscatter from higher energies to begin with, and they are preferentially absorbed by the fuel at lower energies.

In commercial LWRs, the reactivity is related to temperature via two major interplays:

I should note that our reactors will come to equilibrium given enough time (provided we build them stable). So if you change reactivity, then ultimately that will result in a change in the fission reaction rate. But practically, the operators control the reaction rate with engineered methods (control rods), and that is set by regulatory concerns.

So if you change the moderator temperature, you will change the reaction rate. As I've described, this is due to mechanisms that vaguely fit the intuition you had. Changing temperature literally changes the temperature of the neutrons. This matters for the reaction because neutrons are absorbed by the fuel at lower energies much faster than at higher energies.

Things are a little bit more wonky than this, because a higher reaction rate produces more heat, which heats up the reactor more - creating a feedback loop. But we can still control the temperature of the moderator/coolant that we pump into the reactor.

The role of fuel temperature is much more complicated. This is the resonance absorption peak Doppler broadening effect. Basically, there are lots of very very narrow absorption peaks in the epithermal range (in the graph). As the fuel heats up, these "smear" out into larger energy ranges. With the peaks less sharp, there are fewer "windows" though the neutrons can sneak through the downscattering gauntlet.

The doppler effect is actually the dominant effect for the reactor control. It's honestly the main thing that we rely on for keeping the reactors stable, since it's clearly a negative feedback, and it acts very quickly (since most the the fission heat is deposited directly in the fuel).

So let me conclude by saying that #1 has a lot of mechanistic qualities that resemble the intuition you had about temperature (in the conventional sense) affecting reaction rate. On the other hand, #2 is more important for operating reactors, and it's qualitatively quite differently from the fusion temperature and reaction rate interdependence.