I have expressed my self in a detailed way. I've labeled the points to which I want an answer.

I have doubt in the Einstein's rail experiments which he mentioned in his book.
In this experiment we preassume events A and B are simultaneous with respect to the embankment. The observer $M$ observes the events $A$ and $B$ simultaneously.
The point of view of $M$ for the observer $M^{'}$ is:
"According to me $M^{'}$ will observe event $A$ sooner and event $B$ later,that is "dissimultaneously" due to motion towards right with respect to me(embankment)."

$3.$ What is the point of view of $M^{'}$ for himself,that is would the events $A$ and $B$ as seen(observed) by himself be "dissimultaneous?

My guess is that there exist oly one "reallity" of observer $M^{'}$. We know for sure this reallity as calculated by the observer $M$. If there is only one reallity of $M^{'}$ then the point of view of $M^{'}$ for himself will be:
"Today I was in atrain, I don't know if it was moving or not. I saw two flashes of light namely A and B. They were not simultaneous. Infact A occured earlier than B.
I ask why the reallity of $M^{'}$ should be the same?
One can answer: If the reallity of an observer is different for different observers then this will be a paradox. To explain this paradox consider this thought experiment:
One's experiment
A metallic ball $b_0$ is placed on a wedge inside the train as shown: 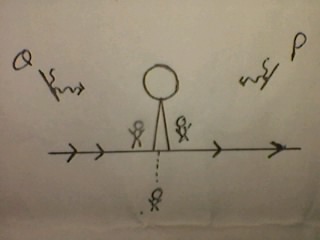 Train is moving towards right w.r.t outside observer. Two sisters "Sheela" and "Munni" are standing near the wedge. Naturally when the centre of the wedge coincide with the outside standing observer say $O$ two fashes of light $P$ and $Q$ occurs simultaneously in train's frame. After some time when train stops $O$ goes to the train and meets "Sheela" and "Munni". He finds both of them alive.
He thinks "were $P$ and $Q$ simultaneous in my frame?" But if so then in my frame train is moving so one of the light rays would hit the ball earlier than the other and one of the two sisters will die with the heavy ball fallen. This can't be true because in reality there can't be paradoxes, either the girl should alive or not so reality for my frame and the train's frame should be same. And i've seen them alive so $P$ and $Q$ are not simultaneous in my frame.
As the train is moving towards right in my frame so $P$ should occur later than $Q$ so that both the rays of light would hit the ball simultaneously.
We see that the reality(fate) of "Sheela" and "Munni" is that they both are alive so we should accept the consequence of "STR"(i.e. the breaking of simultaneity for different observers).
We also see that the demand for the reality to be same is that $P$ and $Q$ must not be simultaneous for $O$.
I argue to one's experiment:
"The reality for observer $M^{'}$ can be different from what the point of view of $M$ is for the reality of $M^{'}$. In other words if reality is same then $M$ s thinking is that $M^{'}$ has faced both A and B dissimultaneously so when $M$ will meet $M^{'}$ after stopping of train $M^{'}$ should tell him that A and B occurred dissimultaneisly but it can also be the other way round.
When $M$ will meet $M^{'}$ the reply of $M^{'}$ can be:" NO! both A and B were simultaneous".
If reality of $M^{'}$ is different from $M$s point of view we will be in a paradox. This paradox exists. A similar can be realized in practice as explained below:
Anupam's experment
Consider an apparatus managed by $M^{'}$ inside the train: 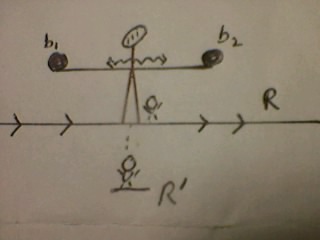 A long stick is placed on a wedge. Two metallic balls are placed at its two ends. Another wedge is placed at the mid of the stick upon which an egg is balanced. Two observers are there $R$ and $R^{'}$. $R$ is sitting inside the train near the wedge. $R^{'}$ is standing outside. Train is moving towards right w.r.t. $R^{'}$.. Naturally the wedge and $R^{'}$ coincides at this very moment two light rays are sent from the wedge in the opposite directions as shown towards $b_1$ and $b_2$.
The reality of $R$ for himself is:" The two rays hit the balls $b_1$ and $b_2$ simultaneously. The balls falls simultaneously. The stick remains balanced. The egg is alive!."
The reality of $R$ from the point of view of $R^{'}$ is:
"Since the train is moving towards right so the ball $b_1$ will be hit earlier than $b_2$. $b_1$ and $b_2$ do not fall simultaneously. The stick has lost its balance. The egg has fallen. The egg is dead!."
The paradox has appeared in reality.
The reality(fate) of $R$ is different from his point of view than $R^{'}$'s.

Let me address Anupam's experiment, because it seems to me this is the real thrust of your question. It seems to you that different things happen depending on the frame. In one frame the egg survives while in the other it's broken. To explain why this doesn't happen let me modify your experiment slightly:

So how come in Anupam's experiment the egg stays balanced in the rest frame but falls over in the moving frame, but this doesn't happen in my experiment. It's because in Anupam's experiment you have assumed that the beam starts rotating instantly when one sphere falls off. But this can't happen because when one sphere falls off the other sphere can't react in a time shorter than $2d/c$ (assuming the beam length is $2d$) because the change in the force on the beam can't propagate faster than $c$. This is the point of my modification to your experiment - in my experiment the change in the force on the beam propagates at the speed $v$ that I put into my experiment. In the moving frame this speed $v$ is different for the two spheres and this difference exactly balances out the original difference in the light signal arrival time.

It would be pretty complicated to work out exactly how the torque on the beam evolves in the moving frame, but the point of my experiment is that you don't have to because no matter what happens in between you can be guaranteed that the effects of changes in the spheres will arrive back at the egg simultaneously in both frames. There is no paradox - the egg stays balanced.

This is not an "answer" as such but an attempt to be very clear about the difficulties with the question.

You are not being clear enough about making it possible for all observer to verify what happened when and where.

in the Einstein's rail experiments which he mentioned in his book. In this experiment we preassume events A and B are simultaneous

But we don't presume anything. We rig the experiment so that this can be verified in a leisurely way at a later date.

The experiment does not leave any room for ambiguity about who see what to have happened when and where.

Right now your questions does not have that property.

Now, to explain just what I mean about making it unambiguous:

This is written about in many ways, so rather than relying on a link to another source I'll write down the version I'm going to talk about.

Alice stands on an embankment watching Bob standing in a train car that is passing at constant velocity. Around the time it passes two bolts of lightning hit the edge of embankment arbitrarily close to the passing train car leaving charred marks on the back and spattering dirt and ash onto the sides of the train (now we have permanent marks each observer can use).

Alice, standing on the embankment sees both flashes simultaneously and later verifies that she is standing halfway between the char makes on the ground.1 From this she concludes the strikes happened simultaneously.

There are a bunch of assumptions here:

This is not dependent on any semantics about "Did they happen at the same time or were they observed at the same time?" because we rigged it so that they each stood halfway between the events. Note that this means that in each frame the two questions are the same as long as the speed of light is a constant.

But we know that Bob sees the light from in front of him first (he must because Alice see both flashes at the same time...).

There are only two possible explanations:

As long as the speed of light is measured to be the same in all inertial frames (a verified experimental fact) there is no room for any conclusion that preserves simultaneity.

Make the question clear and the resolutions will be evident.

aWorried about that later verification of distances?

Presume that each person also has a long, reasonably rigid pole and a tool to cut it to length. having seen the flashes and noted that they can still see evidence of where the lightning hit in their own frame they place the pole flat on the ground and slide it until it is at rest in their frame with one end lined up with a scorch mark then they cut their pole to length. This standard is used to check the distance to the other mark by the same method. All without moving from their original spot.

Not the answer you're looking for? Browse other questions tagged special-relativity time or ask your own question.

5
Why is causality preserved in special relativity?