Why do batteries work? 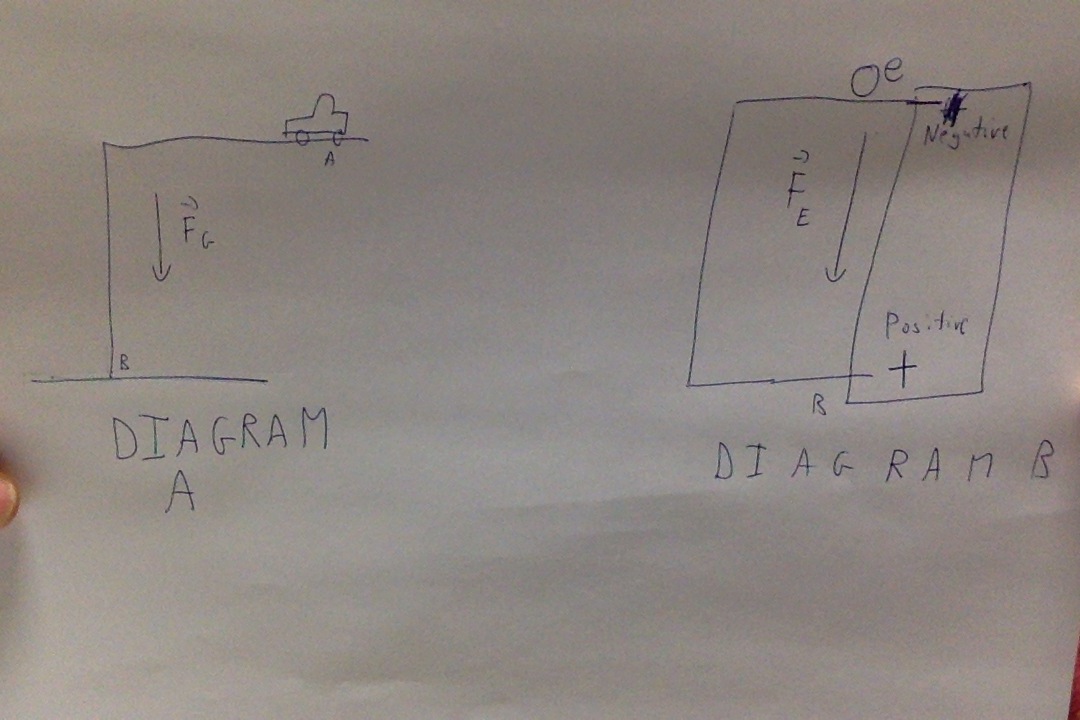 Consider diagram A. In diagram A a car is at the top of a cliff. Gravity is pulling it down, but it does't move since its on a flat surface. Even though it would be at a lower potential at point B, it can't get to point B because the force of gravity is perpendicular to the direction it can move.

In the left image, the vehicle is prevented from moving downwards as the ground is exerting a force upwards equal to the force of gravity on the vehicle. However, in the case of the electric circuit, there is no such opposing force. The orientations of the conductors attached to the battery terminals doesn't have an effect on the flow of electrons (unless there is a poor connection) as they flow through the conductive material as opposed to trying to move in a direct line towards the region of lower potential.

As such, most people find it easier to use a "water" analogy when explaining electric circuits. In this case the electric potential can be considered as a pump or other source of potential, as seen in the figure below (the valve would be analogous to a resistance). As soon as a pipe or path (wire) is provided between the pump and an area of lower pressure (potential) then the water will flow, regardless of the shape or orientation of the pipe. This same principle applies to the flow of electrons in the system you have described. 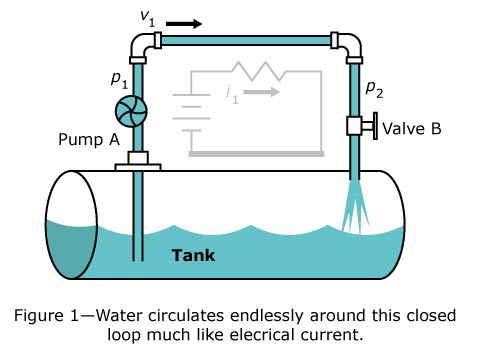 Hopefully this answers your question adequately, I come from an engineering background, so my answer isn't as rooted in electromagnetic theory as others may be.

In a stationary situation a conductor will have an electric field of zero, since all mobile charges/electrons will have moved to its surface.

In situation B the electrons will still be located on the surface of the conductor. But the electrons near the poles of the battery will be pulled towards or pushed away from it which causes a local dislocation of charges. These dislocations will cause a change in the local charge concentrations, which will induce an electric field and will push or pull nearby electrons. This way the potential difference between the poles of the battery can travel through the entire wire.

So to summarize, you can look at electrons in a wire as a train, so if you push on one side (and pull on the other) the entire train will start moving.

Here's the flaw in your diagram B: You've filled space outside battery with uniform $\vec F$ pointing downward. What's the source of it? To match with Gravity, you need a horizontal charged surface outside battery.

Second, you're thinking about Electrostatic Force with battery. Battery actually generates emf (Electromotive Force) to drive electrons. emf isn't really a force (emf is potential difference between battery terminals which can be measured in wire, not in space like that of in Gravity case), but direction of force (which isn't Electrostatic Force) caused by emf is along the length of wire (not along a direction in space). Here's the relationship:

Electric field caused by emf isn't conservative, that's why we get positive work done even in circuit. That wouldn't be the case if it was like electrostatic field generated by point charge.

Not the answer you're looking for? Browse other questions tagged electricity batteries electrochemistry or ask your own question.

9
Why is there no current flow when I connect two opposite terminals of two separate batteries?
1
Trying to understand the electric potential and potential energy
1
Stacking batteries and electron flow
16
How does a wire carry alternating current?
0
Current electricity basics
1
The inside of a variable resistor (potentiometer)
1
External work required to move charge
0
Why can't we add the emf of two batteries in a parallel circuit?
0
Would there be a potential difference across a cell connected with just a wire in complete circuit?
0
Why electric field not coming out of a conductor when current flows?