What makes a rainbow happen?

A rainbow is formed when a raindrop refracts light, but why then does the whole sky not become a huge rainbow when it rains? Would the light not be dispersed into ordinary white light? What causes it to look as if each end is nearly touching the ground?

1) Light from the sun strikes a spherical raindrop across half of its entire surface. So every angle of incidence A from 0 to 90 is represented.

2) Some of the light will reflect (uninteresting), but some will enter the drop. Its path bends due to refraction, entering the drop at an angle B (found by Snell's Law) that is always less than A. This means that it is always less than the "critical angle" C that corresponds to A=90°.

3A) The light strikes the back of the raindrop at the same angle B. Some of it will exit the drop, bending again. The reverse of Snell's Law applies, so that it exits at angle A.

3B)... and some will reflect. Many explanations will incorrectly say that Total Internal Reflection occurs. That can only happen if the angle at the back is greater than C, which is impossible.

4) The light that reflects repeats this process every time it encounters the surface from the inside. Light that exits after one reflection makes the primary rainbow. The total deflection angle D, relative to your own shadow, depends on A and the color of the light, and looks like this: 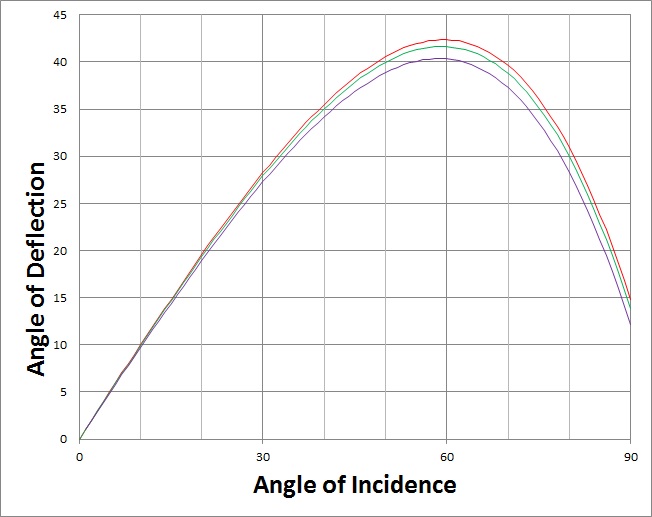 5) Look at just the red line. It has a maximum around A=60° and D=42°. But the range of A's that produce angles that are close to 42° is much greater than the range that produce any other angles. As a result, red is much brighter around 42° than anywhere else. There is dimmer red inside of 42°, but no red light outside of 42°. If the sun had only red light (as it does near sunset, see http://d3819ii77zvwic.cloudfront.net/wp-content/uploads/2014/06/main11.jpg), you would see a filled-in, red circle with a very bright rim.

6) Each successive color in ROYGBIV has a similar, but smaller, circle. As a result, the bright rims are situated at different places resulting in the colored bands you see.

7) The rainbow still exists inside the colored bands. It is a dim, white disk. It has no specific features like the colored bands do, so it isn't often noticed. But outside the red band there is no light reflected, so the sky appears noticeably dark there. It's called Alexander's Dark Band.

8) Light that reflects twice does the same thing, at about 50 to 53 degrees. But the center of its white disk is on the sun, behind you, and the white disk wraps around the zenith. The red band is still on the outside of the disk, but that is now "down" to you so the colors appear reversed.

The best is probably to give you an insightful link. You will find there an applet which illustrates the following, which is your intuition:

Since rays from the sun have all possible values of andle of incidence between 0 and $\pi$ when hitting the water sphere which is a droplet, you could expect the eye to see refracted rays coming from all directions as well, thus forming a coloured disk for all colours, hence a "sky color" disk, i.e. nothing special at all.

The trick is that when a combination of refractions and reflection like the one just described happens, then the reflection and refraction coefficients come into play. You may find the details of Snell's law and Fresnel's formula here, but the crux of the matter is that such coefficients are dependent on both angle of incidence and wavelength. As a consequence the final intensity which gets to your eye is a highly dependent function of the angle of incidence of the ray of light (and a function of wavelength).

It so happens that this function displays a sharp maximum for a certain value of angle of incidence (which itself depends on the wavelength of the light). Therefore, for each colour you do see a disk, but this disk is much brighter at the edges of the disk, where such maximum occurs. Hence, you see an annulus instead of a disk. Moreover, the diameter of each disk is different because it is dependent on the wavelength, therefore your eyes perveives a set of annuli of different colours, next to another, i.e. a rainbow.

0
Why can't we see Rainbows from its end points?
7
Is it possible to witness a circular rainbow?
5
Do rainbows show spectral lines from water?
3
Double rainbows

5
What shape is formed by the set of all raindrops which create a rainbow to specific observer?
7
Can anyone explain to me why light is not dispersed into a spectrum through a parallel glass slide, but only through a prism?
1
Why is a rainbow curved in shape?
4
Why is rainbow always circular?
0
Can we see everything?
41
Why aren't rainbows more common?
31
Why aren't rainbows blurred-out into nothing after they are produced?