Why does a faraday cage protect you from high currents?

In an electrostatic case it is clear that that in a space enclosed with a conductor (without charge in it) the electric field is zero.

This is often demonstrated in physics shows like on the following image: 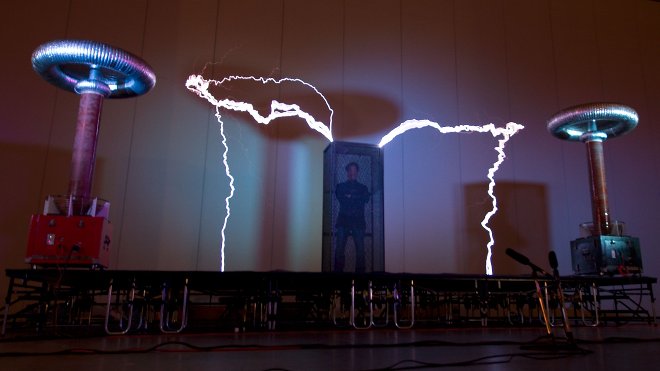 However it you have the lighting a current is flowing through the air and through the cage. So we are not in the electrostatic situation anymore since we have currents, i.e. moving charges.

How can one account in the explanation properly that we have moving charges?

Some people say that the fact that the man inside the cage is safe doesn't have to do anything with faradays cage, it's simply because the the cage is a better conductor. Sometimes also the skin-effect is mentioned.

So what's true. It would be great do get a detailed and correct explanation of this. Do you have any good references?

Faraday's cage is known to block static and non-static electric fields. The mechanism of blocking depends on whether the electric field is static or non-static (EM field). I suppose you question is about how the cage works in non-electrostatic case.

In EM case (time changing field), two scenarios could happen. The first is electric discharge where the current flows from a distant electrode to the cage. The second is an EM wave with high power propagating toward the cage generating its current locally within the conductor. I will explain how the cage works for both cases.

With respect to the first case, it can be mathematically described by charge continuity equation (equation 3 in this link). This equation basically relates the current flowing through a conductor to the charge accumulating in it.

What happens in the first scenario is that the external current (being moving charges) coming from the electrode accumulates at the point where it (the spark or the streamer) hit the cage. Because the cage is a conductor the charge continuity equation tells us that the local accumulation of charge where the spark hit the cage will cause current to flow within the conductor to remove that accumulation. The characteristic time required to remove the accumulation is called the relaxation time. It can be derived from charge continuity equation. For the derivation have a look at pages 57-59 of this document. I think that is taken from a book called Elements of Electromagnetics chapter 5.

The second case is related to EM waves where they generate their currents locally within the conductor, that is where the skin effect comes into play. An EM wave penetrates into a conductor the Skin effect occurs. In general, EM waves when they penetrate a conductor they are attenuated until their fields become almost zero. A characteristic depth of penetration is called Skin depth. The skin depth is the distance it takes an EM wave to be attenuated to certain value. This skin depth depends on many factors such as conductivity and frequency, the following figure taken from Wikipedia shows the skin depth of different materials for different frequencies: 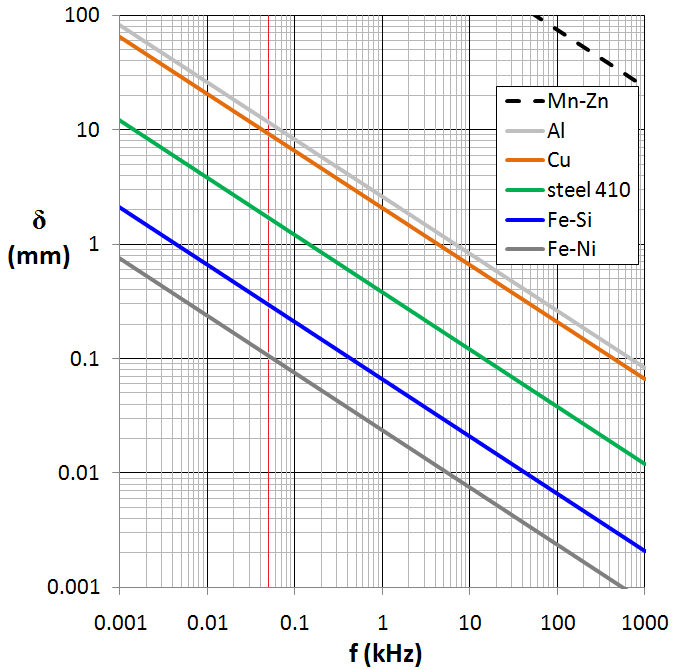 For the cage to protect from EM waves, it is thickness has to be larger than multiples of skin depth at the particular frequency of interest.

So briefly with respect to the second scenario, the skin depth becomes relevant when we speak about shielding from electromagnetic waves rather than discharge current.

I think the cage in the picture shows scenario 1. You can clearly see the distant electrodes and the point at which the spark hits the cage

There will be some voltage built up accross a Faraday cage when there is current thru it. That's just from basic Ohm's law. However, the Faraday cage is ideally constructed with material that has low resistivity, and it's usually arranged in a mesh. You can think of each individual wire in the mesh as being a small resistor. Since the value of these resistors is very small to begin with, and there are many effectively in paralell from one end of the cage to the other, the end to end resistance of the cage is quite small.

Let's say that end to end a Faraday cage has a resistance of 100 mΩ. Even if a jolt of 100 A are running thru it, that will only create a potential of 10 V end to end. The human inside is still quite safe with 10 V accross the cage.

Note also that in the picture he is not touching any of the cage other than standing on the bottom, probably with shoes that provide some insulation. I'm not volunteering to do this, but even a few thousand volts difference between the top and bottom of the cage in that picture isn't going to hurt the person inside. It would take a lot more than that to break down the air between the top of the cage and the person's head.

I have been looking into this too and the best explanation I've found is here: http://cst.mos.org/sln/toe/skineffect.html

To summarize it (and the other articles I read): a Faraday cage is about blocking EM waves and electrostatic charge, whereas, the skin effect is about current flowing on the outer surface of a conductor rather than throughout it. Many people invoke the Faraday effect when they really mean the skin effect. The skin effect applies to AC current, not DC current, which raises the question of why a metal enclosure is effective protection against sparks that flow in only one direction, such as lightning and large Van de Graaff generators. The answer is that a "DC spark" is more like a short-duration AC current than it is like a DC current. A "DC spark" involves a current that grows and diminishes quickly, so the skin effect takes place.

In short, It works because metals have many "fast electrons". These electrons have good reactions with phonons (thermal conductivity) and radiation photons (electromagnetic field).

There is current explanation in Maxwell Equations terms. Field generates current - current generates field with exact opposite sign and they compensate inside cage.

But, as radiation density grows, metal is evaporating and cage is destroyed.

An external electrical field leads to rearrangement of the charges, and this cancels the field inside. Electric fields (applied externally) create forces on electrons in the conductor, creating a current, which will further result in charge rearrangement. The current will cease when the charges rearrange and the applied field inside is canceled.

Not the answer you're looking for? Browse other questions tagged electromagnetism electricity electrostatics or ask your own question.

4
How does a Faraday Cage work?

0
Are electrons on a conductor, in electrostatic equilibrium, stationary?
0
Why does surface charge not move?
1
Could you make a Faraday cage with a different force law?
1
Wait... why exactly does farady's ice pail experiment prove Gauss's law?
0
Is the electric field inside a conductor zero a result of Gauss's Law?
1
Questions about Faraday cage
0
Electric shielding skin depth
1
Magnetic field inside conductor and linearity of eddy currents
3
Faraday Cage Explain (Gauss Law)
1
Explaining how a magnetic field affects currents in a conductor, in the limit of high conductance