Can a Binary Star system be possible where in one star is stationary and the other star revolves around it? (Just like a planet revolving a star. i.e planets in the system and the star revolving around their own center of masses to balance the system).

Well, motion is relative so you can choose a frame of reference where one is stationary. If you do though, it makes the equations of motion quite complicated.

The center of mass of our solar system moves relative to the sun due to the motion of the Sun and planets. Here is a graph: 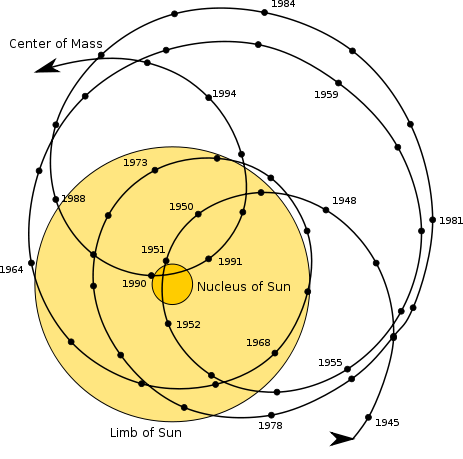 So you could potentially call a body in a system where the barycenter stays inside that body "stationary" but that's not technically correct, no matter how lopsided the masses of the bodies are. For example:

The larger mass will still always move relative to the system barycenter.

But I would like to get back to your original question, "Can a Binary Star system be possible where the mass difference is so large that the effect on the larger star is negligible": There isn't that much difference in the masses of stars. Stars need to be massive enough to generate enough pressure to maintain nuclear fusion, but not so massive that they collapse into black holes. Also, the larger the star, the faster does it undergo fusion and the shorter its lifespan. For that reason the heaviest known stars have just about 100 times the mass of our sun, while the lightest know stars have just one tenth of a solar mass. A mass difference of factor 1000 isn't small enough that the effect on the larger mass wouldn't be notable.

Seeing the massive stars in the existence, yes, it's possible that a Sun type star can truly revolve around R136a1 type stars. R136a1 stars are 265 times solar mass. In a binary system with Sun, it'd contain 99.6% mass of the system. So, center of mass of the system would exist near its own center (so, size of star doesn't matter here).

Not the answer you're looking for? Browse other questions tagged orbital-motion planets stars or ask your own question.

7
Using 2D position, velocity, and mass to determine the parametric position equations for an orbiting body
0
Can a binary star system create a stationary black hole?

10
What if the Moon was 100x more massive: Binary planets?
0
Angular Momentum conservation in star system
3
Classification of binary star system
0
Will two planets in a binary star system rotate in the same circle around the mass center every period?
1
Can a "Solar System"-type system exist without a star or stellar remnant?
1
On Planets orbiting binary stars
1
In what planetary system can we have arbitrarily long winters?
1
Orbit of Celestial Bodies