where does the energy of water droplet go?

My experiment:
I took a string (3 mm diameter and wet) and a water source (1 drops per 2 seconds). Then I attached the string to the water source. The string was then tied to ground

Observation : I saw some small droplets coming down.

Question : where is the energy of droplet getting dissipated ?

Reason for questioning : the droplet moves slowly so it means its loosing some energy somewhere it can be fluid friction but that friction is too small then what is making water droplet go too slow 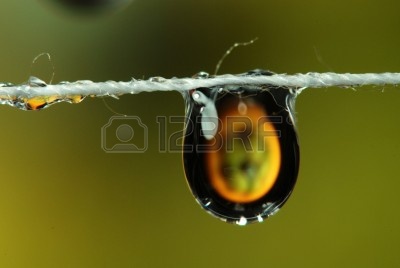 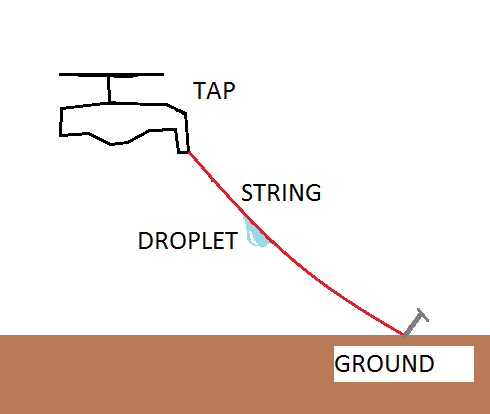 Interestingly, the shape of the droplet you've drawn in the schematic explains it quite well. In droplets moving over a surface (at relatively low velocities) there are two forces counteracting gravity: viscous forces and surface tension forces.

Viscous forces are essentially caused by the no-slip condition at the interface between the droplet and the string. Surface tension forces on the other hand, are a result of the out-of-equilibrium contact angles at the front and the back of the droplet as shown in the schematic below:

In equilibrium the contact angles are a result of the balance of surface tensions as: $\gamma_{sl}+\gamma_{gl}\cos\theta_e-\gamma_{sg}=0$ where the subscripts indicate solid (s), liquid (l) and gas (g). This is in essence a force balance (per unit length) so a contact angle other than $\theta_e$ results in a net force instead of the 0 on the rhs. The magnitude of this force (per unit length) can easily be shown to be: $F/l=\gamma_{gl}(\cos\theta_e-\cos\theta)$ where $\theta$ is the out-of-equilibrium contact angle.

If you apply this to a droplet sliding down you will have an out-of-equilibrium angle both at the front $(\theta_f)$ and the back $(\theta_b)$ that results in a net force of $F/l=\gamma_{gl} (\cos\theta_b-\cos\theta_f)$. It turns out that the sliding velocity would be roughly 5 times higher if this term was neglected with respect to the purely viscous friction, meaning that this is in fact the dominant term (see this presentation by Prof. Limat and references therein).

For reasonable values of the parameters (water droplet of $V=30 \mu L$) this results in around $0.1-1\; \text{m}/\text{s}$ which is indeed much smaller than the free falling velocity of such a droplet which is in the tens of meters per second.

Not the answer you're looking for? Browse other questions tagged fluid-dynamics surface-tension or ask your own question.