How much is known about the composition of ultra high energy cosmic rays (say $E>10^{20}\text{ eV}$)? I get the impression that the particles are often assumed to be protons or other heavier nuclei, but what empirical basis do we have for this? Is there experimental evidence that excludes photons or leptons as candidates? Do we know if the UHE's are matter or antimatter?

I understand that there is quite a bit of literature examining the possible mechanisms of production of UHE's as nuclei of various masses. For example, it could be easier for Iron nuclei to get up to high energies in a magnetic field since they would have to be accelerated for less time than protons.

However, I don't want to put the cart before the horse; the fact is that we don't know where they come from, and so we should not base our knowledge of what they are made of on these theories.

We can make a reasonable guess by taking a look at the Hillas criterion. The gist of this criterion is that the maximum energy of the particle, $E$, is limited by the size of the accelerator, $R$ ($\sim R_L$ the Larmor radius), and the strength of the magnetic field, $B$. The relation gives $$ E_{max}=10^{18}\,Z\beta B_{\mu G}R_{kpc}\,{\rm eV} $$ where $B_{\mu G}$ is the magnetic field measured in micro-Gauss, $R$ measured in kiloparsecs, $\beta=v/c$ the velocity of the accelerator site (i.e., the shock wave), and $Z$ its atomic number. This relation is best understood by looking at it: 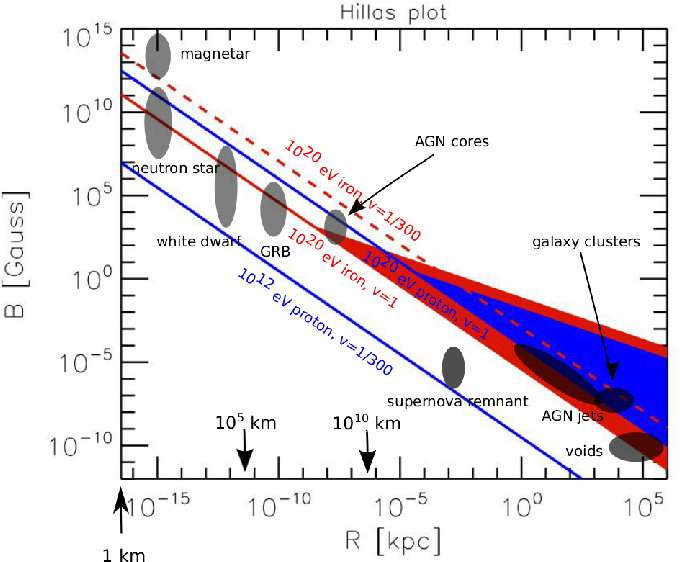 The blue lines represent the maximum energy of a proton in different accelerator sites ($\beta=1/300$ is representative of a non-relativistic shock (e.g. supernova remnant shock) whereas $\beta=1$ is representative of the relativistic shocks (e.g. AGN jets)), the red for iron nuclei. The gray blobs in the plot are characteristic of the astronomical objects magnetic field sizes and radii. Any class of objects above the diagonal line will be able to accelerate the proton/iron nuclei to the marked energies.

Clearly, from the chart, it requires a huge magnetic field ($10^{15}$ Gauss) to accelerate iron to $10^{20}$ eV, hence the magnetar being the only candidate. As for protons, active galactic nuclei (AGN) and their jets are able to accelerate a proton to $10^{20}$ eV with seeming ease, same with galaxy clusters.

So from a heuristic stand-point, the idea that our UHECR's being heavy nuclei appears to be ruled out (note that this criterion has not completely eliminated it or is proof that it's not heavy nuclei, just that it's not likely; and as dmckee says, we get so few at that energy it's just not worth the money to put the equipment to discern it).

To address the actual question of how we know the composition of UHECR without relying on source information (of which we have none), we have to look at their extensive air showers (EAS). After an UHECR hits the top of the atmosphere an EAS is created in the air, but p and Fe will create EAS with different shapes. Properties of hadronic interactions are measured at the LHC and these are then extrapolated to the higher energies (50 TeV and above) of UHECR. Then, shower simulations are done in the atmosphere (with varying atmospheric density, the earth's magnetic field, and everything) to predict the shape of the shower. As these showers propagate through the atmosphere, they fluoresce. Telescopes at the Pierre Auger Observatory (largest CR observatory in the world, is in Argentina) and High-Res (in Utah, provides northern hemisphere information, although is much smaller) measure this fluorescence and plot something they call $X_{max}$ - the depth of the shower from the initial interaction point (in units of $X$: g/cm$^2$ - such that when it is divided by a density it gives a length) at which the maximum radiation is observed. The average and RMS values are then calculated over a series of events and then compared to the simulations.

Auger and High-Res continue to disagree on this point. You can see the Auger data here (arxiv abs) on page 11 by the author or page 16 of the pdf. The red lines are for the predictions for protons across various hadronic interaction models and the blue lines for iron. Auger seems to clearly favor a heavy (or at least heavier) composition at the highest energies.

High-Res data favors proton composition up to the highest energies. Of course, they have significantly less data, but they still claim a significant result. Their data is presented here (arxiv abs) along with pretty plots of representative shower events.

One known problem in the hadronic simulation is that low energy muons aren't being taken into account correctly. It is a problem that CR and LHC physicists are working together to correct, but it will probably be at least a year or two before it is incorporated into the necessary models. Also, there is a working group comprised of members of both Auger and High-Res that is working on sorting out of number of ongoing discrepancies between the two experiments. While the largest has to do with the energy spectrum, I am sure that this is on their list as well.

A rather comprehensive overview from Auger can be found here (arxiv abs).

Conclusion: this is very much an open problem. Future telescopes such as JEM-EUSO on the ISS may be able to improve the data here and solve this problem. In addition, improved data from the LHC may bring the experiments into agreement, or improving the experiments' systematics may resolve the problem. Finally, JEM-EUSO may provide enough data that could be confined with galactic and extra-galactic magnetic field information (that would have to be dramatically improved) to put some limits on charge once one or more source(s) is(are) identified.

I'm a bit outside of my expertise here, and perhaps someone who knows in detail will be along, but here goes...

Given all the above it becomes reasonable to assume protons.

Folks are remarkably coy about stating explicit compositions. I suggest contacting the Pierre Auger Collaboration for datasets or explicit references,

arXiv:1201.6265 "Studying the nuclear mass composition of Ultra-High Energy Cosmic Rays with the Pierre Auger Observatory." I don't see any nuclear masses listed, though there are some suggestive graphs.

arXiv:1312.7459 "Galactic CRs should extend to energies of the order of a few 10^17 eV and that at such energies the chemical composition should be dominated by iron nuclei." "Should" is not bolstered by listed numbers

Not the answer you're looking for? Browse other questions tagged particle-physics experimental-physics astrophysics cosmic-rays or ask your own question.

8
Where do ultra-high-energy cosmic rays come from?
5
Why is the distribution of Cosmic Rays isotropic?
2
Do AGN produce protons that are relativistic enough to collide with the CMB and make pions?
2
Supersymmetry particles from cosmic rays
0
Can cosmic rays show interference?
2
Galactic or Extra-galactic Cosmic Rays?
1
What affects the propagation of secondary cosmic rays?
0
Solar modulation of cosmic rays