Several attempts were made to explain this tiny effect, called the Pioneer anomaly, but none was fully accepted in the scientific community so far.

Two months ago, Frederico Francisco et al have proposed another solution to the problem. They assume, roughly speaking, that the thermal radiation of the spacecraft caused by plutonium on board along with the actual structure of the probes is responsible for this mystery of modern physics.

Here an image of Pioneer 10 taken from Wikipedia along with a sketch of the radiation model employed in the paper: 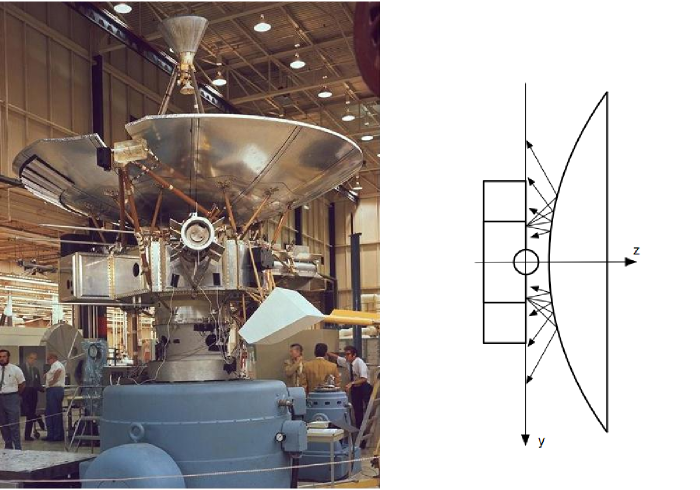 Is the Pioneer anomaly finally explained?

I'll stick my neck out and say that the answer to your question is simply "yes."

First off, these detailed thermal models are complex and hard to do, so we want confirmation from independent groups. We have that: Rievers and Lämmerzahl, "High precision thermal modeling of complex systems with application to the flyby and Pioneer anomaly," gr-qc/1104.3985

Second, we could ask whether these results contradict previous work. The answer is basically no. Previous work was simply sloppy. There is a nice talk on this topic here by Toth: http://streamer.perimeterinstitute.ca/Flash/a2cc528b-1d36-4a2e-af73-5f81b8b17477/viewer.html There is a long history where people did back-of-the-envelope estimates of the thermal effects and said, "Look, the order of magnitude is too small to matter!" It just turns out that the back-of-the-envelope were wrong.

Finally, all of this stuff is very tough to be sure of, because there are so many uncertainties about things like the degradation of the white paint on the RTGs. Therefore it would be good to have independent ways of testing the hypothesis of a gravitational anomaly, without having to use the Pioneer data at all. We do have these independent tests. If the effect obeyed the equivalence principle, it would have had effects on the outer solar system that are not in fact observed: Iorio, "Does the Neptunian system of satellites challenge a gravitational origin for the Pioneer anomaly?," gr-qc/0912.2947

A NASA team recently (july 2011) doubled the amount of available data related to the pioneer anomaly, and they saw an exponentially decreasing acceleration with a 27 year half life, consistent with the thermal scenario. More precisely they say :

The rationale for an exponential model is based on the possibility that the acceleration may be due to thermal recoil forces generated on-board. Due to degradation of the RTG thermocouples and changes in the thermal louver system, the resulting thermal recoil force could have a half-life significantly shorter than the 87.74 year half-life of the ²³⁸Pu fuel, with 27 years being in the acceptable range.

For them "The most likely cause of the Pioneer anomaly is the anisotropic emission of on-board heat" and promise a more detailed analysis.

The paper is arXiv:1107.2886 (now published in PRL) and there is a short discussion on it on The Physics arXiv Blog.

From my (scientist but non-expert) point of view, this temporal decay looks like an independent confirmation of the thermal origin of the Pioneer anomaly and basically settles the question.

Edit (2012-04-20): The same team just published arXiv:1204.2507 another confirmation, based on a detailed modelling of the thermal radiation of the spacecrafts. The last sentences of their abstract says:

As a novel element of our investigation, we develop a parameterized model for the thermal recoil force and estimate the coefficients of this model independently from navigational Doppler data. We find no statistically significant difference between the two estimates and conclude that once the thermal recoil force is properly accounted for, no anomalous acceleration remains.

See Braking of the space crafts caused by the vacuum fluctuations.

Quantum fluctuations are able to cause the braking of the spacecrafts (Pioneer spacecrafts anomaly), as these fluctuations cause bodies to approach closer to one another (the Casimir effect). A new quantitative formula of wave energy loss in vacuum is proved and presented in this article. It gives the wave energy loss per one oscillation of a de Broglie wave: $W = Hhc/v$. This formula permits direct calculations of the cosmological redshift and braking of the spacecrafts.

Not the answer you're looking for? Browse other questions tagged general-relativity astrophysics cosmology thermal-radiation or ask your own question.

0
Has the Pioneer Anomaly been experienced by Voyager?
0
Best EM/Photon rocket using avalable tech?
1
The magnitude of spacecraft anomalous velocities?

3
What is a quasar flux ratio anomaly?
0
Taking into account scale expansion for the path taken by a photon
1
Does the scale factor evolution in a matter dominated universe allow for acceleration?
0
Strange anomaly in the calculation of the cosmological constant
1
Why isn't this anomaly in the CMB taken more seriously?
0
Derivative of mean anomaly w.r.t true anomaly