Here is a description of the principle of the operation of a new lightning device:

During a storm the ambient electric field may rise to between 10 to 20 kV/m. As soon as the field exceeds a thresold representing the minimum risk of a lightning strike, the OPR lightning terminal is activated. It draw its energy from the ambient electric field the energy required to generate high voltage pulses, creating and propagating an upward leader. No other power sources are required, and no radioactive components are used.

Which is a minimal frequency of the oscillations so that such device can work properly?

A full description of the device

The quotes you give do not really explain much.

With a conductor one can short the static field of the atmosphere, one does not need oscillations for that. I think it was Benjamin Franklin with reaching the clouds who discovered that first hand?

Lightening strikes when naturally induced upward leaders reach and meet the charged cloud downward leaders creating a path of ions for the energy to go through. This happens when the fields are strong to strip neutral molecules from their electrons and create an ionisation path.

Edit, correction: Just saw the link you provided. It seems that it works in channelling the lightning to the rod instead of playing russian roulette on where it will hit. It is the logic of simple lightning rods, so that the energy is sent to the ground without damaging the buildings. The proposed design makes sure that this will happen instead of leaving it to the probable fields that would develop naturally with the simple lightning rods.

Whether the mentioned device is effective or not I can not guarantee (Although I don't see any problem in the working of the device and its basic principle seems to be more or less same as an ordinary lightning arrestor).

Let me slightly elaborate the way a lightning arrestor works in general.

A lightning arrestor generally consists of a metallic rod with a sharp pointed terminal, called prong, at the upper end and it is fixed at the highest point of a building. It is grounded by a good conductor.

Whenever a charged cloud comes above the device it induces opposite charges in the upper portion of the lightning arrestor. Since the upper terminal is pointed the charge density is maximum there and a lot of charge leakage takes place from the prong.

Those charges move upward by Coulomb attraction and neutralize the cloud as much as possible so that the chance of a lightning strike becomes less. However for a heavily charged cloud the discharge phenomenon is so fast that before it is neutralized fully by the upward moving leakage charges of opposite sign, a lightning strike takes place.

Since the L.A. is installed at a high enough place, the chances of catching a lightning strike by it is high, since it provides a path of very low resistance to the ground. In other words, it provides a safe passage to the very high electrical discharge thereby saving the building. Normally it safeguards an area which lies within an imaginary inverted cone where the tip of the cone is on the point of the prong. Apology for the bad drawing by me on paint brush :) 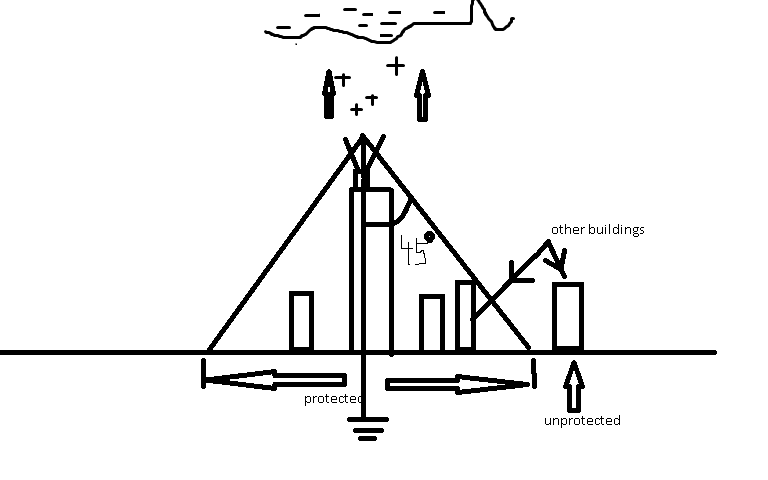 Not the answer you're looking for? Browse other questions tagged electromagnetism geophysics electrical-engineering lightning or ask your own question.