The meaning of action

is an important physical quantity. But can it be understood more intuitively? The Hamiltonian corresponds to the energy, whereas the action has dimension of energy × time, the same as angular momentum.

I've heard the action being described as a measure of change, although I don't know how this description can be justified.

The action $S$ is not a well-known object for the laymen; however, when one seriously works as a physicist, it becomes as important and natural as the energy $H$. So the action is probably unintuitive for the inexperienced users - and there's no reason to hide it - but it is important for professional physicists, especially in particle and theoretical physics.

The OP's statement that the Hamiltonian corresponds to energy is a vacuous tautology because the Hamiltonian is a technical synonym for energy. In the same way, one might say that the action intuitively corresponds to Wirkung (a German name) because it's the same thing, too. Because it now has two names, it becomes more natural :-) and the OP could also blame the energy for having "unnatural" units of action per unit time. In other words, the question assumes that energy (and its unit) is more fundamental and intuitive than the action (and its unit) - so it shouldn't be surprising that using his assumptions, the OP may also "deduce" the conclusion that the energy is more fundamental and intuitive than the action. ;-)

Of course, the only difference is that non-physicists don't learn to use the action at all. The energy may be imagined as "potatoes" which every can do; the action is an abstract score on the history that is only useful once we start to derive differential equations out of it - which almost no layman can imagine. If the laymen's experience with a concept measures whether something is "intuitive", then the action simply is less intuitive and there is no reason to pretend otherwise. However, physicists learn that it's in some sense more fundamental than the energy.

What the action is in general

Otherwise, the main raison d'etre for the action is the principle of least action, which is what everyone should learn if he wants to know anything about the action itself.

Historically, this principle - and the concept of action - generalized various rules for the light rays that minimize time to get somewhere, and so on. It makes no sense to learn about a quantity without learning about the defining "application" that makes it important in physics. Energy is defined so that it's conserved whenever the laws of Nature are time-translational symmetric; and action is defined as whatever is minimized by the history that the system ultimately takes to obey the same laws.

The energy is a property of a system at a fixed moment of time - and because it's usually conserved, it has the same values at all moments. On the other hand, the action is not associated with the state of a physical object; it is associated with a history.

There is one point I need to re-emphasize. For particular systems, there may exist particular "defining" formulae for the Hamiltonian or the action, such as $E=mv^2/2$ or $S = \int dt(mv^2/2-kx^2/2)$. However, they're not the most universal and valid definitions of the concepts. These formulae don't explain why they were chosen in this particular way, what they're good for, and how to generalize them in other systems. And one shouldn't be surprised that one may derive the right equations of motion out of these formulae for $H$ or $S$.

Instead, the energy is universally defined in such a way that it is conserved as a result of the time-translational symmetry; and the action is defined in such a way that the condition $\delta S = 0$ (stationarity of the action) is equivalent to the equations of motion. These are the general conditions that define the concepts in general and that make them important; particular formulae for the energy or action are just particular applications of the general rules.

In the text above, I was talking about classical i.e. non-quantum physics. In quantum physics, the action doesn't pick the only allowed history; instead, one calculates the probability amplitudes as sums over all histories weighted by $\exp(iS/\hbar)$ which may be easily seen to reduce to the classical predictions in the classical limit. A stationary action of a history means that the nearby histories have a similar phase and they constructively interfere with each other, making the classically allowed history more important than others.

As a layman, I can't offer too much, but I can offer how I think about action.

In the case of simple harmonic motion (a mass, spring system for instance) we can use the following equations for the different types of energy:

I would refer you to most elementary texts, but the solution for position as a function of time for the simple harmonic system described is: 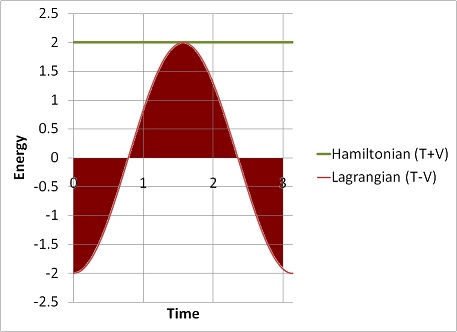 When it comes to the least action principle (as discussed by others), we set:

Which is done by considering the effects of a infinitesimal change in position $\epsilon$ so that $x$ becomes $x+\epsilon$ (I will refer you to chapter 2 of Quantum Field Theory Demystified for a good discussion on this).

In any case, the objective is that the equation that one desires (newton's equation of motion, or what I like to think of as a force equation) is one that satisifies the $\delta S = 0$ constraint, which in this example, has the effect of keeping the value of the action (the area under the curve) constant.

I hope that helps, I will edit for more content if needed.

[Note: I would add that if one is clever, they can make the half cycle infinitely long, which would make the action non-zero in the case of a SHO]

Here comes an attempt at an intuitive analogy:

You must have heard the classic "the shortest distance between two points is a straight line" , in euclidean geometry.

The action integral is analogous to distance in the generalized coordinates of the system under study. Its minimization gives the shortest path in configuration space going from time t1 to time t2 and is called the principle of least action. Applying it leads directly to Lagrange's equations, from which the equations of motion of the system are derived.

Chapter 2 of H. Goldstein's "classical mechanics" (available on the web) is a good introduction to this and to variational principles.

Action is a function of the upper limit of integration (if $L(t)$ is specified), so it grows from zero when $t_2$ goes farther and farther from $t_1$. In this sense, action is a "measure of change".

An intuitive understanding of action might be the following: on real trajectories its growth rate might be minimal but it is not the case, unfortunately. Instead, we have the least action requirement: $\delta S = 0$ between two fixed points.

11
Physical meaning of the Lagrangian function
0
What is Action?
1
What is the physical significance of a Lagrangian and an action in particle physics?
0
Information contained in Lagrangians and actions
37
What is the physical meaning of the action in Lagrangian mechanics?
21
In what sense (if any) is Action a physical observable?
8
Translation Invariance without Momentum Conservation?
7
What exactly is the Action? (Learning lagrangian)
6
Physical Interpretation of a Scalar Quantity Related to Currents/Conservation Laws
6
Uses for Action from Lagrangian Mechanics
See more linked questions

1
With radian as a unit, should action and angular momentum have the different units?
2
Conceptual problem with action considered as function of endpoints
0
What sort of mathematical operator is the Action in Quantum Mechanics?
5
Is there a deep reason why action comes from a local lagrangian?
4
Can you numerically compute a trajectory by direct minimization of the action functional?
0
What can "action" mean in "All the action takes place inside the rocket"?