My experience with solitons is restricted to the classical setting, namely solutions to the quartic interaction $\phi^4$, the Sine-Gordon equation, and Korteweg–de Vries equations. I was explicit to show the boundary on my solitonic knowledge so that I could ask for an interpretation of the recent paper

In particular I do not understand the difference between solitons and vortex rings. My confusion stems from the introduction to the video Baths and Quarks.

In the intro David Tong is blowing toroidal shaped bubbles, which I thought were examples of solitons. A phenomena which dolphins exhibit for play. However, in the watered down discussion of the aforementioned paper the nomenclature vortex ring is used. Moreover, the so called "heavy soliton" posited in the Fermi gas is shown to be a quantized vortex ring. My guess is that the difference in word usage stems from the language of superfluid density functional theory. However my lack of expertise in the subject allows me to not go further than guessing at this stage.

Could someone explain the difference, if there exists any, between the usage of the words soliton and vortex ring?

You have to define what a soliton is. The most accepted definition in field theory is that a soliton is a stable, localized and finite energy/energy density solution of the equations of motions of the theory. A vortex ring is localized in space, it has finite energy and definitely is the solution of some equation of motion. Then if it is stable, it can definitely be called a soliton.

With a basic understanding of physical geometry we can understand this difference. A soliton is a KIND of pseudosphere created by the rotation of a tactrix, however, this particular kind of pseudosphere is harmonically generated by the negation of itself. We can say that if the natural growing pseudosphere has a one dimensional rotational property then the soliton has another dimension of rotation. 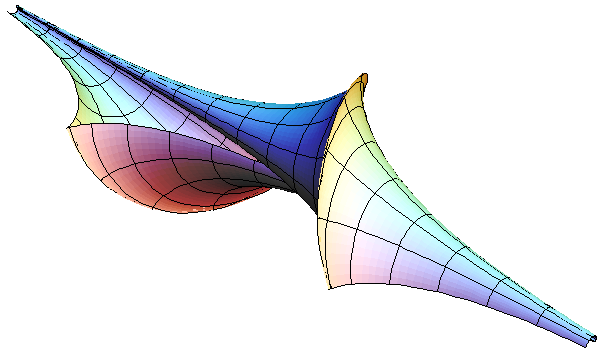 It is far easier than wracking your brain around forumulae, to conceive of this as a tactrix derived from the inverse of the catenary rotated about its point at zero in Cartesian space and then spun about itself again so that like surfaces face each other, forcing some of it to become inside out. It is because of this 3D property of the soliton that it requires a certain amount of space and more specific values, this is why it is fundamentally governed by harmonic-geometrical forces that are only accessible in the complex domain.

The Vortex ring is simply caused by a pseudosphere that is not limited by the same harmonic forces. So it continues to form a torus around the zero point of the tatrix. These rings can be CAUSED by solitons because of the soliton's inherent pseudospheric origin but they are not solitons in themselves. However, it proves nothing to say that something is a vortex and not a soliton if the fundamental cause of the vortex is not addressed.

Not the answer you're looking for? Browse other questions tagged fluid-dynamics vortex superfluidity solitons cold-atoms or ask your own question.

7
What is the definition of soliton?

0
Are solitons an example of collective motion?
2
Applications of Optical Solitons
4
Maximum speed of a toroidal vortex?
3
Are static black holes solitons?