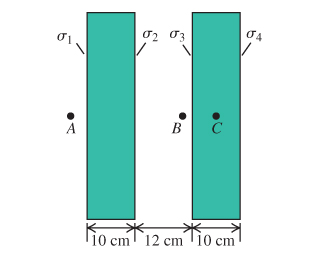 Attempt: So, using Guass' law, I attempt to place the charge densities into a surface and use $E = \frac{\sigma}{2\epsilon_0}$, representing the sheets as infinite thin sheets.

For B, I have a surface encompassing $\sigma_1, \sigma_2$ and one encompassing $\sigma_3, \sigma_4$. Well, again $\sigma_1$ goes into the surface, and the other three go out of their surfaces, so it would be the same answer as for A, but apparently this isn't right. I would use the same methodology for C, but it would be wrong. I don't understand how to approach this.

Edit: I have read solutions to this elsewhere, but they aren't in-depth enough and aren't satisfactory.

I am unable to add comments, so I give a few hints here

Not the answer you're looking for? Browse other questions tagged homework-and-exercises electrostatics electric-fields gauss-law or ask your own question.

2
Gauss' law giving zero field where field is not zero?
1
Variation - Electric pressure on a sphere?
1
Electric field around two charged hollow cylinders
4
Gauss Law for a Modified Coulomb's Law
1
question about Gauss law
1
Two positively charged plates - can the electric field be negative inside?
1
Gauss law when dealing with materials with conductivy
1
Why is the field inside a capacitor not the sum of the field produced by each plate?