it is commonly argued that the equivalence principle implies that everything must fall locally in the same direction, because any local variation of accelerations in a small enough neighbourhood is equivalent to an inertial force.

Is the purpose of this question is to understand, what are the bounds for a frame to be considered local, when the space might be compactified, and some of the macroscopic asymmetries of fields we see are explainable by symmetries in the inner dimensions.

For instance, consider the following argument: antimatter cannot fall away from matter, otherwise a local frame falling toward matter will not see local antimatter falling inertially

don't get me wrong, there might be good reasons why in the particular case of anti-matter, it will fall exactly like regular matter (some of those might be found on this answer), however, i'm concerned about this particular argument.

In a compactified space, what we mean with locally in the context of macroscopic observations needs to be refined; for instance consider the scenario where antimatter (or for the purpose of avoiding controversy, lets call it $matter \dagger$ ) falls gravitationally away from regular matter; it seems to me that the principle of equivalence still holds if what we mean as a local neighbourhood means actually:

in this scenario, $matter \dagger$ falls inertially in its own neighbourhood given by removing the regular matter sector from the local neighbourhood in the whole space (macroscopic plus compactified)

I even made a ugly picture of the so called scenario: 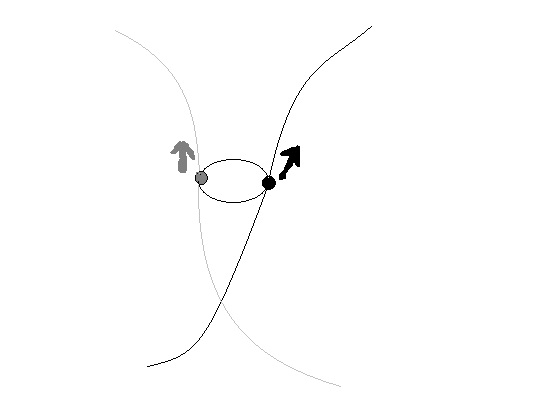 Question 1: Are there known reasons why such reinterpretations of the equivalence principle, taking into account the additional dimensions, are flawed?

Question 2: What does the original Kaluza-Klein theory has to say about how and under what forces the electric negative and positive charges move?

I'm sorry for the rather crude arguments, hope the intent is rather clear though

the error in your scenario is that matter and antimatter live at "different places" of extra dimensions which they surely can't. By definition, antimatter is being created by the Hermitian conjugates of the operators that create matter. So if a matter species is associated with a particular function of the extra dimensions, $f(x_{\rm hidden})$, then indeed, the corresponding antiparticle species is associated with the function $f(x_{\rm hidden})^*$. The antiparticle has the same probability density to occupy a given point in the extra dimensions.

Indeed, you only need the ordinary Kaluza-Klein theory (i.e. higher-dimensional general relativity with an extra dimension) - and not the full string theory - to make the arguments above as well as to make your original proof that the antimatter is being attracted to the matter just like other matter.

You could still create some extra matter species that live elsewhere (without calling it antimatter which is surely a wrong label) and whose mass is negative - which is a different way of saying that they have a repulsive gravity. In that case, you live at risk that your vacuum will be unstable because pairs of matter and mirror matter may be spontaneously created out of the vacuum without spoiling the energy/mass conservation law.

Despite this pathology, similar scenarios have been proposed to explain why the cosmological constant was small or zero. Most physicists think that the instability kills the model.

Not the answer you're looking for? Browse other questions tagged equivalence-principle kaluza-klein compactification inertial-frames or ask your own question.

1
Anti-matter repelled by gravity - is it a serious hypothesis?