Why does precession only occur at high angular speeds?

I'm trying to understand precession for a gyroscope or top.

I've tried to find an answer in my favorite physics textbook, but it only says that at lower angular speeds, the situation becomes much more complex. Which is not very helpful.

Can anyone explain the basic idea why precession only occurs at high angular velocities. I don't need this for an exam or anything, so I don't require a detailed mathematical explanation. I just want to get the basic idea.

In general, a spinning top will exhibit three types of motion. First, it will rotate about its axis. Secondly, if a constant force is applied, this axis may precess around the direction a of the force. Finally, there is a process called nutation in which the angle between the axis of rotation and the force oscillates, creating a 'wobbling' motion. 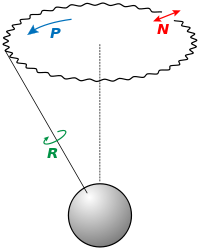 When the speed of rotation $\omega$ increases, the amplitude of the nutation decreases as $1/\omega^2$, which means that for 'fast enough' tops, the nutation may be neglected and you can simply deal with the precession.

If you want to see the mathematical details, Goldstein's Classical Mechanics deals quite extensively with this problem in section 5.7. For a more intuitive physical understanding, try Feynman's Lecture I.20.

Not the answer you're looking for? Browse other questions tagged vectors gyroscopes precession or ask your own question.

5
Why can you assume that the angular momentum vector of a top will always track its axis of rotation?
15
What determines the direction of precession of a gyroscope?
0
Which force acts as centripetal force on gyroscope?
0
Gyroscope precession torque
2
Reasoning behind predicting a gyroscopes motion
7
Feynman's disk paradox used as a gyroscope?
0
How to relate spin speed and time in which a gyroscope falls beyond some angle?
0
Impulse on a Gyroscope
3
Angular momentum without any apparent torque