2 bodies separated by a rope [closed]

Say you have two bodies connected by a "weightless" rope, one hanging from a ledge on a pulley (classic pulley problem).

If the body that is on the surface and being pulled by the object hanging freely has no friction with the ground then obviously we could just as well discard that body from our calculations, couldn't we?

I have homework and such a problem where a box is being dragged by another box hanging from a ledge on a pulley, except the box being dragged on a frictionless surface which doesn't make any sense to me. 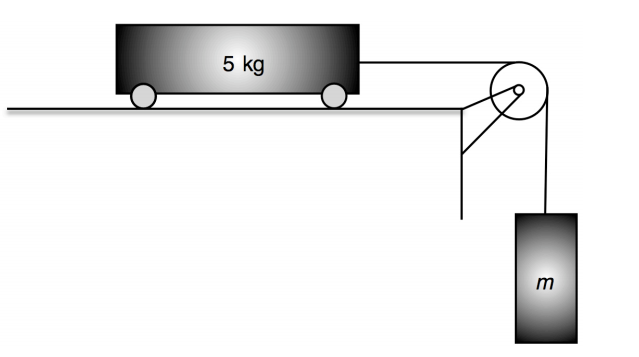 You can't discard that body from your calculations, even in a frictionless case. To convince yourself of that you can just think of the fact that the box would accelerate without the need of any force, which is obviously absurd.

You have to write down Newton's second law separately fro the two bodies keeping Tension into account.

You keep talking of friction but friction isn't a "requisite" for the box to slow down the falling object. In this case the falling object is slowed because it's pulling the box which has an INERTIA (a mass), and this means we have to exert a force to move it.

In this system you have the two object are accelerating at the same rate, right(because of the inextendibility of the rope)? So there MUST be a force responsible for the acceleration of the box and it is the tension of the rope. The force that keeps in tension the rope is given by the falling object wich "spends" a part of his acceleration to move the box. Try to understand the couple of equation I gave you and you will understand my argument.

How can you discard the mass even though the surface is frictionless. Lets say the freely hanging body has mass $m_1$ and the other one $m_2$ and let the wedge make angle $\alpha$ with the horizontal. Draw the FBD to get $m_1g - T = m_1a$ and $T - m_2g \sin \alpha = m_2a$ where $T$ is the rope tension. Eliminate $T$ to get the acceleration $a$ of the system.

Not the answer you're looking for? Browse other questions tagged homework-and-exercises newtonian-mechanics forces acceleration velocity or ask your own question.