My brother and I built a wood burning, convection based, thermal circulating hot-tub. (With and oxyacetylene torch, lots of 1.5" pipe, a brake drum, and a thirty year old jacuzzi). Our design is similar to that of what is manufactured and sold for $7000 by the name of a Dutchtub: 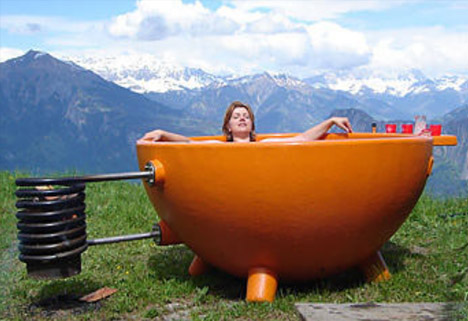 Now As I'm sure you can figure out from the picture, The wood burns inside the coils, heating the water, cold water is sucked in from the bottom and hot water is pushed out the top. Our Version is using a fiberglass luvtub from the 80s or so, that holds approx. 500 gallons of water. After completion of construction and filling we decided to go ahead and test our creation. We knew it would be slow. (given not only that we were heating close to 1,900 litres by convection but that it also happened to only be a couple degrees above freezing. We Started the fire at 17:00 and kept it burning until after 21:00 in the first 20 minutes we already noticed a difference, after an hour or two, the top was steamy and the first six-eight inches or water was ready. however at 21:00 when it was make or break time, we had to call it day. Unfortunately the tub was only up the temperature about a foot down. My brother feels we need to install some sort of pump to increase circulation because he feels the tub temperature is reaching a plateau and our heat loss is too great. I think that install a pump defeats the whole purpose of the tub in the first place. Here's my question(s).

Would Stirring the tub help? Based on my understanding, this would slow the circulation as the difference in temperature would be lower. However the average temperature of the water would be consistent. Therefore the stove would not only not have to change the temperature of the incoming water as greatly, but the warmer water would not cool the stove as quickly as the frigid water sitting in the bottom waiting to be sucked in. There's also the joule effect to be considered which, would make an extremely minimal impact in this instance I would think. Nevertheless, would this, stirring, not make a huge difference in the overall heating of the tub?

A few things to also consider.

1. The Lid Our lid is made of 3/4 plywood that does not make a perfect cover. The wood is also perforated with 3/8" holes every square foot.

2. The Tub It's dug into the ground but only about half way. That is to say that only half the of the tub is subterranean with some dirt packed around the sides. I am under the understanding, correct me if I'm wrong, but packing dirt all around the edges of the tub would help retain heat. As the dirt will act as a heatsink at first but in the long-run it will help maintain the temperature of the tub. As opposed to bleeding that heat out the side of the tub, for the cold air to wisp away.

3. The fire We started with a pretty solid fire inside the stove, then we surrounded the coils with brick (with hole opens so the bottom of the fire/coalbed would still get oxygen and could still be billowed) There was also a chiminea top that we set on top of the coils/bricks, to hold more heat in. (At any given time there was close to a 8-18inch flame shooting out of the top) After some time we changed tactics. We pulled the top and set the bricks about 6 inches away from the coils and made a bigger fire. We knew we wouldn't be retaining as much heat, but there would be so much more produced and the coils would be heating from inside the stove and from out. *Our Stove is less than a yard from the tub but we installed a sheet of galvanized steel to act as a heat shield so the tub won't catch on fire.

In conclusion, how dramatic would our gains be if we, packed dirt all the way up to the lip of the tub, started with the style fire we ended with, and I think, most importantly, stirred the water in the tub?

As you're aware, thermal stratification is occurring. Once the upper surface of the tub is hot the driving force (temperature and therefore density difference) for the thermal siphoning effect is reduced. Mixing the tub will definitely help here.

All the tubs I've seen are very well insulated (they take days to cool down..) so burying it will not have a great reduction in heat loss. Your lid sounds like the weak link as far as reducing heat loss is concerned.

Any fouling inside the steam pipe can significantly reduce heat transfer to the water. In extreme cases by an order of magnitude.

To maintain the 'off the grid' aesthetic while still improving heat transfer a non-electric pump could be used. A water pump from a dishwasher or washing machine could be rigged up to be powered in another way. Some ideas: A wind up mechanism, pedal power, a wind mill (or a 'fire mill' powered from the fires exhaust flow!?), or any other harebrained scheme you can come up with, it won't take much to dramatically improve flow rate from the current thermal siphon rate. Motorcycle speedometer cables are a really flexible (pun intended) way to get rotational energy from one place to another.

I might add that the "thermal circulating" part is generally referred to as a thermosiphon. The more flow, the better. You are working with gravity, and against friction and there is a balance. The longer the pipe coil , the more heat. But longer pipes have more internal friction. You want a relatively short fat coil. Notice how fat the Dutch Tub pipes are. Also you really want the tub above the fire. I can only presume your tub is below the fire considering is partially underground. And lastly water is about the best heat sink around. Allowing the heat to escape the system into the dirt will only work against you. Insulate that thing on all sides.

So, if you want the tub to work better you probably need to insulate it from all sides; particularly the part that is now underground.

Convection will be very effective at moving hotter water upward; the problem is that once the hot water leaves the heating assembly it will continue to move upward from your tub's upper pipe before it mixes with any water below. Your system will thus transfer a lot more heat to the air than to the water below that upper pipe.

If the objective is to heat the water between the two pipes, hot water will have to enter via the bottom pipe. The tub was likely designed with the intention of being used with a mechanically-pumped system, but if the fire were at a lower elevation than the tub it would be possible to use a "figure-eight" arrangement of tubing so as to achieve the required circulation via convection. Using such an arrangement, water that came from the heating coils would be unable to meet the air until after it had passed through the rest of the water and had a chance to transfer heat to it. I can't say with any certainty that convection would be sufficient to heat the tub adequately with the arrangement shown, but it would be better than the arrangement you have now.

While reducing the height of the fire may make things less convenient, it should be possible to have fire burn reasonably effectively in a pit if you provide an unimpeded path for air to reach the fire and an induce enough of a chimney effect to ensure that the heated air doesn't compete with the incoming-air path in an effort to find an exit.

Not the answer you're looking for? Browse other questions tagged thermodynamics thermal-conductivity convection or ask your own question.