How can I estimate confidence intervals around the forecasted temperatures for future days?

Weather.com will happily give me temperature predictions for the next ten days, but no indication of how reliable those predictions are. So if I want to plan something for a week from today, or four days from today, I don't really know whether there's much information in the forecasts. My personal, unscientific (and certainly unreliable) experience says there's not, but there's plenty of variation in the forecasted temperatures, even between days 9 and 10, so the weathermen are not simply falling back to the long-term averages for the time of year.

I'm hoping for a rule of thumb here (so my question is different from this theory-heavy discussion from two years ago). Conceivably something as simple as a fixed interval size for each number of days in the future could work, although I could imagine there being low-hanging fruit in, for example, atmospheric pressure or the proximity of the location being forecasted for to water.

Weather is chaotic. So are the models. If initial conditions change slightly, outcome changes dramatically.

Therefore, models are typically run a number of times, for example, ten runs. Where the runs coincide, the forecast is rather certain. Where they diverge, the forecast is not. Below is an example of such for Bucharest, Romania, run on 28 January 2014: 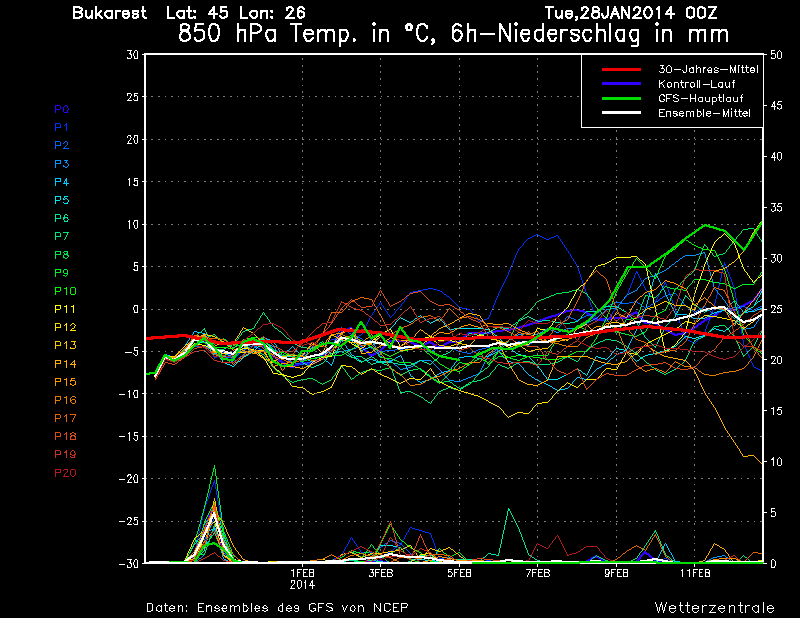 As you can see, the 850 hPa temperature agrees fairly well the first couple of days, but by the end, they are “all over the place”. This kind of plot, which may also be on a map, is also referred to as a spaghetti plot. Although they are not difficult to understand, they do tend to focus on “expert” variables and do not directly translate to precipitation amounts or sunshine hours. They are direct model output.

Below is an example of an NCEP run for the US and surroundings. At 0 hours, all the model runs agree fairly well (fortunately):

At 240 hours, however, it's pretty much spaghetti. This means the forecast that weather.com gives you is pretty much useless:

Through the NCEP website, you can also look at animations and maps of the standard deviations. There are various sources for such ensemble forecasts, and not all are free. The line graph above is from the German website Wetterzentrale. ZMAW links to meteogrammes for European cities. The maps are from NOAA ESRL PSD. Weather.gov also links to a number of sources. If you search the web for spaghetti diagram or ensemble forecast, you may find a lot more.

Not the answer you're looking for? Browse other questions tagged geophysics atmospheric-science weather meteorology or ask your own question.

16
How to calculate the upper limit on the number of days weather can be forecast reliably?

16
How to calculate the upper limit on the number of days weather can be forecast reliably?
1
How can I estimate relative humidity ($e/e_s$) from temperature and dewpoint?
1
Can I estimate the long-term surface heat transfer coefficient based on a temperature difference between the air surface and ground surface?
42
Without seeing the lightning, can you tell how far away it struck by how the thunder sounds?
8
How loud would a sound have to be to be heard around the world?
4
Can anyone explain the REAL reason why CO$_2$ increases global temperatures (not the simplistic greenhouse analogy provided for public consumption)?
1
How does one determine which signs to take for the Gradient Wind Equations?
41
Why do small patches of snow remain on the ground many days or weeks after all the other snow has melted?