Motion of rigid body system in absense of work

In the absence of work on the system, is there a closed form equation for the motion of a set of constrained rigid bodies (let's say, using Revolute (ie: simple pivot) constraints)?

If the bodies are fixed to the ground and subject to gravity, there definitely isn't. For instance, the double pendulum. But if no work is being done (ie: there are no non-constraint forces) does the motion allow a closed form? If so, how do you find it given the initial velocities and configuration of the system?

The center of mass of the system would have a linear velocity, for instance, as a consequence of Newton's second law. But the individual bodes themselves could have some very twisty motions. 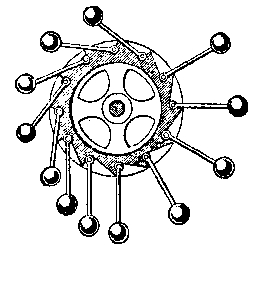 Are the motions of the central body and all the little pendulums expressible in a closed form assuming there's no gravity or motors or anything?

If you have $N$ joints, these are $N$ equations to be solved for the $N$ joint accelerations $\ddot{q}$.

In general there is not analytic solution, only for special cases

NOTE: The rotational velocity vector resulting from a sequence of rotations $R_1 R_2 \ldots R_N$ is

Not the answer you're looking for? Browse other questions tagged computational-physics kinematics rotational-kinematics rigid-body-dynamics or ask your own question.